President Donald Trump on Monday nominated 53-year-old Judge Brett M. Kavanaugh to replace Justice Anthony M. Kennedy’s seat on the Supreme Court, a pick that could establish a solid conservative majority in the court for years to come.

“I have often heard that other than matters of war and peace, this is the most important decision a President will make,” Trump said in the East Room on Monday night before the announcement, capitalizing on the inherent suspense of the moment, in good reality TV fashion. “What matters is not a judge’s political views, but whether they can set aside those views to do what the law and the Constitution require. I am pleased to say I have found without doubt such a person.”

Trump said Kavanaugh has “impeccable credentials, unsurpassed qualifications and a proven commitment to equal justice under the law,” and that he’s “one of the finest and sharpest legal minds in our time” who will apply the constitution “as written.”

Kavanaugh, a Yale Law School graduate who grew up in D.C. as the son of two lawyers, has a long, storied resume that seems tailor-made for a career in Republican politics, and was in many ways an obvious choice for the empty slot. The conservative judge has clerked for Justice Anthony M. Kennedy, whom he’ll potentially replace if confirmed; participated in the Ken Starr investigation of President Bill Clinton; represented former President George W. Bush in the Bush v. Gore recount trial; worked as staff secretary under George W. Bush; and, since 2006, served on the D.C. Court of Appeals. 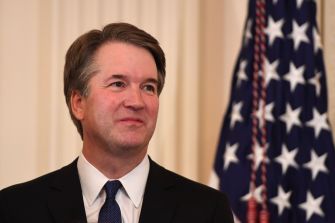 Still, like any other nominee would have, he likely faces a grisly confirmation battle in the Senate.

“Tomorrow, I begin meeting with members of the Senate,” Judge Kavanaugh said Monday night. “I will tell each senator that I revere the constitution. I believe that an independent judiciary is the crown jewel of our constitutional republic. If confirmed by the Senate, I will keep an open mind in every case, and I will always strive to preserve the constitution of the United States and the American rule of law.”

The markedly conservative Judge Kavanaugh has shown a taste for constitutional textualism and originalism, similar to that of the late Justice Antonin Scalia, about whom Judge Kavanaugh said, favorably, “he’s narrowed the areas of disagreement about how to interpret statutes.”

It’s hard to say how Judge Kavanaugh might view the Robert Mueller investigation, but a 2009 paper he wrote for the Minnesota Law Review, in which he argues Congress might consider writing a law exempting the president from criminal and civil suits while in office, provides a clue:

“A … possible concern is that the country needs a check against a bad-behaving or law-breaking President. But the Constitution already provides that check. If the President does something dastardly, the impeachment process is available. No single prosecutor, judge, or jury should be able to accomplish what the Constitution assigns to the Congress. … The President’s job is difficult enough as is. And the country loses when the President’s focus is distracted by the burdens of civil litigation or criminal investigation and possible prosecution.”

Abortion is another issue that has liberals worried in light of a probable conservative majority in the high court. After all, Trump promised during his campaign that he’d nominate pro-life judges who’d overturn Roe v. Wade.

In his 2006 confirmation hearing for the D.C. appellate court, Kavanaugh called Roe v. Wade the “binding precedent of the court” and said he would follow it “faithfully and fully… It’s been reaffirmed many times.” To be sure, that’s how Kavanaugh said he’d rule as an appellate judge, whose duties are to abide by Supreme Court precedent. It’s unclear whether he’d follow the Roe v. Wade precedent as “faithfully and fully” in his role as a Supreme Court justice.

“Sitting on a different court, he might be prepared to have a different view,” Adam Liptak of the New York Times said on Tuesday’s episode of The Daily podcast.

Still, more likely than an outright overturning of Roe v. Wade is a slower chipping-away at abortion rights. As Adam Cancryn at Politico writes:

“Several abortion-related lawsuits are already percolating in the lower courts. The Supreme Court justices could soon have opportunities to weigh in on a common second trimester abortion procedure or on whether a woman can get an abortion after a fetus is diagnosed with an abnormality. Both are key issues that could reopen the debate over the Roe ruling and the future of abortion rights.”

Kavanaugh has also said the Consumer Financial Protection Bureau is unconstitutional, ruled in favor of the National Security Agency’s call record surveillance operation, and argued for an expansive interpretation of presidential powers, going so far as to say the president could opt not to enforce the Affordable Care Act even if it’s ruled constitutional by a court.

Republicans currently hold a tight 51-to-49 majority in the Senate. With Sen. John McCain (R.-AZ) hospitalized and too sick to travel, the GOP needs every single. In the coming confirmation battle, the most decisive votes will likely be from two of the most moderate Republican senators, Susan Collins (R-ME) and Lisa Murkowski (R-AK), both of whom have expressed a pro-abortion rights stance.

“Judge Kavanaugh has impressive credentials and extensive experience, having served more than a decade on the D.C. Circuit Court of Appeals,” Collins, who supported the nomination of Justice Neil Gorsuch in 2017, of said in a statement. “I will conduct a careful, thorough vetting of the President’s nominee to the Supreme Court, as I have done with the five previous Supreme Court Justices whom I have considered. I look forward to Judge Kavanaugh’s public hearing before the Senate Judiciary Committee and to questioning him in a meeting in my office.”

The Big Think+ team is thrilled to present 20 brand new videos! How does an astronaut bridge cultural divide? This month, take new perspectives on the interesting world we work […]