Brett Kavanaugh and Christine Blasey Ford, who says he sexually assaulted her in the early 1980s, testified before the Senate Judiciary Committee on Thursday.

Ford testified for about four hours starting in the morning. Kavanaugh followed.

In some ways, both of their tearful testimonies came off as credible and sympathetic, and it’s not a stretch to suggest that someone who happened to turn on the TV on Thursday, and had no prior knowledge of the political debacle, would come away believing whichever person happened to be testifying at the time.

But the inescapable math, assuming no faults of memory, says one of them is lying.

Ford, wearing eyeglasses and a dark blue suit, remained composed throughout the questioning, despite her voice breaking at times. In asserting that she was absolutely sure it was Kavanaugh who had sexually assaulted her, she was respectful to all members of the committee, including the Republican senators and the outside counsel who asked questions on their behalf, Rachel Mitchell, who leads the special-victims division of the Maricopa County attorney’s office in Arizona.

In his opening statements, Kavanaugh was both angry and tearful as he described how the allegations have impacted him and his family in recent weeks. He then described his high-school days, the era in which the assault allegedly took place, in an imperfect but likely relatable light, painting himself as a work-hard-play-hard kind of student who enjoyed drinking beer with his football friends but also valued school, church and family.

Categorically denying every allegation levied against him, Kavanaugh repeatedly reminded the committee that the four witnesses who were said to be present at the gathering where the alleged sexual assault took place had all denied being there, and he expressed indignation at every turn for having to answer to allegations that he not only considers false, but also part of a Democratic conspiracy.

Here are some of the key moments from Ford’s and Kavanaugh’s testimony.

Kavanaugh said that he likes beer, still likes beer, and perhaps had too many beers at times when he was younger. However, he was sure to paint his past drinking habits in a light of moderation, saying he’d never blacked out, passed out from drinking alcohol or woke up in a strange location after drinking.

“There is a bright line between drinking beer, which I gladly do, and which I fully embrace, and sexually assaulting someone, which is a violent crime,” he said. “If every American who drinks beer, or every American who drank beer in high school, is suddenly presumed guilty of sexual assault, we’ll be in an ugly new place in this country.”

Kavanaugh: This is Revenge on behalf of the Clintons

Kavanaugh suggested that the efforts by Democrats to ruin his reputation and block his nomination were part of a cynical political plot–one he suggested is being executed on behalf of the Clintons.

“This whole two-week effort has been a calculated and orchestrated political hit fueled with apparent pent-up anger about President Trump and the 2016 election, fear that has been unfairly stoked about my judicial record, revenge on behalf of the Clintons and millions of dollars in money from outside left-wing opposition groups,” Kavanaugh said. “This is a circus. The consequences will extend long past my nomination; the consequences will be with us for decades.”

Kavanaugh: The Swetnick allegation is a farce

“The Swetnick thing is a joke, it’s a farce.”

“Would you like to say more about it?” Feinstein asked.

“No,” Kavanaugh said, eliciting a laugh from the audience. 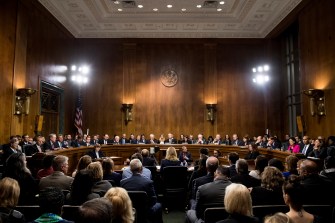 Why not conduct an FBI investigation?

In his five minutes of questioning, Sen. Dick Durbin (D-IL) referenced a quote from Kavanaugh’s opening statement in which he said he’d “welcome any kind of investigation. Durbin, after noting that Kavanaugh himself had relied on FBI work during his work on the Starr report in the Clinton era, repeatedly pressed Kavanaugh to request an FBI investigation, and asked him whether he thought an FBI investigation would be the best way to proceed.

“What do you think is best, personally?” Durbin asked.

Kavanaugh was silent, seeming to stumble for the first time of the afternoon, finally suggesting after a few beats that these allegations were sprung on him and are harmful to his family.

Following Durbin’s questioning, Sen. Lindsey Graham (R-SC) roughly criticized the tact taken by his Democratic colleagues, saying it was the most “unethical sham” he’s seen in his political career.

“You’re looking for a fair process, you came to the wrong town at the wrong time, my friend,” Graham said.

Graham asked Kavanaugh if he’s been through hell in the wake of the allegations.

“I’ve been through hell and then some.”

“This is not a job interview, this is hell.”

“With what degree of certainty do you believe Brett Kavanaugh assaulted you?” Durbin asked Ford.

“One hundred percent,” she responded. 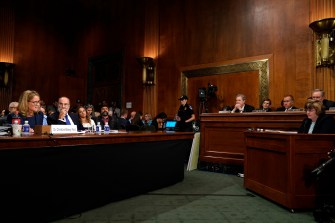 A fear of flying

Ford said that she has claustrophobia and a fear of flying. She said that, because of these conditions, she had hoped the committee would come to her in California so she could avoid flying, but during her testimony said she later realized that would have been an “unrealistic” request.

In an apparent attempt to discredit Ford, or to suggest that Democrats had wanted to necessitate a public spectacle in Washington, D.C., Mitchell kept pressing Ford on her phobia of flying. Mitchell asked Ford, who lists “surf travel” as an interest on her C.V., whether she’d ever flown to the French Polynesian islands for leisure.

“I also saw on your CV that you list the following interests of travel, and you, in parentheses put ‘Hawaii, Costa Rica, South Pacific islands, and French Polynesia,'” Mitchell said. “Have you been to all this places?”

Ford said that the most unforgettable part of her experience was the laughter.

“Indelible in the hippocampus is the laughter. The uproarious laughter between the two, and their having fun at my expense,” Ford said, referring to Brett Kavanaugh and his friend Mark Judge, who she says was in the room.

She added: “I was underneath one of them while the two laughed…Two friends having a really good time with one another.”

Ford said that she’s developed several neuroses as a result of her sexual assault experience. One of those conditions is claustrophobia, which Ford said led her to install a second front door during a remodeling of her home.

“I had completed an extensive remodel of our home, and I insisted on a second front door, an idea that he and others disagreed with and could not understand,” she said. “In explaining why I wanted to have a second front door, I described the assault in detail. I recall saying that the boy who assaulted me could someday be on the U.S. Supreme Court and spoke a bit about his background. My husband recalls that I named my attacker as Brett Kavanaugh.”

Some of these trends may be due, in part, to the lockdown.
Up Next
Neuropsych

Have you seen the new Big Think?

Notice anything different? The biggest ideas of the 21st century just got a makeover.