It’s a familiar scene: football players about to begin a play waiting at the line of scrimmage. The quarterback calls the play with a flurry of coded words, maybe a few visual gestures, and boom! Most of it flies by without making a lot of sense to fans, but the final shout of “hut” — or a bunch of “huts”—we know what that means. Action. But why “hut?” No one seems to know for sure, though there are some theories.

“I started when I was 12 years old and I’ve been hutting my way through football for 55 years—but I have no clue why,” Washington Redskins Joe Theismann tells The New York Times. As former Giants defensive end Justin Tuck has pointed out, “Can you imagine if they said, ‘Bacon-bacon-bacon? Everyone on the line would be like, ‘Where, where?’” Okay, so at least we know why bacon is a non-starter.

A flair for drama

For the first half of the 20th century, it wasn’t “hut” at all, but “hike,” and that seems to owe its use to pioneering football evangelist John Heisman, of the Heisman Trophy. 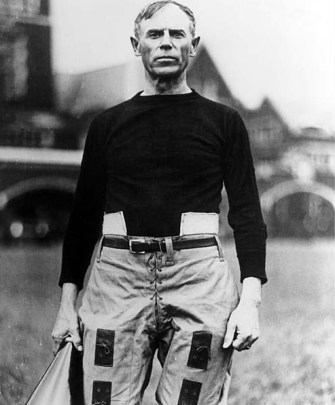 Heisman (1869-1936) brought a lot of what we know as football to the game, being uniquely well-positioned for the job as football’s first paid coach at a series of schools: Oberlin College, University of Akron—which was called Buchtel College when Heisman worked there—Auburn University (formerly the Agricultural and Mechanical College of Alabama), and Clemson University. Before coaching, he’d played the game himself at Brown.

Heisman helped popularize the forward pass, and he proposed dividing the game into quarters, both things that it’s now hard to imagine football without. Before he had his quarterbacks start shouting “hike” to trigger a play, athletes had used silent gestures to communicate. The Times suggests that Heisman, a part-time actor who had been an attorney before getting into professional coaching, liked the barked “hike” for its dramatic impact on the crowd as a huddle breaks. 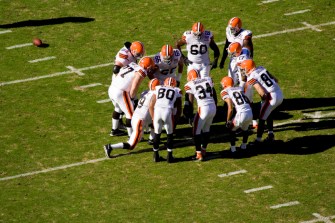 Heisman also came up with the idea of adding a post-huddle, disconcerting, sudden re-positioning of players just before a snap, a ploy he eventually supplemented with an unsettling shouting of a set of last-minute coded instructions at the line of scrimmage to further disorient the opposition. Which sometimes works. Giants center Weston Richburg tells The Times, “My friends outside of football ask me, ‘What’s all that chatter at the line?’ I tell them, ‘Ignore it, because we do.’”

Linguist Ben Zimmer has written at some length about the history of “hut,” and he’s confident that it goes most directly back to its use in the military, at least partially as an abbreviation for “attention-hut” or “tenhut,” which has been popular with drill sergeants since World War II. 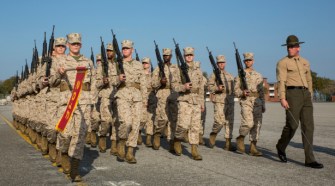 “Hut” also began being worked-in around the same time as a signal of the first beat for marching bands, as in “hut, two, three, four.” Zimmer cites a 1941 marching band guide that suggests, “Some substitute ‘Hup!’ or ‘Hut!’ for ‘one,’ to gain accent.” Eventually, it was pressed into service for other marches.

But wait, “hut” goes further back than that. By the 19th century, “hut” was in use as a popular command for rounding up farm animals, and it makes sense that rural recruits may have brought the command into the services with them. This could actually provide a better explanation as to why it’s used in both the military and in football. It works, whether that’s with farm animals, recruits, marching musicians, or football players.

By now, it’s what we expect to hear before the snap. Philadelphia Eagles center Jason Kelce tells the Times, “Some people have used ‘Go’ and that’s awful. That doesn’t sound like football.”

Experts caution about the dangers of the current technological revolution at the annual gathering of the World Economic Forum in Davos, Switzerland.