Ever been in a social group, having a great conversation or otherwise being human together, and someone opens their phone case and starts to drift off into text land, Instant Messaging someone, etc.?

A study recently proved what everybody already knows: that phone snubbing, a.k.a. phubbing, which is the practice of ignoring your current social company to text/surf on your phone, actually harms relationships.

More specifically, the study showed that the practice increases distance between romantic partners, but the results can be extrapolated to any human relationships.

Indeed, as the study asserts, “Internet addiction, fear of missing out, and self-control have been found to predict smartphone addiction, which in turn predicts phubbing behavior.” 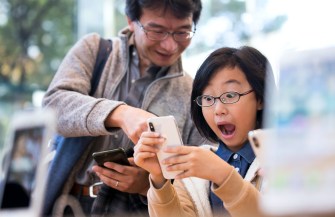 In the study, 128 people from ages 10 to 34 were put into three groups. The control group of 45 people would not experience phone snubbing at all, 45 were lightly phubbed, and 38 were phubbed extensively. As expected, people in the group that was not being phubbed reported much higher levels of what researchers called “need satisfaction” than members of the other two other groups.

Dr. Sally Andrews, a psychologist at Nottingham Trent University and the study’s lead author, told The Huffington Post in an email: “The fact that we use our phones twice as many times as we think we do indicates that a lot of smartphone use seems to be habitual, automatic behaviors that we have no awareness of.”

That adds up to a lot of screen time: as much as one-third of their waking lives, at five hours a day, for those who use them the most.

It’s something we all need to pay more attention to.

And even more from Tristan Harris.

This Is How The Milky Way Is Eating Our Galactic Neighbors

Two major galaxies in the local group are already in the process of being devoured by us… and each other.The Milky Way is the second-largest galaxy in our local group, which […]