Empathy is something that is measurable, and researchers at Michigan State University have done just that, for the first time.

If you had to guess, where do you think the United States ranks in empathy, worldwide?

I’ll give you a minute.

I’ll even give you a visual aide — the darker the red shading, the more empathy a country has: 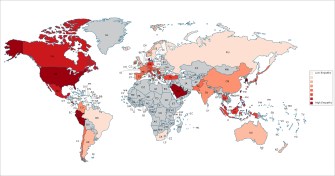 (Click map for more detail. Countries with small sample sizes were not included — hence the grey for a number of countries.)

And we could lose even more ground, based on a number of factors. Or gain ground, depending on how things go.

The study is based on responses from an online study that reached 104,000 people around the world and measured both compassion for others and the ability to imagine points of view of other people.

One of the interesting things about the study is that it doesn’t separate whether that empathy is for people from other countries or just people in our own. I highly suspect we’d slip even further down the list if that data were to be captured, given some of the extreme xenophobia we’ve seen arise over the last 18 months.

He’s studied apes for 50 years – here’s what most people get wrong.
▸
6 min
—
with
Frans de Waal
Up Next
The Present

Tesla’s Elon Musk gives a grave warning to those trying to hold back self-driving car technology. According to him, we have it all backwards.