Resurgence in psychedelic research is picking up after a 50-year hiatus. With a recent admission that Nixon’s war on drugs was really an attempt to quiet minorities and radicals—psychedelics being swept into this mess—few researchers have been bold enough to conduct controlled studies, regardless of how little recreational and ceremonial usage has not waned.

A new study in Nature further explores the therapeutic potential of LSD as a tool for emotional regulation. Forty participants, 29 of whom had no prior experience with LSD, were given a dose of 100 μg or 200 μg (the researchers consider this comparable to a recreational dose) or a placebo. Then they waited seven hours.

Participants were then given a variety of psychological tests, including ones focusing on facial recognition and empathy. The goal was to see how LSD affects cognitive and emotional empathy scores. Interestingly, there was a decrease in cognitive empathy and an increase in emotional empathy, leading the researchers to conclude that LSD has the potential to increase empathy and prosociality by decreasing the ability to recognize negative emotions.

This mechanism might seem strange—a decrease in ability to recognize facial expression is not a beneficial tool. In fact, it’s a mark of sociopaths. The decrease in the chart below is statistically significant, though not drastic. The higher the LSD dosage, the more the discrepancy. Interestingly, while all participants recognized anger and happiness, both evolutionary essential emotions to observe, a lower cognitive score yet higher emotional score on sadness is relevant.

Emotions are generated by our brain’s paralimbic structure, evolutionarily the oldest region (also known as the reptilian complex). While the brain’s three major regions are always in communication, in general we feel an emotion before the gating system in our prefrontal cortex decides whether or not the stimuli is valid. (People who suffer from OCD, for example, have a faulty gating system.)

There has been an argument that since modern humans lack knowledge of many survival techniques required of our ancestors, such as running from other animals and hunting and gathering, our danger is largely self-created. An emotional response to the lack of variety and challenge in our environment translates into elevated levels of cortisol, keeping our nervous systems on perpetual alert when no actual danger exists.

One of the many avenues this method of living can travel is depression. If LSD helps thwart our ability to cognitively recognize sadness while simultaneously creating more emotional caring, it makes sense that we would both be more social—less constraints and fears when associating with others—and show more concern about the feelings of others, instead of reverting into our own shells.

While not all of the markers in the chart below are statistically significant, it is telling how many emotions are affected by LSD usage. 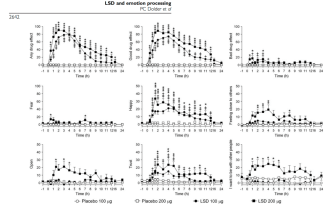 This caused the researchers to conclude:

LSD impaired emotion recognition of negative emotions and enhanced emotional empathy, particularly for positive emotional situations, and had subjective and behaviorally tested prosocial effects. These effects of LSD in healthy participants likely have translational relevance to LSD-assisted psychotherapy in patients and can be expected to reduce the perception of negative emotions and facilitate the therapeutic alliance.

One challenge with psychedelic research involves changing our understanding of how emotions affect cognition. A marker of modernity is emotional suppression, immediately using pharmaceutical intervention when experiencing a range of bodily feelings that might be somatic in origin: aspirin for a headache, opioid for back pain, SSRI for depression and anxiety. While these drugs certainly show benefits in certain individuals, the reflexive prescription trigger many professionals pull without emotional counseling is tragic.

Which is where psychedelics have the potential to intervene. Research in LSD, MDMA, and psychedelics in palliative and hospice care has shown tremendous success. While results can be measured quantitatively, the real effect is qualitative for those facing the end of their lives. Given the emotions involved in such a fate, any substance that might help regulate the response should be considered.

Like many substances, LSD was discovered by accident. Its history isn’t always pleasant, though given false accusations of its dangers from Nixon on down, public perception has not exactly been welcoming. We’ve reached an especially precarious social juncture; tensions are running high on a daily basis. Moving LSD and other psychedelics from the fringe provides one potential source for alleviating part of this tension. At a time when empathy and stronger social skills are required for cultural progress, a trip treatment is just what the doctor ordered.

Derek Beres is working on his new book, Whole Motion: Training Your Brain and Body For Optimal Health (Carrel/Skyhorse, Spring 2017). He is based in Los Angeles. Stay in touch on Facebook and Twitter.

He’s studied apes for 50 years – here’s what most people get wrong.
▸
6 min
—
with
Frans de Waal
Up Next
Neuropsych

New Research Shows Physical Activity Is a ‘Medicine’ Against ADHD

A new study shows that addressing the ADHD epidemic may require a dose of physical activity, so kids can refocus and learn effectively in a classroom.