While you live, shine.
Have no mourning at all.
Life exists a short while
And time demands its fee.

I’d like to do a little free-association exercise with you. I’m going to say three words and I’d like you to speak or write down all the words that come to mind as a result. No filtering. No judgment. Ready?

That’s pretty sad, I suppose. And maybe it anecdotally, non-scientifically supports a claim made by my guest today that culture and music, once mutually dependent, have become totally unmoored and lost in the age of globalism. And that the sounds we make and market today just don’t have anything like the healing power that was music’s purpose for thousands of years.

Christopher C. King is a writer, Grammy—winning music producer, and something of an ethnomusicologist. His obsessive collecting of rare ’78s led him to discover the music of Epirus, a region of northwestern Greece. To his ears, the playing of Kitsos Harisiadis, Alexis Zoumbas, and other Epirote masters virtually unknown outside of Epirus had an elemental power transcending even that of Delta Blues legends like Robert Johnson and Skip James. In Epirus, King found something he thought had been lost in the world: a musical culture with unbroken roots stretching back into prehistory. And some clues, perhaps, as to why we make music in the first place.

Lament From Epirus from Drew Christie on Vimeo. 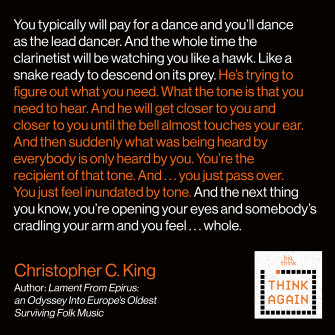 Why You Should Embrace Your ‘Geekdom’

Today — Friday, July 13 — people around the world will celebrate Embrace Your Geekness Day. The holiday celebrates people who are into “geeky” activities, such as “dungeon games, comic […]