Perspective and the right choice of colours can help to infuse a map with meaning, this one being a very good example. The map is entitled Europe From Moscow, and was featured in the Time Magazine issue of March 10, 1952.

At that time, the world was dominated by the Cold War between the Soviet Union and the United States. Even though the Nazis were defeated less than a decade ago, it seemed Europe – divided between American allies in the west and Soviet satellite states in the east – could become a theatre of war, if the Soviets were to push into Western Europe and ‘finish the job’ they started by virtually annexing the Eastern European countries they conquered in the Second World War.

Those countries are shaded in a lighter tone of red in this map, thus underlining the image of Communism seeping into Europe from Russia, making the ‘uncontaminated’ parts of Europe look threatened.

“The effective psychological strategy demonstrated by this map is an illustration of the powerfully innovative propaganda work achieved by R.M.Chapin, the primary cartographer for political maps in Time,” says the Newberry Library in Chicago about this map. 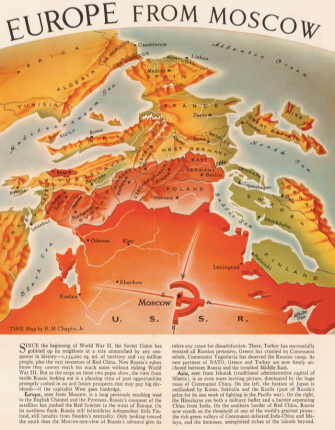 A Map of the World as a Cloverleaf