What a difference a century makes. On December 1st, this map of Europe will be exactly 100 years old. It portrays an almost unrecognisable place — a continent stalked by hunger and divided into countries that no longer exist. Strangely, some of those countries never properly existed at all.

The map was not produced for European consumption – excusez le mot. Rather, its target audience was American. More specifically, the youth of America. It’s the 1918 version of the age-old attempt to shame kids into eating their greens. Show your age by filling in the missing word in this sentence: “Finish your peas; there are kids starving in (…)” (1).

However, there was a bit more politics involved as well. This map was published mere weeks after the end of the First World War. Exhausted by the war effort, much of Europe was suffering from food insecurity, and in some parts, people were dying of hunger. 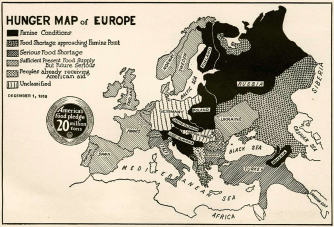 Everybody gets aid, or at least sympathy – except the ‘unclassified’ Germans and Austro-Hungarians.

The map shows six degrees of shortages in effect across the continent:

A seal of promise is affixed to the map: America’s food pledge — 20 million tons. 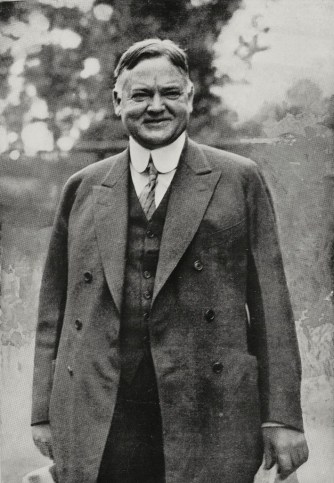 It’s from a pamphlet published in 1918 by the U.S. Food Administration (USFA), called Food Saving and Sharing, Telling How the Older Children of America May Help Save From Famine Their Comrades in Allied Lands Across the Sea.

Formed in August 1917, when a lot of America’s food production was shipped overseas to support its wartime allies, the USFA administered the U.S. Army’s food reserves overseas and managed food rationing at home – among other measures by promoting ‘meatless Mondays’ and ‘wheatless Wednesdays.’

The USFA urged Americans to eat less meat and sugar, finish their plates and plant food gardens. A so-called ‘School Garden Army’ counted 1.5 million “enlisted soldiers.” The Administration was run by Herbert Hoover, who had previously presided over the Commission for Relief in Belgium (and would go on to become U.S. president after the war). 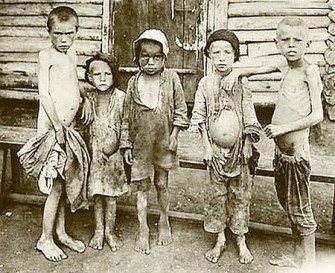 The armistice on November 11, 1918 effectively rendered the USFA purposeless, except that food deprivation was still very much an issue in post-war Europe. Hoover ensured the USFA was transformed, in February 1919, into the American Relief Administration (ARA) — again under his direction — which went on to send food aid to Europe until 1922 (20 percent going to Poland), and to Russia until 1923 (when it was discovered the Bolsheviks had resumed grain exports).

But we’re getting ahead of this map: published just after the war, it (and the pamphlet it came in) were meant to persuade its young readership that the situation in Europe was still critical, and that it was still necessary to keep up the good work.

After four years of all-out war effort focused on providing the armies with soldiers, material and rations, agriculture across Europe had suffered — to the point that rationing and hunger were common throughout the continent.

This was the case even in non-combatant countries such as Spain or Denmark: their produce was sold to the highest bidders abroad, meaning that the least fortunate locals could afford very little to eat for themselves. 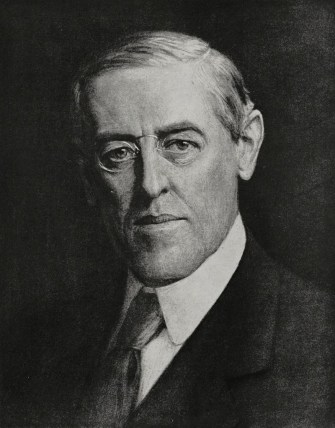 Even though this map predates the 1919 Treaty of Versailles, which created the post-war order, with such new countries as Yugoslavia and Czechoslovakia, this map already includes them in embryonic form. Both countries sprang from the Austro-Hungarian Empire, which collapsed at the end of the War.

This was in keeping with the U.S. President Woodrow Wilson’s famous Fourteen Points, proclaimed in January 1918. They promised “a just and secure peace,” based on disarmament, free trade and the right to self-determination of the various nationalities of Eastern Europe.” 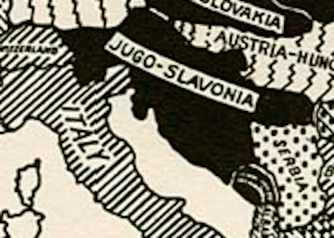 A prototype of Yugoslavia, reaching all the way to the Swiss border.

There never was a country called “Jugo-Slavonia.” This clearly is a prefiguration of what was to become Yugoslavia, “Land of the South Slavs.”

The concept of a single state for all South Slavic people had been around since at least the early 19th century, when it was promoted by the Illyrian Movement, a Croat-centred drive for cultural emancipation. It was the Serbian Parliament, in exile on the Greek island of Corfu, which in 1916 proposed (and in 1917 declared) the creation of a Kingdom of Yugoslavia.

Some in Serbia preferred the enlargement of the pre-existing Kingdom of Serbia with former Austro-Hungarian territory, but Russia’s February Revolution of 1917 removed the Czar, Serbia’s major sponsor, from the geopolitical chessboard. “Yugoslavia” as the expression of the national right to self-determination of all Slavic peoples in the Austro-Hungarian Empire gained the support of France and the UK.

On October 28, 1918, a State of Slovenes, Croats and Serbs was formed in the southern parts of the faltering Empire. On December 1 — the exact date of this map – this first, unrecognised incarnation of Yugoslavia joined the Kingdom of Serbia to form the Kingdom of Serbs, Croats and Slovenes. Colloquially known as Yugoslavia, that became its official name only in 1929. 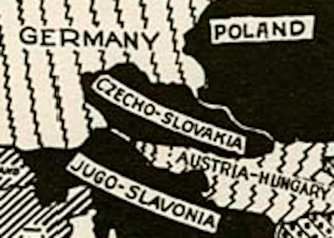 Czechoslovakia has a similar origin story as Yugoslavia. Czechs and Slovaks were Slavic people under the rule of the Austrian and Hungarian parts of the Empire, respectively.

The idea of Czecho-Slovak unity started taking shape at the start of the 20th century and was boosted by the events of World War I: neither Czechs nor Slovaks were keen to fight on behalf of their respective Austrian and Hungarian overlords against the Serbs and the Russians, fellow Slavic nations.

Czechoslovak independence was promoted by Tomáš Masaryk, who eventually gained Allied recognition and in October 1918 proclaimed the independence of the new country, becoming its first president. The boundaries and constitution weren’t fixed until 1920, which is why Subcarpathian Ruthenia, the eastern tail of the country, is not yet included in this map.

Czechoslovakia included large German- and Hungarian-speaking minorities and was a target of irredentist claims on both accounts. In 1938, Hitler annexed the Sudetenland, Czechoslovakia’s German-speaking western borderlands — a prelude to the Second World War.

Still hyphenated in this early incarnation, “Czecho-Slovakia” eventually became Czechoslovakia. After the end of communism in 1989, Slovaks demanded more autonomy and the re-instatement of the hyphen, to better reflect the country’s dual nature (and their equal place in it). That struggle eventually ended in the so-called “Velvet Divorce” of 1993, when Slovakia and the Czech Republic went their separate ways. 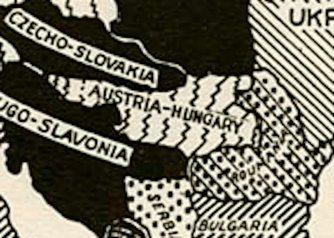 Austria-Hungary as it never existed.

The joint territory of the two post-imperial republics didn’t have much in common with its depiction on this map, though.
For one, Transylvania is still shown as part of Hungary. The area would go to Romania. The same goes for Subcarpathian Ruthenia, which would become part of Czechoslovakia.

And Austria looks all out of shape. Most of what would become the post-1918 Austria is shown as part of ‘Jugo-Slavonia’, including even the southern part of Tyrol that would be annexed by Italy.

The South Slavic state extends all the way to the Swiss and German border, and even touches Czechoslovakia. Those may have been either deliberate provocations or honest mistakes by the cartographer. The situation on the ground was very fluid. And at least the latter error was not as outlandish as it now seems. 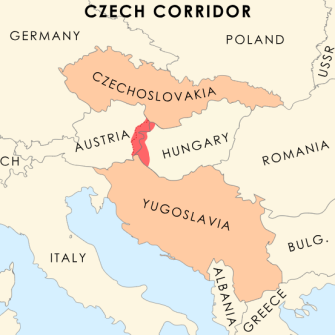 At the Paris Peace Conference of 1919, a so-called “Czech-Yugoslav Territorial Corridor” was proposed, to provide a land bridge between the new states of Czechoslovakia and Yugoslavia. At about 80 km wide, the corridor would have run for about 200 km along the border between Austria and Hungary, in the process also separating the latter two countries from each other.

According to the Czechoslovak nationalist Masaryk, who first launched the idea in 1916, the corridor would finally overcome “the division of the Czechoslovaks and the Yugoslavs” which was caused by the invasion of the Hungarians in… the 9th century.

It would also have cut off Germanic access to Central and Eastern Europe, increased Czechoslovak control over the Danube, and further isolated Hungary. The proposal was rejected: the area of the proposed corridor was inhabited mainly by Austrians and Hungarians, with less than 20 percent Slavs. 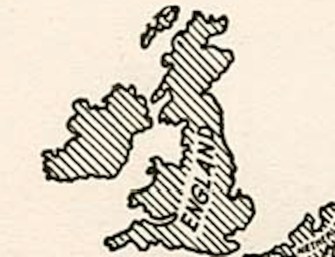 England, with its anonymous sister-nations.

The United Kingdom is mislabelled as just ‘England’ – a pars pro toto more common at the time than it is now. The country’s full name, for just a few years more, was: the United Kingdom of Great Britain and Ireland.

Although the British Army had managed to suppress the Easter Rising of 1916, Irish independence would be achieved in 1922 – albeit minus six mainly protestant counties in the north of the island. Since then, the country’s official name is the United Kingdom of Great Britain and Northern Ireland. 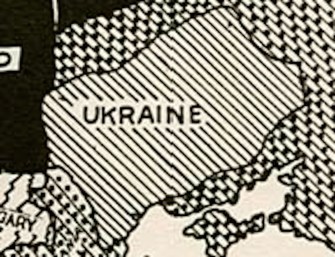 Just one of the many Ukraines that existed between the fall of the Russian Empire and the establishment of the USSR.

Ukrainian lands were divided between the Austro-Hungarian and Russian empires, and Ukrainians fought on both sides during World War I. The collapse of both empires created an opportunity for Ukrainian nationalism to assert itself. And assert itself it did, in a rapid, chaotic and bloody succession of states.

The pro-communist Ukrainian People’s Republic was succeeded by the anti-communist Hetmanate, which was overthrown by the Directorate (a re-incarnation of the UPR), which in turn gave way to the (pro-Soviet) Ukrainian Soviet Socialist Republic. And that’s not mentioning other short-lived incarnations such as the West Ukrainian People’s Republic, the Hutsul Republic and the Free Territory, an anarchist outfit defeated by Trotsky in 1921.

Given the date of the map and the extension of its territory (sans Crimea and western and eastern bits of present-day Ukraine, but with a more northerly extension), this looks to be the Hetmanate, which held sway from the end of April to mid-December 1918. 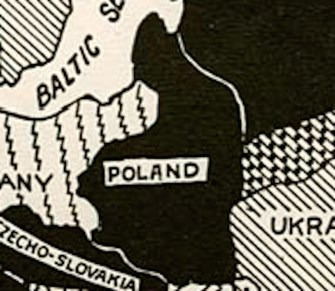 Poland, newborn and with its borders still wobbly.

Before World War I, there was no Poland on the map of Europe: Polish lands were divided among the German, Austro-Hungarian and Russian Empires.

During World War I, the Allies agreed that Poland should be re-established following the defeat of the Central Powers.
After the Armistice on 11 November 1918, the Second Polish Republic was proclaimed. The country asserted its independence in armed conflicts with most of its neighbours, notably the Soviets, with the Poles defeating the Red Army at the Battle of Warsaw in 1920.

This map provides Poland with provisional borders, giving it access to the Baltic via what was to become parts of Lithuania and Latvia, and not yet including parts of imperial Germany that would accede to the newly-independent state. 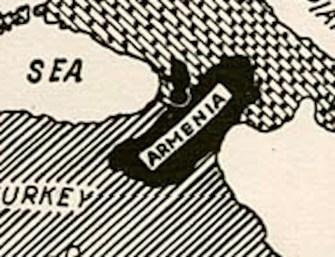 Modern Armenia was only ever this big on maps.

During World War I, a contingent of Armenian volunteers fought with the Russians against the Ottomans. Reprisals against the Armenian minority across Turkey escalated into what is known as the Armenian Genocide, resulting in the death of an estimated 1–1.5 million people.

Against that backdrop, Armenians on the Russian side of the border in May 1918 established the Democratic Republic of Armenia, the first independent Armenian state since the Middle Ages.

It was a state in crisis, flooded with refugees from Turkey and constantly engaged in armed conflict both internally and externally. At the end of 1920, the country was conquered by the Red Army, only to regain its independence after the fall of the Soviet Union in 1991.

Map found here at the Human Ecology Collection of the University of Wisconsin Digital Collections. For more on this map, see also this article onSlate.

(1) Ethiopia, Biafra, China, to name but a few options from decades past.

If you’ve ever wondered what truly lies beyond Neptune, this is one interview you won’t want to miss!Our Solar System formed some 4.6 billion years ago from a molecular cloud that […]