“The past,” as English writer Leslie Poles Hartley once quite quotably quipped, “is a foreign country; they do things different there.” I thought of that line when I saw this map, sent in by Michael Goodwin. The map summarizes world events for the year 1937, a year known to us mainly for not being the beginning of the Second World War quite yet. The events of the 1939-1945 war are by comparison very familiar, which – bizarrely – makes the tense but (mainly) peaceful year of ’37, now exactly 80 years ago, seem even more remote.

The map has a mysterious origin, as Mr Goodwin explains: “I found (this newspaper clipping) in an old atlas, bought at an estate sale in Philadelphia. It’s full of what people thought was important in 1937, some of which turned out to be important, some not so much.”

He adds, as to the strange label marking the Mediterranean as the ‘scene of (a) pirate hunt’: “It was a sideshow of the Spanish Civil War, when German or Italian submarines roamed the coasts off Loyalist-controlled Spain. Everyone knew whose submarines they were, but the German and Italian governments of course denied it. Which led to the diplomatic fiction that these were mysterious ‘pirate’ submarines.”

Below the map is this inscription:

“Any year will turn up a good many big news developments which can be most readily understood only when seen on a map. But few years, map-makers probably would agree, have produced more map stories than 1937. Among them two groups stand out: 1. Territorial changes wrought by the year’s two wars, in Spain and China; 2. Trails blazed around and over the top of the world by the year’s aviation pioneers. The maps above bring these, and 1937’s other major map stories, into focus.”

Here follows a more detailed look at the map. 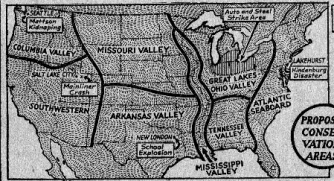 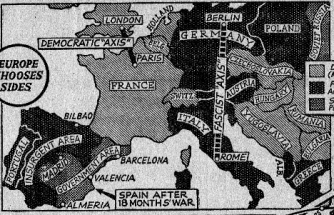 By 1937, the Old Continent was already divided into sides – not two, but three:

France and the UK constituted a ‘democratic axis’, which would spring into action only after the Nazi invasion of Poland on September 1, 1939. Other democratic countries, nonaligned with this axis, were Belgium, the Netherlands, Switzerland, Czechoslovakia, Hungary, Yugoslavia, Romania (then still called ‘Rumania’) and Bulgaria.

Germany and Italy had already formed their Axis of Steel (here called the ‘fascist axis’), but other non-axis countries are also coloured in authoritarian black: Austria, had a totalitarian government practising ‘austrofascism’, aligning itself with Italy in the vain hope of staving off the momentum for annexation by Germany, which would happen in 1938. Poland’s authoritarian government ruled under the guiding principle of ‘Sanacja’ (‘moral sanitation’), Albania was ruled iron-fistedly by the terrifically named Zog I, a former president who had proclaimed himself king. Greece was ruled by general Metaxas’ authoritarian August 4th Movement. Portugal was into the first years of Salazar’s right-wing ‘Estado Novo’ (‘New State’) which would continue until 1970. Spain’s left-wing government (here branded communist) was fighting an insurgency by the authoritarian generalissimo Franco, who by then controlled more than half the country and would go on to win the Spanish Civil War (in 1939) and lead Spain until his death in 1975. 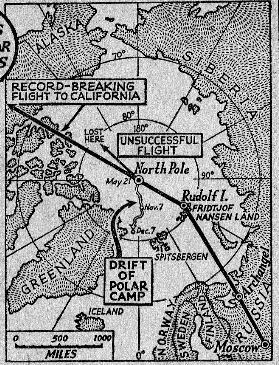 1937 was a year of polar firsts – mainly for the Soviets, a development surely watched with apprehension by the US. There was the amazing July flight of Sergei Danilin, Mikhail Gromov and A.B. Yumashev from Moscow to San Jacinto via the North Pole. The non-stop flight covered an record-breaking 10.148 km (6.303 miles), so amazing that some sources later wondered whether the flight wasn’t a carefully constructed hoax. It wasn’t the only transpolar flight of the year, though: another Soviet crew made it to Vancouver Island, indicating that transpolar aviation was quite the thing to do in 1937. The Soviets were very busy in the High North (as they are again now), since the drifting polar camp indicated on the map must be the one of Soviet explorer Otto Schmidt. 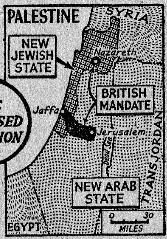 Already in 1937, there were proposals to partition the British mandate area of Palestine into a Jewish and an Arab state. The proposal, probably drawn up under the aegis of the League of Nations, doesn’t quite look like the first one of its successor organisation, the United Nations, 10 years later. The new Jewish state would occupy Galilee in the north, and a coastal strip divided by a separate area including Jerusalem and the coastal town of Jaffa. These would apparently both remain under British mandate, with the rest of the territory (Cis- and Transjordan) becoming a new Arab state.