In The American Language, H.L. Mencken quotes Robert Louis Stevenson’s paean to the American toponym: “There is no place in the world where nomenclature is so rich, poetical, humorous and picturesque as the United States […]”.

Mencken goes on to list such curious examples as Chemquasabamticook, Jackass Flat, Big Chimney, Stumptown, Matrimony, Walla Walla and Cement. As the lexicographer of the American tongue, he may be forgiven for repeating Stevenson’s claim. But the Scottish writer himself should have known better: surely, the greatest density of strange place names per square mile occurs in a small corner of his own country – two archipelagoes off Scotland’s northern coast: the Orkney Islands and the Shetland Islands. 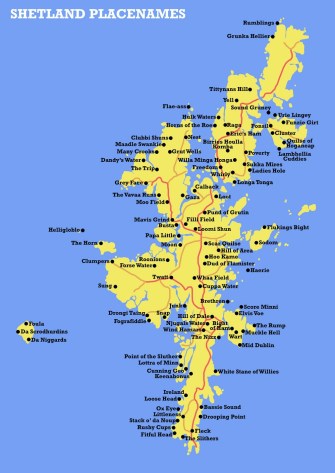 These two maps, both produced by Steve Goldman, show the place names in both groups of islands that he considers strange. “I’ve loved place names on Orkney and Shetland since I was a kid. They are by turns surreal, beautiful, nonsensical, rude, and bizarre… There seems to be no consistency to them at all”, says Goldman. “I’ve done some online research to try to find their derivation, but there seems to be little out there”.

Indeed, apart from Mr. Goldman’s suggestion to recycle some toponyms as band names (Whirly would be a good indie band, Brethren could be a bearded folk quartet, and Twisting Nevi a dance act, etc), there seems to be little sense to be made from Orkney/Shetland place names, except to enjoy them as mellifluous bizarrery per se.

Naturally, when we stopped laughing, we couldn’t resist testing Mr. Goldman’s hypothesis, and tried herding these toponyms into a few vaguely circumscribed categories. 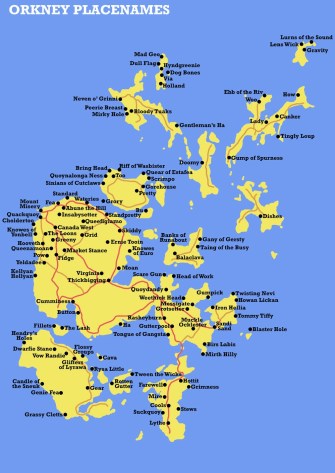 As one might expect on a collection of wind-blasted islands lost in the dark, chilly north, a lot of toponyms reflect a fair measure of doom and gloom. There’s a Mount Misery, and Muckle Hell. There’s Poverty and Grimness and Rumblings. There’s a Gutterpool, a Rotten Gutter, a Grotsetter and a Gorehouse. And – of course – a Doomy.

Perhaps this is why the locals liked to imagine themselves elsewhere. In Ireland, Holland or Virginia. There’s also a Canada West, and a Balaclava. Even more exotic, are two names of places that must seem rather hospitable from there: Gaza and Moon. One coastal place is called, quite specifically, Mid Dublin.

A remarkable number of places have monosyllabic names. It’s as if we’ve stumbled on the Lascaux Cave of toponymy. We witness how people practised their name-giving skills, learning to vocalise before they could improvise. You can almost hear them scraping their throats as they point to specific locations, baptising them Woo, Too, Bu, Ha, How and Pow. A second set of monosyllabic place names is already more complex, self-aware. The key one is Yell, summarising what went before. A few seem bent on defining primary places, Ur-locations: Fleck, Nest, Junk, Loot, Grid, Gear, Wart. But what about Snap, or Sung? Maybe these are a third, even more evolved set of monosyllabics, one-word poems that transcend the places they denote.

Quite a few places continue with poetic, even grandiose names. There’s Papa, and Lady. Pretty and Standpretty. Surreally, there’s a (fixed) location called The Trip. How about one called Freedom? Sounds nice. But there’s also Gravity, Littleness, Farewell, and a Fitful Head.

Poetry takes a surreal turn in a set of place names that sound like ritual incantations. Some even sound like the Indian place names that form such a substantial part of the melting pot that is Mencken’s American topography: Queefiglamo,Quoynalonga Ness and the improbably-named trio Quackquoy, Suckquoy and Quoydandy. Some sound more like the many names of Aboriginal origin on the map of Australia: Willa Minga Honga, Birries Houlla Komba, Kellyan Hellyan, Yeldadee and Choldertoo. Others sound like nothing else but gibberish and gobbledygook – those terms would indeed not be out of place in this set: Hyndgreenie, Insabysetter, Keenabonus, Fografiddle, Helliglobo, Drongi Taing, Loomi Shun and Da Scrodurdins.

Somehow, that last location sounds like it provides a good segway to the significant number of locations with rude or lewd connotations. Were those early Orkneyans and Shetlanders a cheeky bunch? Quite probably, the original meaning has nothing to do with the present, suggestive reading: Moan, Queenamoan and Twatt; Hendry’s Holes, Ladies Hole and Mirky Hole; The Rump, Howan Lickan and Longa Tonga; The Lash, Flae-Ass and Cumminess; Peerie Breast and Drooping Point. But then again: what else to do on those long winter nights?

Perhaps the best proof that those islanders are having us on, is a collection of ‘X of Y’ names. Where X and Y should be replaced by intelligible locator words, as in ‘Bay of Bengal’, or ‘Mouth of the Nile’. Now, Scots toponyms can be a bit puzzling – anyone know what a Mull of Kintyre is? Or a Firth of Forth? (No, it’s nothing to do with Colin Firth). But they’re taking things to extremes on the Orkneys and Shetlands. What in God’s name are Lurns of the Sound? The Ebb of the Riv? The Gump of Spurness? (The Scottish clan ancestors of Forrest Gump?)

Somehow, the Banks of Runabout sounds vaguely like a critique of the financial sector. And the White Stane of Willies might as well have been mentioned in the lewd paragraph. The Taing of the Busy? That’s that faint ringing noise that gets inside your head when you’ve been up for 24 hours straight. Also known as the Head of Work. The Knowes of Euro?The Candle of Sneuk? The Riff of Wasbister? We sort of know what half the name means. But how frustrating to have not even the glimmer of a clue about the Neven o’ Grinni, the Sinians of Cutclaws, the Glifters of Lyrawa, or the Quilse of Hoganeap.

If some place names sound like great band names, others could be fantastic stage monikers: Heeeere’s Ernie Tooin! And there are Tommy Tiffy and Sandi Sand! Again, Mavis Grind could have made a first appearance three paragraphs up. But who could resist the child-friendly matinee filled out by such glittering names as Genie Fea, Elvis Voe, Funzie Girt, Grunka Hellier and Urie Lingey?

If your tastes in entertainment are more attuned to the joys of rap, then this outpost of Scotland has a few remarkable surprises for you. Notably Da Niggards, Busta Little and, improbably, Tongue of Gangsta.

We could go on. You’ll find many more names on the maps. And if you, like us, are the kind of person that remains in their seat until the movie credits have rolled past, just to catch a few fantastic names among the hundreds scrolling by, you’ll have lots of fun finding Dull Flag, the Hill of Area, Hulk Waters and Gentleman’s Ha.

If the local tourist boards have any sense, they’ll put up signs at all of these places, and brace for the throngs of tourists rushing north to get their picture taken next to the ones that say Many Crooks, Flossy Groups and Hoo Kame. And many more…

Many thanks to Steve Goldman for sending in these maps, which can be found here and here on his website Mapfodder, which contains some more interesting cartographic paraphernalia.

Every minute costs two rubles, which means an hour costs 120 rubles ($3.80). For their money patrons get coffee, tea, toast, biscuits, and as much as they want.