How easy are cities to get around? These rose diagrams have the answer. They show how closely street layouts in selected cities align to the four cardinal directions. Simple diagrams reflect straightforward grids that make navigation easy. Complex diagrams equal ‘messy’ street grids, making it harder to find your way.

These rose diagrams (a.k.a. polar histograms) are the work of Geoff Boeing, a post-doctoral student of urban planning at UC Berkeley. The first batch shows the ‘cardinality’ of 25 U.S. cities. The second one does the same for 25 cities around the world.

The grids get a bit noisier in cities like Sacramento, St Louis, Philadelphia, and Detroit. Here, the histograms reflect that the streets are organized in more than one grid pattern. In some cases, the combination is purely a matter of place – for example, the city annexing a neighboring town with a differently-oriented street pattern. But history can play a role. 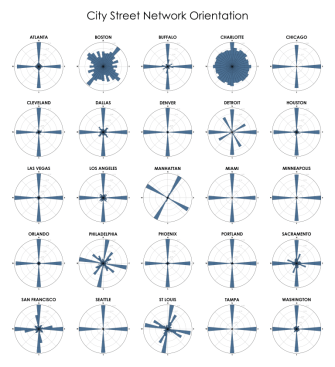 The American grid system was codified by Thomas Jefferson and became the standard method to divide up America, especially its newer territories west of the Mississippi. Its imposition can be seen ‘in action’ in the diagram for Detroit: originally oriented northeast-southwest on the riverfront, its later expansion was executed in line with the standard Jeffersonian grid, using Eight Mile Road as is baseline.

The two cities that stand out for their directional noise are Boston and Charlotte.

“We say the cows laid out Boston”, quipped Ralph Waldo Emerson in 1860. “Well, there are worse surveyors”. Many visitors find Boston’s street grid near impossible to navigate, and its diagram shows why: its streets are not at all lined up to compass bearings, making it much harder than in other American cities to draw a cognitive map of where you are, and where everything else is.

The blame rests not with Boston’s cows. The city’s directional chaos has more prosaic causes. For one, Boston’s age, with much of its center predating the gridding of other city centers. Also: gradual land reclamation in Boston Harbor has added to the city’s complex waterfront layout. And annexation of suburbs with separately-oriented grids has added to mess. As a result, Boston is one of America’s most ‘illegible’ cities. Natives confess that they navigate their city by its landmarks, not by the direction of its streets.

Downtown Charlotte has a straight street grid, but its neatness dissolves beyond the center. Incorporated in 1768, Charlotte experienced chaotic growth following a gold rush in 1799, with further spurts of growth during and after the Civil War, around the time of the First World War and more recently from the 1970s onwards, as a commercial and financial hub. What exactly makes it America’s worst-gridded city? Three reasons:

Another exception to the easy-peasy north-south-east-west grid is Manhattan. The New York borough has a fairly straightforward grid, but its orientation is off-center from the cardinal directions. A glance at a map will explain why: the grid is aligned with the shape and the northeast-southwest orientation of the island of Manhattan itself. As in many other North American cities, streets run one way (east-west), avenues the other (north-south), further facilitating navigation. 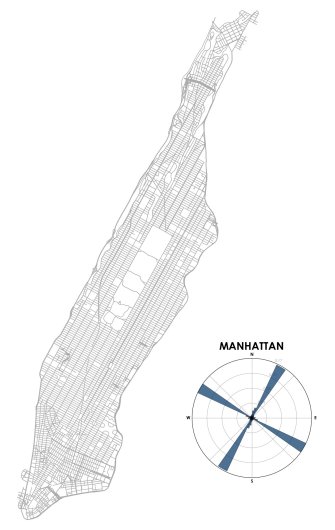 The second set, with rose diagrams of non-U.S. cities, is a lot noisier. That’s because it includes a lot of Old-World metropoles, which cores that go back centuries. Slower urban growth, defensive needs and the absence of automobiles for most of their history means they typically expanded in a circular, haphazard way rather than a linear and planned manner. 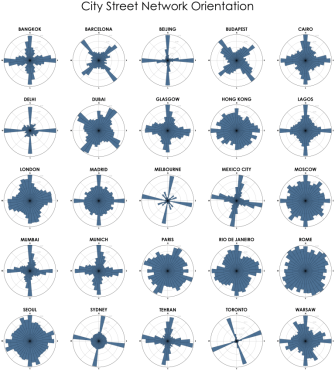 As the diagrams show, London is one of the more difficult cities to find your way around. The London taxi drivers’ exam requires candidates to memorize the streets and routes in a six-mile radius around Charing Cross station. On average, it takes them 3 to 4 years of intense study to acquire ‘The Knowledge’.

Going by their diagrams, other complex cities include Seoul, Paris, Rome and Rio de Janeiro. Moscow’s diagram looks noisy, but the streets do seem to be evenly spread among a number of sub-cardinal axes.

A number of cities have ‘fat axes’: a basic cardinality, complicated by a degree of deviation. Glasgow is one, and so are Munich and Mumbai. So are Mexico City and Tehran, albeit slightly off-center. Cairo is vaguely aligned to the cardinal directions because of its location on the Nile, which flows south to north in a fairly straight line.

A number of cities would fit in well into the U.S. selection: New Delhi and Beijing have straight, skinny axes, for example. And although a bit off-kilter, so would Toronto, Sydney and Melbourne – the streets of which, apparently, are oriented towards magnetic north rather than true north, hence the deviation.

Mr. Boeing’s work has inspired others to examine even more cities. 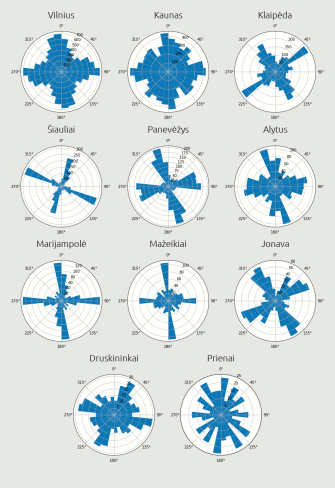 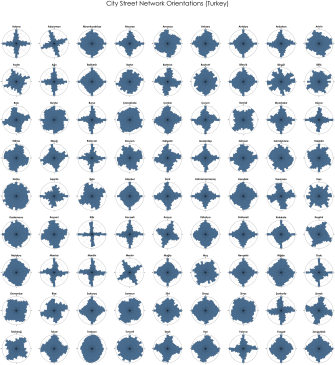 You can name a dozen rock stars on drugs, but can you name the philosophers who partook? We’re here to help.