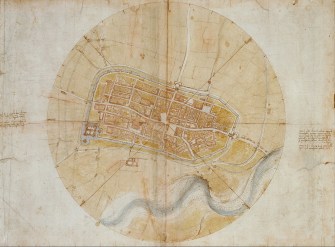 Across the world, people have altered the land to write messages that are invisible on the ground and can only be seen by – well, by whom, exactly? Airplane pilots and their passengers, hot-air balloonists, satellites, and the Great Mapmaker in the Sky. But why?

When is easier to answer, for this kind of message to the heavens above is a relatively modern phenomenon¹, which can be traced back to a map produced by Leonardo da Vinci.

Produced centuries before the launch of the first satellite, or even the first hot-air balloon, Da Vinci’s map of the Italian city of Imola (ca. 1502) is the world’s first straight-from-above map.

Until then, city maps had used the hillside (a.k.a. bird’s-eye) perspective, showing their subjects aslant. These panoramic pictures were pretty, perhaps; but usually inexact and certainly incomplete.

For his Imola map, Da Vinci used the ichnographic perspective – a concept developed by the Roman architect Vitruvius to describe the art of drawing realistic ground plans, as if observed from directly above.

Out with the oblique perspective went symbolism and embellishment. Today, virtually all maps are ichnographic – hard data observed straight from above.

The change is part of a larger paradigm shift, from a theocentric worldview to a human-centered one. From time immemorial, people have felt the gaze of Higher Authority bear down on them from on high.

But something crucial in that relationship started changing in the Renaissance. The increasingly accurate attempts at depicting the world from above brought down a new kind of scrutiny: quantifiable measurements instead of moral judgments.

And that warrants a different kind of response. You converse with the divine by building temples, churches, and mosques that reach skyward with magnificent domes and spires. You can talk back to the Great Mapmaker in the Sky in a more vernacular language. Like showing him a map of your state; or spelling out the name of your favorite car brand; or building the world’s biggest guitar out of trees. 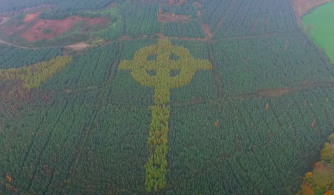 The cross became visible with the turning of the leaves in the fall of 2016.Image: YouTube

In 2016, air passengers flying into Derry airport in Northern Ireland spotted a giant Celtic cross in the treetops of Killea, just across the border in country Donegal, in the republic of Ireland.

The figure, more than 100 m long and 70 m wide, is named the Emmery Celtic Cross in his memory. According to local horticultural experts, Emmery’s cross could remain visible for up to the next 70 years. 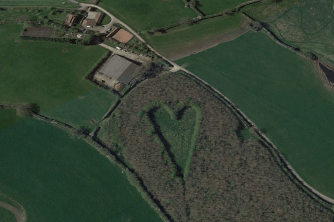 The heart is farmer Winston Howes’ monument to his wife Janet, who died in 1995. Image: Google Earth

When Janet Howes died suddenly in 1995, her heartbroken husband of 33 years was determined to build her a lasting memorial. Winston Howes planted thousands of oak saplings on a six-acre field near his farm in Wickwar, Gloucestershire.

In the middle of the field, he left a heart-shaped area clear of trees; the heart’s point is oriented towards Wotton Hill, Janet’s childhood home. The trees have now grown to create a heart-shaped oasis for Winston to remember his wife in.

The remarkable monument to love cannot be seen from the road, and remained a secret until it was noticed in 2012 by a passing hot-air balloonist. In spring, daffodils come up in the clearing, enhancing the beauty of Mr Howes’ bittersweet retreat. 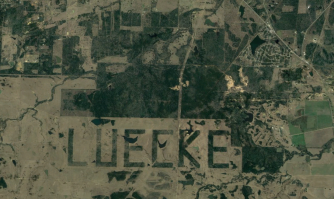 The ‘autograph’ is so large that NASA has used it to calibrate its orbital instruments. Image: Google Earth

In the early 1980s, Jimmie Luecke struck it rich in the chalk oil boom in Texas. With his seven-figure oil fortune, he went into the cattle business, and bought a ranch 50 miles east of Austin.

When clearing new grazing land in the late 1990s, Luecke had the luminous idea to leave large, long strips of pine forest untouched, creating a 2.5-mile long version of his name, in capital letters – surely, the largest autograph the world has ever seen.

It’s a signature so large that NASA in 2003 used it to calibrate the spatial resolution of the photographs taken by its astronauts. It’s also a familiar sight to pilots and passengers flying in and out of Houston airport. 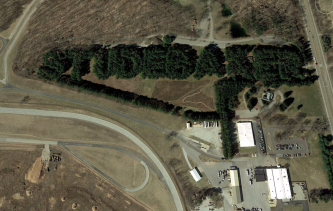 Studebaker, the U.S. car brand, has been dead since 1966. But Studebaker, the forest, lives on. Rows of trees still communicate the name to the heavens at the defunct manufacturer’s former proving grounds, now Bendix Woods County Park, due west of South Bend, Indiana.

In 1926, Studebaker was the first U.S. car manufacturer to inaugurate an outdoor proving ground. In 1937, when Studebaker was still merrily churning out Commanders, President,s and Dictators (sic), the company planted 5,000 pine trees there to spell out its name.

Rumors that the former proving ground also was a Studebaker graveyard was confirmed when the remains of a number of never-produced prototypes were found. Only a few were in a well enough state to be rescued, including a Champion station wagon now on display at the Studebaker National Museum in South Bend, Indiana. 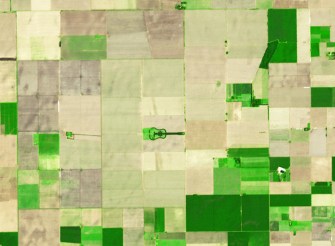 Breaking the monotony of the Pampas squares – the unexpected shape of a guitarImage: NASA Earth Observatory – public domain

From the sky, Argentina’s fertile Pampas are parceled out into an interminable tapestry of squares in all possible sizes and combinations. But that monotony is broken near the town of Laboulaye by the recognizably round shape of a guitar.

The instrument was created in 1979 by local farmer Pedro Martin Ureta, as a tribute to his wife Graciela, who sadly died during childbirth two years prior. The guitar is made up of more than 7,000 cypress and eucalyptus trees, and stretches two thirds of a mile across the landscape.

The guitar is huge enough to be observed not just by planes flying overhead, but also from space. This image was taken in November 2007 by the Advanced Thermal Emission and Reflection Radiometer (ASTER) on the Terra satellite. 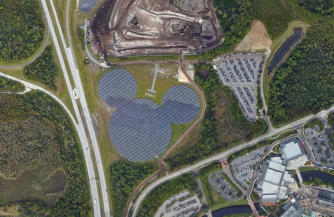 Rather understandably, the Disney Corporation has a Mickey Mouse fetish. It makes a sport of inserting ‘hidden Mickeys’ into the landscape, which often can only be observed from above.

There’s one in Disneyland Drive, leading into the corporation’s theme park in Orlando, Florida. There used to be a Mickey-shaped forest just north of the park, but that’s been felled.

A more recent incarnation is the unmistakeable shape of Mickey Mouse’s mug made up of 48,000 photovoltaic cells, spread out over 20 acres, producing an average of 10.5 million kWh per year. 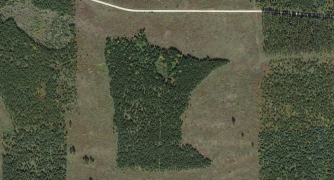 This Minnesota-shaped forest started as a clearing back in the 1990s.Image: Google Earth

This homage to Minnesota was created on state forest land, managed by the DNR Division of Forestry. It is located about 4 miles south of Faunce, in northern Minnesota’s Forest Area Township, halfway between Red Lake and Lake of the Woods.

Back in the 1990s, forest engineer Bill Lockner was tasked with clearing away dying pine trees when he allowed himself some fun in the process. He cleared an area with the exact contours of the North Star state.

Over the years, younger trees grew up in the clearing; and when in the early 2000s the surrounding older-growth pines were cut, what was left was the current Minnesota-shaped forest.

Do you know of any other geoglyphs or other types of land art that were made specifically and exclusively for being observed from above? Let me know at strangemaps@gmail.com.

(1) Despite ongoing uncertainty about their age and purpose, ancient geoglyphs such as the Nazca Lines or the so-called White Horses of England can be observed from nearby elevations, and thus were most likely not made for being observed from above.

One of the best-known allegorical depictions of love has a rather pessimistic male twin.
Up Next
The Present

American homes are big and polluting. Here’s how to fix that.