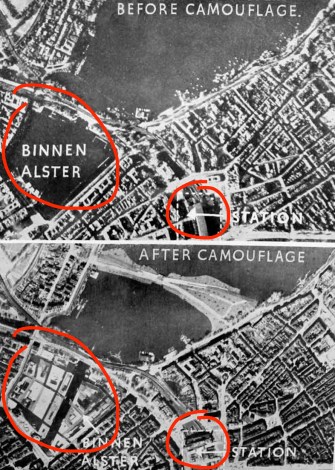 Before and after: the Binnenalster and Hamburg’s central train station.

Now you see it, now you don’t: these images, taken by the Royal Air Force in 1941, show how the same part of Hamburg suddenly looked very different from above.

This large-scale deception was meant to deceive Allied bombers into dropping their payload on strategically less important parts of the city. The Nazis called it Operation Tarnkappe (‘Operation Invisibility Cloak’), but that name was far too optimistic. 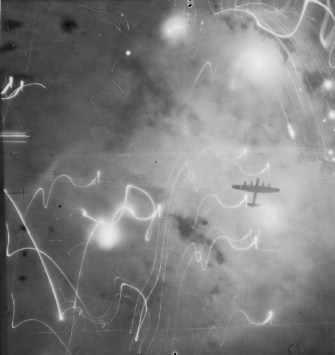 RAF Lancaster bomber over Hamburg during an attack on the night of 30-31 January, 1943.

Many attempts at deception

Firstly, because the British bombers targeting Hamburg didn’t orient themselves on the Alster lakes. They were guided in by the Elbe, Hamburg’s major river.

But most of all, because the Brits caught on quickly to the deception. In fact, the London papers reported on the operation soon after its completion. On July 1941, several published these ‘before’ and ‘after’ images.

Operation Tarnkappe was but one of many attempts to deflect the attention of Allied bombers from valuable targets on the ground. Just around Hamburg, the Nazis faked 80 air strips and 32 industrial and traffic installations, while they attempted to cloak real factories, military installations and even Hamburg City Hall.

When the Alster froze in the cold winter of 1940/41, the Nazis planted hundreds of pine trees on the Alster, hoping to trick Allied pilots into thinking they were flying over a forest, instead of the centre of Hamburg.

None of that really made a difference. 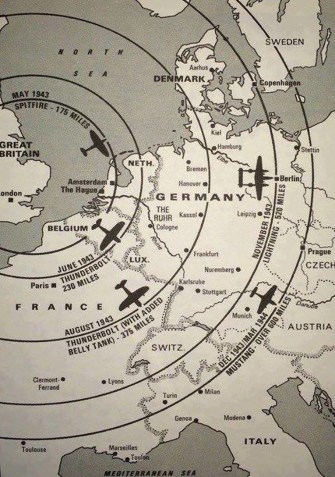 As the range of Allied fighter craft expanded, bombing raids deep into Germany became relatively safer for the air crews.

As a major industrial center, home to shipyards and harbor for U-boats, the port city of Hamburg was an important target for Allied bombing raids throughout the war.

After concentrating on the industrial Ruhrgebiet in western Germany, closer to the UK, Allied Bomber Command eventually started paying its deadly visits to Hamburg.

In July 1943, the Allies unleashed Operation Gomorrah, history’s heaviest aerial bombardment yet. It created a huge firestorm that killed more than 42,000 civilians and completely destroyed 21 km2 (8 sq. mi) of the city. 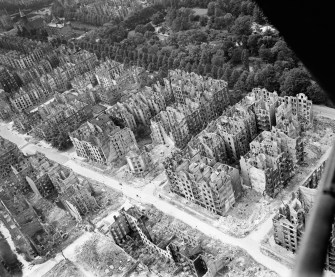 The district of Eilbek, totally wiped out by the firestorm caused by Operation Gomorrah.

During the worst night of the attacks, asphalted streets burst into flame, the fiery tornados swept people up into the sky, and many more died of asphyxiation in bomb shelters as the fires consumed all the oxygen in the city above.

A million people fled the city, which saw its production capacity severely handicapped for the rest of the war. After the war, the level of destruction was compared to that of Hiroshima.

Destroying further German cities by firestorm was subsequently called ‘hamburgisation’ by the Allies; a reply in kind to Joseph Goebbels’ cynical invention of the verb ‘coventrisieren’ to describe the wholesale destruction of a city by aerial bombardment (in reference to the German air raid on Coventry of 14 November 1940). 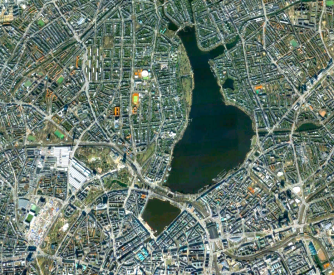 Central Hamburg today, with the Außenalster and Binnenalster – and even the train station – clearly visible.

There are nearly 100 towns named “Troy.”
The Present

Break into London Zoo? Illegal, but it would improve the London Circle Walk
The Present

Surveillance is pervasive: Yes, you are being watched, even if no one is looking for you

Video cameras on city streets are only the most visible way your movements can be tracked.
Health

Cycling – active transportation or death trap?
Up Next
Health

Once again, sugar-rich processed foods are shown to increase the likelihood of anxiety.