Israel has not joined the lunar club. Due to engine failure, Beresheet was unable to perform its scheduled landing. Mission control lost contact with the craft, which was destroyed in an uncontrolled, hard landing today 11 April 2019 at 3:23 pm (Eastern Time).

At a cost of $100 million, Beresheet — a collaboration between Israel Aerospace Industries and SpaceIL — was a space mission on a shoestring. Had it been successful, Beresheet could have inaugurated an era of low-cost lunar exploration. 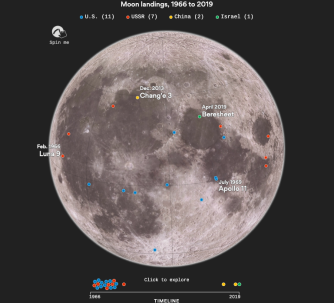 The four lunar superpowers in one map: the Soviets (Luna 9), the Americans (Apollo 11), the Chinese (Chang’e 3) and the Israelis (Beresheet).

Four countries on the moon

Beresheet is the first word in the Hebrew Bible, often translated as “In the beginning” (or “Genesis”). It’s also the name of an unmanned Israeli spacecraft that is scheduled to land on the moon this Thursday at around 10 p.m. Israeli time — 3 p.m. ET.

Close to that time, check Contact GBS for updates and a live feed of the landing.

If and when Beresheet successfully touches down in the Sea of Serenity, Israel will be only the fourth country to land a craft on the moon. Only the United States, the Soviet Union and China have already done so.

The Israeli craft will break a few records of its own. Privately funded, Beresheet will be the first non-governmental space ship on the moon. With a height of just 5 feet (1.5 m) and weighing no more than 1,322 pounds (600 kg), it will also be the smallest lunar lander ever.

The craft is equipped with cameras to snap pictures of the lunar surface and equipment to measure the moon’s magnetic fields. But the trip is also about national pride and remembrance: Beresheet carries an Israeli flag, a copy of the country’s Declaration of Independence, and a recording of the national anthem — plus a bible and a digital time capsule containing, among many other things, the Jewish Traveler’s Prayer and the testimonial of a Holocaust survivor. 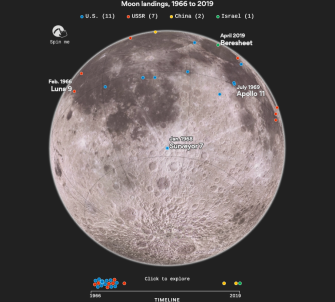 Beresheet will be landing in the middle of the Sea of Serenity, in a relatively crowded area (as lunar regions go): roughly halfway between the landing site of Apollo 15, which touched down in July 1971 and that of Luna 21, a Soviet mission that landed in January 1973.

Meanwhile, the Chinese rover that landed last January with the Chang’e 4 mission has the far side of the moon all to itself.

To date, there have been 20 successful soft landings on the moon, and this fantastic interactive map dates and places them all. Clicking on a dot on the timeline will spin the lunar globe to reveal the landing site. You can click your way through the various stations of lunar landing history.

As the timeline shows, the busiest decade in lunar history was bookended by Luna 8, which landed in February 1966, and Luna 24, touching down in August 1976. It feels like the Soviets wanted to have the last word in a dialogue dominated by the Americans, who landed 11 craft on the moon (including six manned ones) versus the USSR’s seven.

After Luna 8: almost half a century of nothing, until December 2013, when China joined the lunar club with Chang’e 3. 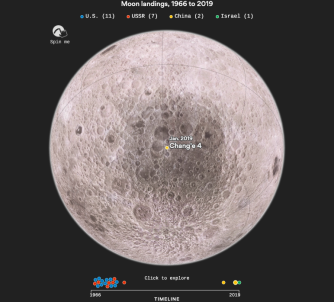 China has the far side of the moon all to itself. Image source: Harry Stevens / Axios

The Chinese side of the moon

Surveyor 1, the second craft on the moon and the first American one (in June 1966), chose a landing site relatively close to Luna 9. The next one, again Soviet (Luna 13, December 1966) also landed nearby — as did the fourth craft, America’s Surveyor 3 (April 1967).

The U.S. then outpaces the USSR: the next five craft are all American — three more Surveyors, then Apollo 11 and 12, manned missions staying remarkably close to ground previously reconnoitered by the unmanned landers.

In September 1970, the Soviets land Luna 16 not that far from the Apollo 11 landing site, as if attempting to intimidate the Americans. But their next mission, Luna 17 (November 1970), takes them far away from the U.S. landing sites. It’s the Americans who give chase now: in July 1971, Apollo 14 lands on the shore of the Sea of Rains opposite the one where Luna 17 came down.

The Soviets mirrored the move in January 1973, when they set Luna 21 down on the edge of the Le Monnier Crater, not far from where the Americans had landed Apollo 17 just one month earlier. That was the last manned mission to the moon, as well as America’s last lunar landing, effectively ending the off-world game of superpower chess, with lunar landers for pawns.

Remarkably, nearly all landings took place on the darker spots on the lunar surface, the so-called maria (singular: mare). These ‘seas’ are actually dark, basaltic plains formed by ancient volcanic eruptions that cover about 16% of the lunar surface, mostly on the near side of the moon.

The Chinese landing in January was the first one on the far side of the moon — ‘dark side of the moon’ is a misnomer, as it gets just as much sunlight as the side locked into our field of vision.

As the rise of commercial spaceflight further reduces launch costs, other countries or companies may now feel it is within their grasp to join the lunar club. True to its name, Beresheet could be at the beginning of a new rush to the moon.

Israel has not joined the lunar club. Due to engine failure, Beresheet was unable to perform its scheduled landing. Mission control lost contact with the craft, which was destroyed in an uncontrolled, hard landing today 11 April 2019 at 3:23 pm (Eastern Time).

At a cost of $100 million, Beresheet – a collaboration between Israel Aerospace Industries and SpaceIL – was a space mission on a shoestring. Had it been successful, Beresheet could have inaugurated an era of low-cost lunar exploration.

To spin the moon and explore the history of lunar landings, click here at Axios.

What lies in store for humanity? Theoretical physicist Michio Kaku explains how different life will be for your descendants—and maybe your future self, if the timing works out.
▸
with
Michio Kaku
Up Next
Career Development

The Taoist idea of wu wei is deeply rooted in Chinese culture. Often translated as “non-doing” or “non-action,” it’s an effortless state in which you’re not explicitly aware of yourself […]