What’s in a name? Shakespeare thought a rose would smell as sweet by any other name. In Romeo and Juliet, the Bard used that simile to opine that names are merely labels for whom we love, and as such don’t really matter. Yet the play’s dramatic ending proves the opposite: Its titular lovers are star-crossed precisely because they are a Montague and a Capulet.

Perhaps Juliet should have chosen wiser. But who would pay to see Kevin and Juliet?

Names do matter. Or even, as the Romans darkly intuited, nomen est omen — the name is a forewarning. Take the case of Aloïs Schicklgruber, the minor Austrian official who 13 years before the birth of his son Adolf changed his last name to Hitler. Would Adolf Schicklgruber have inspired as much fanatic devotion in his followers, and as much terror in his opponents?

Or take King Ralph, the 1991 John Goodman vehicle, built entirely on the premise that someone with that name couldn’t possibly become King of England. When the latest heir to the British throne was born in 2013, he was given the solidly royal name of George — when he takes over the family business, he’ll be the seventh British king of that name. The odds that the name Ralph was on his parents’ shortlist were probably equally long for Kevin.

So what’s wrong with Kevin? In and of itself, nothing. But perhaps the fact that it once was much more popular than it is today has given us ideas of how old (and how middle-of-the-road) a Kevin must be.

“A Girl Named Kevin” would have made a nice companion song to Johnny Cash’s “A Boy Named Sue.” But the parents of all those she-Kevins were etymologically precise rather than parentally inadvised. Kevin is an old Irish name, as in Saint Kevin, the sixth-century saint (although he would have spelled his name Coemgen). It’s Gaelic for “well-born,” an adjective that can equally apply to boys and girls (although the female version would be something like Caoimhe). Its Greek equivalent, by the way, is Eugene. 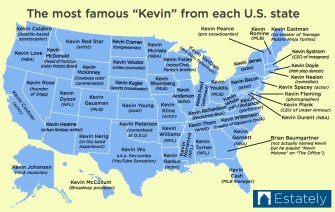 So, parents who name their offspring Kevin are basically congratulating themselves — while saddling the poor kid with a name that has acquired a faint whiff of the ridiculous. But that doesn’t mean Kevins can’t make their way in life, achieve their goals and acquire fame and acclaim. It just makes it a bit more difficult. Yet it can be done!

In fact, it has been done so often that each state has its own Kevin to be particularly proud of. The good people at Estately Real Estate Search have compiled this map, showing the most famous Kevin for each state. All they ask in return is that all the Kevins of America — or at least those shopping for a home — visit their website or download their app. Which sounds like an interesting cross between mass and targeted marketing.

Meanwhile, we are left to marvel at this, the provisional high point in the niche science of kevinography — the cartographic representation of one or more Kevins.

And it’s true: if you put your mind to it, you can achieve anything — even as a Kevin. There are Kevin athletes, Kevin actors, Kevin musicians, Kevin politicians, Kevin CEOs, and even one Kevin poet. As such, this map is a great way to finally recognise and celebrate the contributions of these and many, many other Kevin-Americans.

Many thanks to Rya Nickum for sending in this map, found here on the Estately blog.

Got a strange map? Let me know at strangemaps@gmail.com!

For the first time in nearly 1500 years, fewer than half the people in England and Wales consider themselves Christian.
Up Next
Starts With A Bang

How to soar on Venus

The first human colonies might not be on the surface of Mars, but amidst the clouds of Venus.“I remember as a kid having a balloon and accidentally letting the string […]