This is a mysterious map. Obviously about music, or more precisely musicians. But what’s Eminem doing in Missouri? Kanye West in Georgia? And Wiz Khalifa in, of all places, North Dakota? None of these musicians are from those states! Everyone knows that! Is this map that stupid, or just looking for a fight? Let’s pause a moment and consider our attention spans, shrinking faster than polar ice caps.

This is a map of the best-selling artists in each state, it says. And then to clear up the ambiguity, it adds: FROM not IN each state.

And that checks out, at least concerning the birthplaces of the aforementioned trio:

But hey, isn’t Dave Matthews a native of Johannesburg, South Africa? What’s he doing in Virginia? Because he’s not mentioned as a solo artist, and bands are not born but formed (an important distinction). That seems to be the criterion here: the Dave Matthews Band took shape in Charlottesville, Virginia. The Backstreet Boys – two Floridians, two Kentuckians and a New Yorker – saw the light of day in Orlando, Florida in 1993. 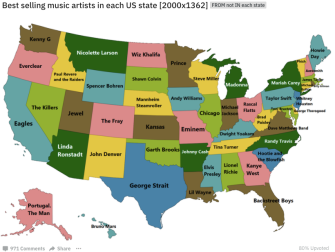 This map popped up last year on r/MapPorn, Reddit’s corner for cartography nerds, where it generated almost a thousand comments. Since we couldn’t find a link to the data used for the map, we did some digging of our own and ended up at the Recording Industry Association of America (RIAA), which keeps track of music sales in the U.S.

The Gold & Platinum section of the RIAA website ranks (1) artists by their all-time sales (but not by the state of birth). Cross-referencing with the map, the ranking (of both albums/EPs and singles sold) produces this Top 10:

The RIAA ranking does not make a distinction per state (either of birth or residence) and indeed also includes non-American artists. The Beatles top the overall list (178 million units sold). Garth and Elvis come second and third. Led Zeppelin, Brits as well, occupy #4 (with 111.5 million units sold). In fifth overall place are the Eagles, #3 in the ranking that conforms to this map.

Things quickly go wrong. Brooklyn-born Billy Joel, #6 in RIAA’s overall ranking (with 82.5 million), does not get to splash his name across his native state. That honor goes to Mariah Carey (scoring 64.5 million units). Similarly, it’s not Bruce Springsteen (65.5 million) but Whitney Houston (58.5 million) who ‘owns’ New Jersey on this map.

What gives? Are we counting the wrong things? Instead of checking the total for Albums/EPs and Singles, let’s try just Albums/EPs. And yes, now Whitney resoundingly beats Bruce, 17.5 versus 3.5 million. And Mariah outsells Billy.

But solving one problem just causes others. Album-wise, the Eagles’ 2.5 million total sales pale into insignificance versus Katy Perry’s 98 million – yet it’s not her name splashed across California. But wait… despite scoring 98 million in the Album/EP category alone, Katy Perry seems to disappear in the combined Album/EP and Single ranking.

We’d love to get to the bottom of this. But now our head hurts, and we need to lie down. Can anybody point us to a valid source that makes sense of this map? Please help us out via the email below.

Despite Roasting Flares From Its Sun, Proxima b Might Still Have Life

Just because humans wouldn’t do well over there doesn’t mean there aren’t incredible chances for life.For nearly 30 years, scientists have been discovering planets beyond our Solar System: the exoplanets of […]