Not content with an economic and diplomatic blockade, the Kingdom of Saudi Arabia (KSA) has revealed a project for a canal that would physically cut off the peninsular Qataris from the Arabian mainland.

To add insult to geopolitical injury, the plan also calls for a Saudi military base and nuclear waste dump—on the Qatari side of the canal.

‘To isolate’ usually means to cut off, to place in quarantine. That’s what the Saudis have been doing to the Qataris since June 2017. Coordinating with the United Arab Emirates (UAE), Bahrain and Egypt, the KSA imposed a diplomatic and economic boycott on the Qataris, accusing the Emirate of interfering in its domestic affairs, supporting terrorism and generally siding with Iran, the Saudi’s arch enemy.

Vehemently denying the claims, Qatar sought and received regional support from Turkey, Oman and—yes—Iran. The Saudis turned up the pressure in December, closing the last remaining border post at Salwa. This effectively cut off land access to Qatar.

Qatar, however, is not buckling under the pressure. An IMF report published last March even indicates that the oil- and gas-rich Emirate is recovering from the worst effects of the Saudi-led blockade. A fact which surely informs the revelation of the canal plan last week by Sabq, a Saudi online newspaper.

Ratcheting up the pressure to 11, the KSA aims to add new meaning to the verb ‘to isolate’ by turning to its root word and literally transform Qatar into an island.

Dubbed the ‘Salwa Canal’, the project is to be funded entirely by private investors from the KSA and UAE and executed by Egyptian firms, building on their experience widening the Suez Canal. 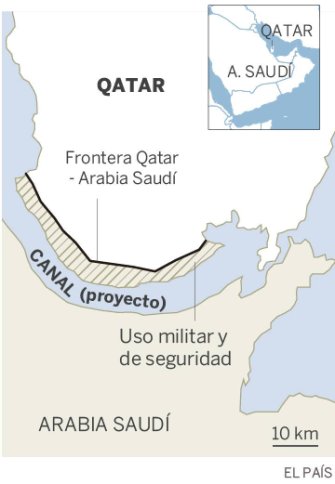 As it is a unilateral project, the canal would run entirely on KSA territory, less than a mile (about 1 km) south of the Saudi-Qatari border. This would leave a strip of Saudi territory on the new island, which the Kingdom aims to use to install a military base, and a dumping site for waste from a nuclear power plant, yet to be built.

Incongruously, the plan also calls for five hotels, two ports and a free trade zone. Tourists and entrepreneurs would probably think twice before heading off to an Arabian version of the hyper-tense DMZ between North and South Korea. As an improvement to shipping, the canal itself does not make much sense either: ships currently follow well-established routes through the main body of the Persian Gulf.

The canal plan may turn out to be no more than another salvo in the war of nerves between the Saudis and Qataris. If not, please send us a glow-in-the-dark postcard next time you’re relaxing in the Salwa Canal Zone.

God, guns, sex, and mutually exclusive concepts of liberty. The Way Brothers’ Netflix docuseries Wild, Wild Country tells a story that’s about as American as it gets.