It is an as yet unnamed variety of Godwin’s Law that applies uniquely to Belgium: given enough time, any subject of public discourse in the obsessively bilingual country will descend into an argument between the French-speaking Walloons and the Dutch-speaking Flemings.

Previous bones of contention between both communities include: the flightpaths into Brussels Airport, the colour of traffic infrastructure, and the place of residence of two pandas on loan from China.

A few years back, it was geography textbooks. Flemish schools used one that included a map that seemed to denigrate Wallonia, and French-speaking Belgians were duly annoyed. The map of the southern half of Belgium was labelled with a few unorthodox designations: Walabama, Walbania and Walifornia.

These are portmanteau toponyms: placenames formed from bits of two other placenames. The new word aims to convey an impression of the area it denotes by grafting a second placename onto the first half of ‘Wallonia’. 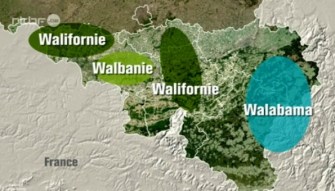 The use of these geographic portmanteaus is not limited to Belgium. Nor is the controversy that they generate. Some are fairly innocuous, like Bollywood – merging Bombay and Hollywood to describe the thriving Indian movie industry. But others veer from exaggeration straight past caricature into racial stereotype.

Take the self-declared “people’s republics”of Lugansk and Donetsk in eastern Ukraine. What better way to give a sense of the lawlessness and violence in those areas but to compare them to African countries? Hence the portmanteaus invented by their detractors: Luganda and Donbabwe.

One imagines the inhabitants of Uganda and Zimbabwe might be displeased with that comparison, arguing that it does them the greater injustice. Similarly, the Albanians and the Alabamans can claim to feel more insulted than the Walloons: it is their good name that is being used as a byword for poverty and backwardness.

Wallonia itself, meanwhile, remains very much a blank slate of a name, thoroughly non-resonant with meaning, unlike the names of other European regions, such as Burgundy, Silesia or Andalusia. That is because its application to the French-speaking south of Belgium only dates from the middle of the 19th century.

The term Walloon is much older, and the Walloons have left a few traces on the map of America – although not in Alabama or California.

In New York, co-founded by Walloons, Gowanus Bay, west of Brooklyn, refers to the Walloon village of Ohain (Owanus in Latin) and Wallabout Bay, north of Brooklyn, is a garbled rendition of the Dutch for Walloon Bay.

Walloon Lake, in northern Michigan, is where Ernest Hemingway spent the summers of his youth. The lake was named after a disappeared settlement of Walloons.

Update 5 April – New Yorks Wall Street has two possible etymologies. The most-cited one is that it is named after the defensive wall put up by the Dutch to fend off Indian incursions. But, as reader Igor Versteeg points out, the other one is that it was originally named Walen Straat – Walloon Street.

This map found here at Bruzz.be.