Throughout the 19th century, cartography was often used to promote sobriety. Here’s a counter-example: a map that celebrates alcohol, in various guises – published two years before the end of Prohibition.

The Temperance movement, which from the early 1800s sought to reduce the consumption of alcohol in the U.S., had a curious affinity for cartography. It produced numerous ‘Temperance maps’, so called because they used fictional topographies to warn against the wickedness of drinking and promote the benefits of sobriety.

Why maps? Perhaps because they were the perfect allegory for a country in full territorial expansion. Going (and staying) teetotal was a long and hard journey, requiring the negotiation of much treacherous terrain (beware Cape Despair, Paupers Bay, Wine Island). But ultimately the destination, a soda-pop version of the Promised Land, made the whole trek worth it, with places like the Gulf of Reform, Repentance Kingdom, Contentment Province.

A gruesome example of a trip in the other direction was presented by the Black Valley Railroad. The illustration shows a train pulled by an engine labelled ‘Distillery’, with stops at Drunkards Curve, Beggarstown, Gamblersville, Robbers Den, Prisonton, Demonland, Maniacville and finally, Destruction.

This blog has featured one or two Temperance maps before (see #285, for instance), but not the one shown in a recent article on Vinepair. The classic 1838 Temperance map by Rev. John Christian Wiltberger, Jr. was not what drew our attention, though.

The article also featured an example of an as yet unknown counter-category – an anti-Temperance map, so to speak. Following the template of its opposite, this Map Showing the Isle of Pleasure uses geographic tropes and terms – and plenty of punning and double-entendre – to extol the delights of drink. 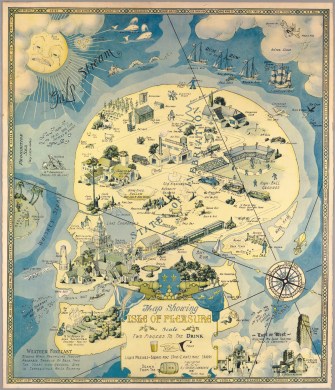 The skull-shaped island (3) is named the State of Inebriation, surrounded by bodies of water named Whiskey Strait, Gulp Stream and Rum Row. Off the island are a sand bar (with bar flies), several whis-keys, etc. The island itself is dotted with all kinds of objects you’d expect on a genuine map: buildings, roads, lakes, mountains – each of which refers to some aspect of drinking.

The map’s date is interesting: it was created by Houston architect H.J. (‘Heinie’) Lawrence in 1931, two years before the end of Prohibition. During that time (1920-33), the production, import, transportation and sale of alcoholic beverages was banned throughout the entire country. In a way, Prohibition was the end result of Temperance. 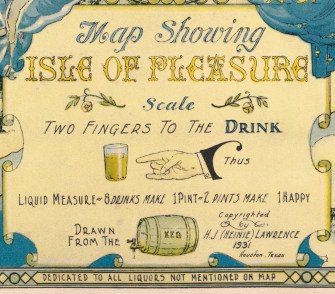 Prohibition significantly reduced but did not eliminate drinking (1). It also created a huge business opportunity for the mafia and other criminal organisations, which led to a significant increase in levels of crime (2). Eventually, the social cost of Prohibition was felt to outweigh the benefits. Even back in 1931, the imminent collapse of the ban on booze was widely expected (or at least hoped for).

That’s why the 18th Amendment (which instituted the alcohol ban) is shown as sinking into oblivion, with Volstead (the Congressman who enacted the Amendment) clinging to one of its masts. 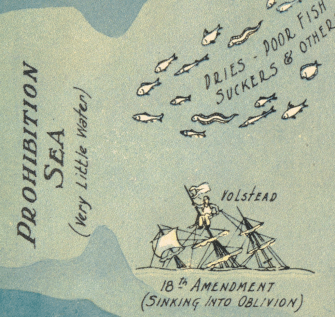 Below are most of the cocktails, brands, slang terms and drinking songs mentioned on the map. The other ones are either too obvious or unfindable. Mix yourself a Prohibition-era drink while you study the map and let me know if you find any of the latter terms.

Blend all ingredients until smooth. Pour into martini glasses garnished with a slice of orange.

Shake and serve in a cocktail glass. 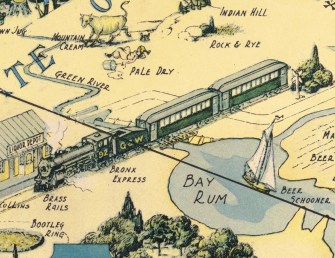 Add a peppermint cherry in each glass.

Shake the ingredients strenuously with cracked ice, then strain into a chilled glass.

Stir well and strain into a cocktail glass. Garnish with mint tip. 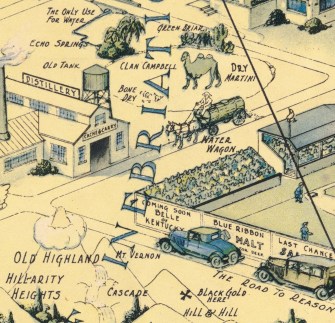 Fill a mixing glass with ice cubes. Add all ingredients. Stir and strain into a chilled cocktail glass.

Fill a glass halfway with ice. Pour all three ingredients into the glass and stir with the ice. Strain into a chilled cocktail glass.

Stir well in ice and squeeze lemon peel on top. 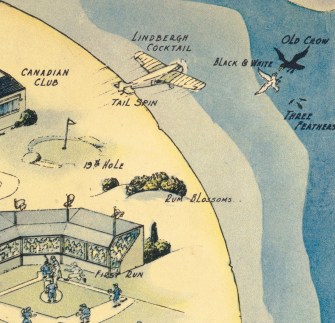 Combine all ingredients in a shaker with ice, shake well, and strain into a cocktail glass.

Served up and garnished with cucumber.

Shake ingredients very well with ice and strain into cocktail glass. Garnish with a cherry.

Pour all ingredients except the bitters into a shaker filled with ice and shake well. Pour into a large, ice-filled glass. Add the bitters on top. Garnish with cocktail cherry and pineapple. 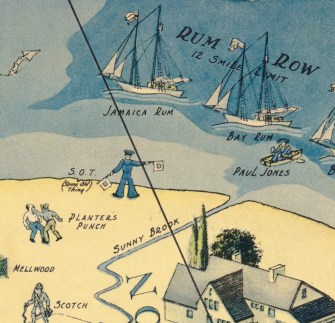 Put some ice cubes in a parfait glass, pour in the Amaretto, Kahlua and milk, and stir. Top with whipped cream.

In a cocktail shaker, muddle the ginger with the simple syrup. Add the rum and cider; fill the shaker with ice and shake well. Strain into an ice-filled rocks glass and top with the ginger beer. Garnish with the lime wedge and apple slice.

Fill a mixing glass halfway with ice. Add the gin, vermouth, green Chartreuse and Campari. Stir well, then strain into a chilled glass. Twist the lemon peel over the drink to release its essence, then drop it in, along with the cherry.

Separate eggs, beat egg whites until stiff. Mix egg yolks with powdered sugar, put a spoonful of yolk mixture in cup, mix with brandy and rum. Fold in some egg white then add hot milk and top with more egg white. Stir gently to fold in the egg white. Top with nutmeg.

Place 5 ounces of room temperature water in a cup. In tea linen, combine all the ingredients for the tea base. Brew in the room temperature water for 10 minutes, agitating from time to time. Remove the sachet/ball.
In a shaker, combine 3 1/2 ounces of the tea base, vodka, and agave nectar. Dry shake until the agave dissolves. Pour into a glass over ice and gently swirl to chill. Top with ginger beer and gently swirl again. Garnish with a fresh ginger slice. 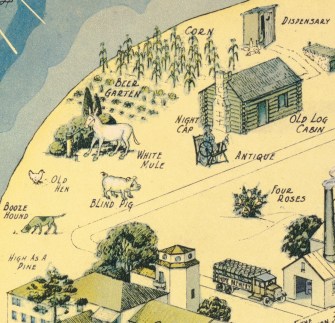 Black & White
Blended Scotch whisky, originally known as House of Commons but renamed after the colours of its label. James Bond drinks it in Moonraker novel, and in the Dr. No film.

Echo Spring
Another Kentucky straight bourbon, created by the Murphy-Barber distillery in Clermont, opened in 1881.

Green River
Distilled in Owensborough, Kentucky from as early as 1889. Marketed as the ‘whiskey without the headache’. Production closed down in 1987. 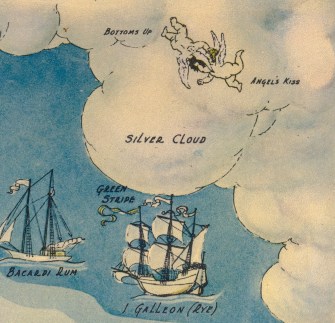 Okolehau
Originally a Hawaiian fermented beverage, transformed into a high alcoholic spirit after the introduction of distillation techniques by English seamen in the 1790s.

Old Crow
A Kentucky straight bourbon first distilled in the 1830s in Frankfort by Scottish immigrant James C. Crow, Old Crow enjoyed huge popularity in the 19th and early 20th century. It was said to be the favourite drink of Ulysses S. Grant, Mark Twain and Hunter S. Thompson. Today it is a modestly-priced sister brand of Jim Beam.

Old Forester
A Kentucky straight bourbon that has the distinction of both being the oldest brand on the market and the first one to introduce sealed bottles (both °1870s). During Prohibition, it was one of 10 brands authorised for continued production – for medicinal purposes.

The 19th Hole
Often used to describe a bar or restaurant near a golf course (which traditionally has only 18 holes).

Blind Pig
A lower-class establishment that circumvented alcohol laws by charging customers to see an attraction (e.g. a ‘blind pig’) and then offering a complimentary drink.

Bung
A large stopper for a cask. 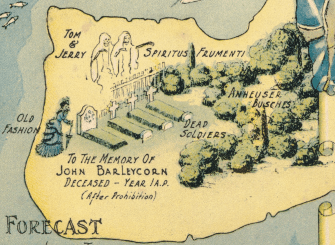 Mountain dew
A term for high-proof spirits distilled without proper permission, often in wooded and/or mountainous regions, far from the grasp of the authorities. Officially referred to as ‘clear, unaged whisky’, it is also known as white lightning, hooch, moonshine and choop, among other nicknames.

Father, Dear Father
“Oh Father, dear Father, come home with me now / My Mother has sent me to say / That she and her children are starving at home / While you’re drinking your wages away”.

Little Brown Jug
“My wife and I live all alone / In a little log hut, we called our own / She loved gin, and I loved rum / I tell you what we’d lots of fun”. Originally written in 1869, it regained popularity during Prohibition. Became one of the best-known songs of the Big Band era after Glenn Miller recorded it in 1939. The melody was later used for My Ding-a-Ling, a #1 hit for Chuck Berry in 1972. 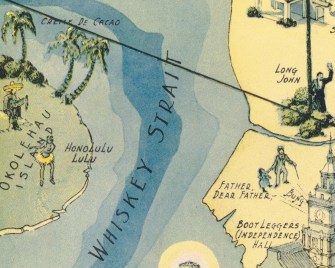 (3) Perhaps a reference to the classic depiction of Utopia, also portrayed as a skull (see #51).

(4) Ojen (a.k.a. ‘Old Hen’) was an anise-flavoured aguardiente from the eponymous village in Malaga, Spain. Creates a milky-looking liquid when mixed with water. In the early to mid 20th century, an Ojen-based was popular in New Orleans, especially during Mardi Gras. The original distillery has since ceased production.

(5) traditional U.S. Christmastime cocktail, devised by British journalist Pierce Egan in the 1820s to promote his book (Life in London, or The Day and Night Scenes of Jerry Hawthorn Esq. and his Elegant Friend Corinthian Tom) and play (Tom and Jerry, or Life in London). It’s possible the cartoon cat and mouse derive their names from the drink.

Why Science Demands We Keep The Iran Nuclear Deal

In 2015, the United States brokered a revolutionary international deal with Iran about their nuclear programme. Here’s the science behind it.In 2015, a historic agreement was reached between Iran and the […]