The natural world is losing up to 2,000 species a year, and that’s a low estimate. Fortunately, one corner of the animal kingdom is immune from extinction: the monsters that thrive in our imagination. This map unites America’s most famous cryptids on one map, from Caddy, a Northwestern sea serpent, over Nebraska’s Alkali Lake monster to the skunk apes of Southern Florida.

There’s a whole discipline dedicated to the study of beasts unknown to science: cryptozoology, literally ‘the study of hidden animals’. Although frowned upon by mainstream science, some of these ‘hidden animals’ have actually been proven to exist. The giraffe-like okapi of Central Africa was confirmed only in 1901. Indonesia’s komodo dragon seemed too fantastical to be true until 1912, when its existence finally could be documented. These two species share the questionable distinction of having their existence threatened (by us) so soon after being discovered (by us).

Until science discovers evidence for the Loch Ness monster, the Himalayan yeti or any of their fellow cryptids (i.e. ‘hidden creatures’), these monsters will have the good fortune to be as uncountable as they are unaccounted for, free to roam and multiply in our campfire stories and our folklore. The United States has quite a few of these cryptids, some famous, like the Mothman or the Chupacabra, some perhaps only known (and feared) locally, like the Beast of Busco or the Pope Lick Monster. 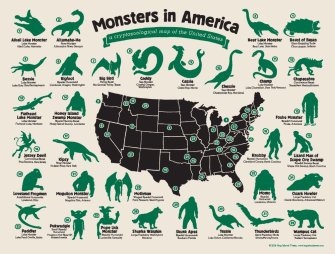 As shown on the map, which brings them together for the first time, most cryptids are concentrated in the eastern third of the US. Perhaps not surprising: that’s where most people live, thus presumable also an agreeable environment for monsters (as notable for their attention-seeking as for their camera-shyness). Further west, monsterdom is spread more thinly, with just 15 out of 32 cryptids mentioned on the map occurring in the two thirds of the land mass west of the Mississippi. So, which are America’s favourite monsters?

A 30-foot creature navigating the mount of Georgia’s Altamaha River with seal-like movements, blending in to its surroundings thanks to its green skin. A.k.a.: Altie. Possible footage of the monster here.

Although the person who first reported the Monster of Bear Lake, on the Utah-Idaho border, later admitted it was a “wonderful, first-class lie”, his tall tale has continued to generate numerous sightings, turning the 30-foot ‘water devil’ into a modest tourist attraction. More at American Folklore.

In 1949, inhabitants of Churubusco, Indiana reported seeing a giant snapping turtle which, despite a month-long turtle-hunt, managed to evade its pursuers. The town now boasts a statue of ‘Oscar the Turtle’, and annual Turtle Days, held in June. More at Unknown Explorers.

Loch Ness has Nessie, Lake Erie has… Bessie. Snake-like and between 30 and 40 feet, Bessie was first sighted as far back as 1793. A.k.a.: South Bay Bessie. Has its own comic book series.

Perhaps North America’s most famous cryptid, this large, hairy apeman is said to inhabit the forests of the Pacific Northwest. Bigfoot (a.k.a.: Sasquatch) has left an aptly large imprint on American popular culture, figuring in countless TV series, movies and even a musical. The famous picture, claimed by some to show a genuine Bigfoot, by others a man in a gorilla suit, can be seen here.

A giant, ape-faced bird that terrorized the Rio Grande Valley. First spotted in 1976, it has blood-red eyes and a 12-feet wingspan. After a few months, the monster disappeared as mysteriously as it had emerged. Could it have been a jabiru, a Central American stork, as claimed by the Brownsville Herald?

Named after Cadboro Bay in British Colombia, Caddie is a sea monster said to frequent the coasts of Washington and Oregon. A.k.a.: Cadborosaurus willsi. More at The Cryptid Zoo.

Maine and Oregon both have a Portland, and also a sea monster. The Pine Tree State’s Casco Bay is home to Cassie. Sea serpents were reported in the area as early as 1751, but have tailed off in the last couple of decades, says Maine Mysteries.

Chesapeake Bay has its own sea monster – unavoidably called Chessie. Reportedly 25 to 40 feet long, it was sighted most often between the mid-1970s and mid-1980s, and as recently as 2014. Ranked #8 scariest sea serpent by Animal Planet.

The champion among American lake monsters, Champ’s habitat is Lake Champlain on the New York/Vermont border. As with many monsters, the numerous contemporary sightings are supported by Native American traditions – in this case, the local Abenaki tribe’s stories about a creature called Tatoskok. Last year, the Daily Mail reported on audio recordings presented as evidence of Champ’s existence.

The original sighting of the Chupacabra (Spanish for ‘goat-sucker’) was in the mid-1990s in Puerto Rico, and apparently influenced by a creature in the sci-fi movie Species. A rash of sightings (and mutilated goats) in northern Mexico and the southern US has been linked to mangy dogs. Yet the legend lives on, reports the Huffington Post.

The Flathead Lake Monster is that Montana Lake’s version of Nessie. Strangely, nobody thought of calling it Flessie. More at NBC Montana.

Seven feet tall, with gray hair, red eyes and a foul smell, the Monster of Honey Island Swamp, Louisiana is a hominid cryptid seen since 1963 (but also linked to older Native American myths).

Winged and hoofed, the Jersey Devil would probably look like a devil, if it could be coaxed out of its lair in New Jersey’s Pine Barrens. More info (and t-shirts) here.

Or the Hudson River Monster. Could also be an unusually large (and very lost) manatee. See also Cryptid Wiki.

Humanoid frogs about 4 feet tall, first sighted in Loveland, Ohio, and from 2014 stars of their own musical, named Hot Damn! It’s the Loveland Frog! More at Who Forted?

A Bigfoot-like creature sighted along the Mogollon Rim in central and eastern Arizona. No attested sightings confirm its existence, but the monster does have its own website.

‘Couples See Man-Sized Bird…Creature…Something’, titled the Point Pleasant Register on 16 November 1966. The sightings continued for just over a year, popularized by the book The Mothman Prophecies (1975), turned into a 2002 movie starring Richard Gere.

Is Paddler a real monster in Lake Pend Oreille, Idaho, or is it just a cover story for secret Navy submarine tests? More on Cryptomundo.

A three-foot humanoid from Wampanoag (Massachusetts) folklore, with enlarged noses, fingers and ears, able to appear and disappear at will, transform into a porcupine, and lure humans to their deaths. Hence best left alone.

The Pope Lick Monster is part man, part bovine, lives under a railway bridge near Louisville, Kentucky, and kills people either by luring them onto the tracks, or jumping down on motorists beneath the bridge. Quite disappointingly, no actual popes were licked in the making of this urban legend. More at the Louisville Ghost Hunters Society.

An Ioway term meaning ‘carries off dogs’, the Shunka Warakin is said to resemble either a hyena or a wolf, or both. One such animal was shot and mounted in 1880s Montana, was displayed in a local store until it mysteriously vanished in the 1980s. ‘Ringdocus’, as the animal was named, was found again in 2007, according to the Bozeman Daily Chronicle.

A.k.a. Florida Bigfoot, the skunk ape, according to the US National Park Service, does not exist. However, some mysterious photos sent in by an anonymous source, seem to indicate otherwise.

Another Nessie spin-off, Tessie swims in Lake Tahoe, on the California-Nevada border. After a few dives in the mid-1970s, famed French oceanographer Jacques Cousteau reportedly said: “The world isn’t ready for what is down there”.

Large bird-like creatures with enormous wingspans, associated with Native American myths, but sighted (and shot) in modern times; as in one famous (but apocryphical) case in the early 1980s. A picture of a dead thunderbird nailed to a barn in Arizona is one of the many cryptid clues that have ‘mysteriously’ gone missing. Or is this it?

A cougar-like cat stalking eastern Tennessee, not unlike the Eewah, a half-woman, half-cougar, from Cherokee mythology. Legend has it that when you hear the Wampus cry, someone will die within the next three days. The Wampus Cat also steals children, and smells awful. More here.

Yesterday Facebook updated the News Feed to attempt to prevent the spread of hoax news stories. What will the fallout look like?