Who made electric cars sexy and wants to die on Mars? It’s the easiest of pub quiz questions: Elon Musk, is who. But the man famous for building Teslas and recycling rockets is a man of many more interests, and trades – as shown by this graph, a map of where he’s put his money over the years. Welcome to Muskworld.

With a fortune in excess of $20 billion and as a pioneer in various fields, Musk is consistently ranked as one of the world’s richest and most influential people. Both the money and the influence are self-made.

Born in South Africa in 1971, Musk moved to North America in 1988. He studied in Canada and the U.S., eventually acquiring U.S. citizenship in 2002. By that time, he had already founded his first companies and become a multimillionaire.

As the map shows, SpaceX and Tesla – in that order – are his main investments. But Musk is about more than aerospace and (electric) transport ; as the map legend indicates, his interests include artificial intelligence (AI), e-commerce, software, energy and medical/biotech. For more on each company, see the timeline below the map. 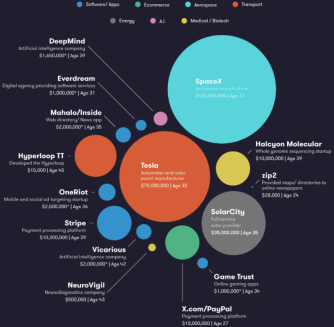 Although this map gives an interesting insight into Muskworld, it is by no means complete. It doesn’t list smaller investments, such as Musk’s stake in Surrey Satellite Technology, nor later ones, such as in brain-computer interface producer Neuralink in 2016, nor his financial investment in (admittedly non-profit) organisations such as the Tesla Science Center, the Future of Life Institute, the X Prize Foundation, OpenAI, and his own Musk Foundation.

Do Earth-Sized Planets Around Other Stars Have Atmospheres? James Webb Will Find Out!

Even if it can’t detect them directly, we’ll learn the answer. Here’s how.Perhaps the most revolutionary find of the past generation, when we think about the Universe beyond Earth, is the […]