What does Jonathan Swift have to do with how we write our dates and addresses? Nothing—at least not until 1980. It was then that Gulliver’s Travels inspired the term ‘endianness’ and its derivatives, which neatly describe the different formats in which we write both.

This was first proposed almost 40 years ago in a whimsical treatise on the subject (1) by Danny Cohen. He was inspired by a passage in Gulliver’s Travels in which Swift satirises the often trivial causes of religious wars in Europe—in this case, a dispute on whether to crack a boiled egg by its big end or its little end (2).

Endianness has two common applications outside the world of computer programming: dates and addresses. Here, too, sequencing conflicts exist, most notably between the United States and Europe—although, as these maps show, the situation in Europe is not as uniform as in the U.S. 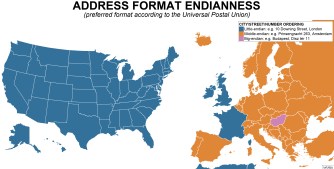 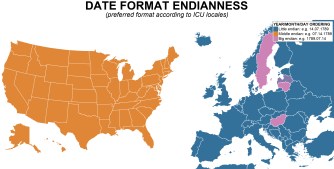 The dominance of a particular format can often be related to linguistic preference. For example, Hungary’s general-to-specific exceptionalism may have something to do with the fact that this is also how one presents oneself in Hungarian: family names first, given names second.

For most non-Hungarians, Big-Endiannes sounds wrong; but it is easier to sort data sequences when they’re arranged with the most general value first, which is why the YYYY-MM-DD format is increasingly being used for data entry.

(1) On Holy Wars and a Plea for Peace. Beware that your definition of whimsy may be at variance with that of the byte-ordering community.

“It is allowed on all hands, that the primitive way of breaking eggs, before we eat them, was upon the larger end; but his present majesty’s grandfather, while he was a boy, going to eat an egg, and breaking it according to the ancient practice, happened to cut one of his fingers”.

“Whereupon the emperor his father published an edict, commanding all his subjects, upon great penalties, to break the smaller end of their eggs. The people so highly resented this law, that our histories tell us, there have been six rebellions raised on that account; wherein one emperor lost his life, and another his crown”.

“These civil commotions were constantly fomented by the monarchs of Blefuscu; and when they were quelled, the exiles always fled for refuge to that empire. It is computed that eleven thousand persons have at several times suffered death, rather than submit to break their eggs at the smaller end”.

“Many hundred large volumes have been published upon this controversy: but the books of the Big-Endians have been long forbidden, and the whole party rendered incapable by law of holding employments”.

Why emotional intelligence is a key pillar of diversity and inclusion

Emotional intelligence can have massive benefits for any organization, but why? How do we maximize our groups’ EQ?