London is an unlikely destination for hill-climbing. The local topography is mostly flat, with some soft undulations. The city’s tallest building – the Shard, at 306 m (1,000 ft) or 310 m (1,020 ft) if you include the tip – easily beats the highest natural point, Westerham Heights in the south-eastern borough of Bromley (245 m, 804 ft).

But if you’re in London anyway and you’ve seen all of the usual sights, why not seek out the highest points in each of its 32 boroughs? Yes, many are ridiculously low and obscure. Nevertheless, ‘hill bagging’ is a thing even in London, as an alternative and mildly ironic (and thus perhaps very British) form of urban exploration. Alternatively, there’s the London Peaks Relay, a 240-km (150-mile) race in which a team of runners visit the highest point in every London borough within 24 hours.

Here’s an overview of the 32 tumps (1) you have to ‘climb’ before you can consider yourself the conqueror of London’s Borough Tops. While none is a challenge individually, together they add up to 2,996 m (9,829 ft) – more than twice the height of Britain’s highest mountain, the redoubtable Ben Nevis, at 1,344 m (4,409 ft).

Westerham Heights is a separately named part of Betsom’s Hill, which peaks just across the county border in Kent. It’s both the highest point of the North Downs and of Kent. Its ranking as the 2,141st-highest peak in England (and the 13,201st-highest in the British Isles) derives from the Database of British and Irish Hills (DoBIH), as quoted by The Mountain Guide, from which the other rankings – where available – were also taken. The quotes are from climbers who have bagged the ‘hills’ in question, taken from the Hill Bagging website.

Also mentioned as Hampstead Heath. The high point is at or near where these two meet. 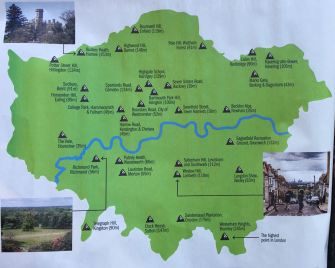 (near Highgate Hill, also mentioned as the borough high point, with the same altitude)

Also mentioned as St John’s Wood Park Road. The high point is at or near the junction of these two roads.

London has 32 boroughs, but the map (and this list) has only 31 tops. That’s because Sydenham Hill, on the border between Southwark and Lewisham, is the highest point in both boroughs. Not mentioned on the map is the highest point in the City of London, which is a separate and independent entity, not part of Greater London as such.

(1) In England, a hillock, mound, barrow or tumulus. May be related to the Welsh twmp.

From politics to culture, we blame “tribalism” for humanity’s problems. This explanation is entirely wrong.
Up Next
Thinking

Not so bad after all

It may seem like the world’s going to hell in a hand basket, but the facts don’t support it.