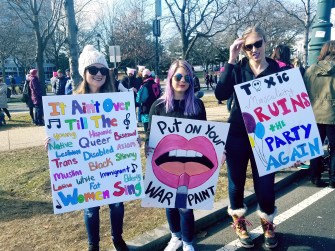 The worst countries in the world to be a woman? Places torn apart by war, or societies stifled by centuries of male patriarchy, a recent survey by the Thomson Reuters Foundation shows. So which category does the United States fall into? Because the US made 10th place – the only western country on the list.

Conducted online, by phone and in person between March 26th and May 4th, the survey polled 548 experts on women’s issues spread evenly across Europe, the Americas, Asia and the Pacific. Those surveyed included academics and policymakers, healthcare staff and ngo workers, aid and development professionals and social commentators.
They were asked which five of the UN’s 193 member states they thought were the most dangerous for women in six areas:

Adding up all the answers produced a list topped by India – in no other country are women more at risk of sexual assault or slave labour, it seems. 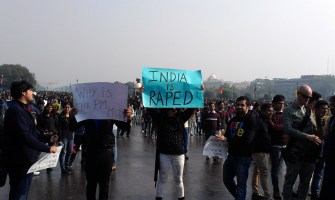 Protests in Delhi in December 2012.

India’s rise to the top of shame may be the result of increased awareness around women’s safety, following a highly publicised rape case in 2012. A 23-year-old woman travelling in a private bus in Delhi was raped by all other male passengers (and the driver), tortured and eventually died from her injuries.

That could explain why Indian government data shows reported cases of crimes against women rose by 83% between 2007 and 2016. An average of one rape every fifteen minutes was reported in India in that year.

But greater awareness has not yet been very effective in reversing deeply-ingrained traditions, attitudes and practices – including female infanticide, forced marriages, sex slavery, domestic servitude, human trafficking and death by stoning. 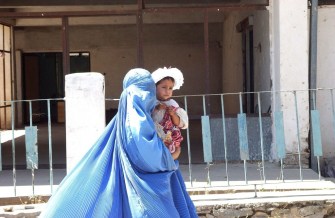 Good news in the smallest of doses

Numbers two and three on the list are Afghanistan and Syria, countries where the social fabric has been well and truly torn by seemingly interminable civil wars.

Good news for Afghanistan, albeit in a homeopathically small dose: it dropped to second place from first, which it occupied in a similar survey conducted in 2011. But the country still fared worst in four of the questions asked, especially regarding healthcare and conflict-related violence.

Almost two decades after America’s intervention in Afghanistan, the Taliban continues to gain ground and the situation for women and girls is worsening – especially when it comes to literacy (i.e. education), poverty and gender-based violence.

Syria’s seven-year civil war is restricting access to healthcare (resulting in higher deaths during childbirth), fanning violence (both sexual and non-sexual) and increasing the incidence of child marriages. As a result, the country finds itself in third place on the list. 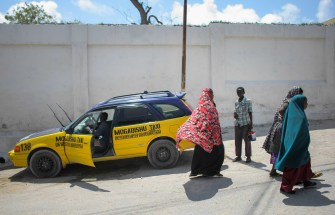 Numbers four and five are Somalia and Saudi Arabia, two countries in the grip of fundamentalist interpretations of Islam.

Somalia’s decades of civil war have produced a culture of violence and weakened laws and institutions that could have protected women against its worst excesses.

Slight progress in Saudi Arabia – women are now allowed to drive – was nullified by the arbitrary nature of its male-chauvinism-powered regime – women campaigning against the ban on female drivers were arrested even as that ban was being lifted. Meanwhile, every Saudi woman is still subject to male guardianship: if not her father or her husband, then her brother or even her son. 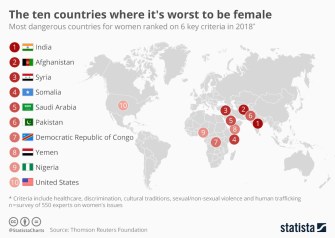 The club of shame.

Numbers six to nine on the list are Pakistan, DR Congo, Yemen, Nigeria – countries afflicted in various degrees by conflict, poverty and patriarchy. Singling out human trafficking – a criminal practice turning over $150 billion a year globally – the top three would be India, Libya and Myanmar.

The only geographic outlier, and the only western/developed country on the list, is the United States of America. It ‘earned’ its 10th place due to its ranking in third place when the respondents were asked where women were most at risk of sexual violence, harassment and being coerced into sex.

The U.S. did not figure in the Top 10 for the previous survey in 2011. Its ‘surprise’ addition this time, experts say, is because of the #MeToo movement and #TimesUp campaign, highlighting issues of sexual violence and harassment – both in the high-profile cases that started the ball rolling, and the many others that came to light since.

More on the Thomson Reuters Foundation here. Here is its statement on the survey cited above.

Nikolaas Tinbergen’s concept of “supernormal stimulus” explains why humans are attracted to a heightened version of reality.
The Learning Curve

To reap the benefits of digital technologies, we must contend with their addictive designs.
Up Next
Life

Capuchin monkeys have refined their tool use over 3,000 years

Not only do these monkeys use tools, they’re developing new, better tools to adapt to their environment.