The star, named RW Aur A and located in the Taurus-Auriga constellation, is a few million years old; it’s been watched and studied by astronomers since before World War II—1937, in fact.

The light from this star has dimmed periodically over the last 80 years for as long as a month, according to NASA.

The phenomenon has became much more frequent since 2011, causing scientists to pay even more attention to the star; the Chandra X-ray Observatory and telescope, highly sensitive to x-rays, began to be focused much more on it since then in an effort to collect enough data to figure out what was happening.

And that’s when the light bulb came on. Specifically, the detection of a high quantity of iron around the star; this was a new phenomenon, when compared with the same star in 2013, and the best possible solution is that a planet—perhaps more than one—collided with the star and was swallowed up by it. The dust, rocks, particles, and gas remaining would explain the dimming effect. 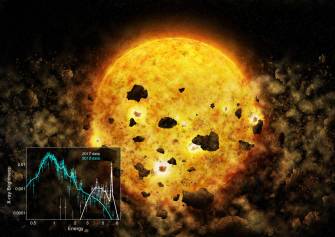 This artist’s illustration depicts the destruction of a young planet or planets, which scientists may have witnessed for the first time using data from NASA’s Chandra X-ray Observatory. Credits: Illustration: NASA/CXC/M. Weiss; X-ray spectrum: NASA/CXC/MIT/H. M.Günther

“Computer simulations have long predicted that planets can fall into a young star, but we have never before observed that. If our interpretation of the data is correct, this would be the first time that we directly observe a young star devouring a planet or planets,” said Hans Moritz Guenther, research scientist at MIT’s Kavli Institute for Astrophysics and Space Research. Guenther headed up the study.

There’s a second theory that is also plausible, though less favored: The star’s sister, RW Aur B, may in fact pass close enough to RW Aur A that the latter actually rips particles of iron from the disk that surrounds the former. As NASA explained:

“RW Aur A is located in the Taurus-Auriga Dark Clouds, which host stellar nurseries containing thousands of infant stars. Very young stars, unlike our relatively mature sun, are still surrounded by a rotating disk of gas and clumps of material ranging in size from small dust grains to pebbles, and possibly fledgling planets. These disks last for about 5 million to 10 million years.”

This second theory holds that within those clumps of material are iron particles, and they are jarred loose by the gravitational forces of RW Aur B passing by.

It’s not settled yet; future efforts will continue building data from Chandra, as well as compare data from the multiple decades that the star has been studied to see if there are clues about planet-eating, collisions, or perhaps something else entirely.

And if the thought of a planet-eater made you think of Star Trek: The Doomsday Machine, well, you’re in good company.

Samsung is planning to unveil a new type of bendable, foldable smartphone that could sell for more than $1,500, according to the Wall Street Journal.