Samsung is planning to unveil a new type of bendable, foldable smartphone that could sell for more than $1,500, according to the Wall Street Journal.

Sources close to Samsung told the newspaper that the prototype, currently dubbed ‘Winner’, has a 7-inch screen (measured diagonally) that can be folded in half, like a wallet. When folded, you’d see a small display bar on one side and cameras on the other, sources said. 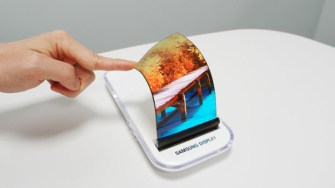 Samsung’a 5.7-inch bendable AMOLED is just 0.3mm thick, weighs 5 gram and can be rolled up into 10mm cylinder. (Image via Hothardware)

The screens for the new smartphone are expected to be ready by November 2018, according to a Tech Radar report on Samsung’s history of trying to develop foldable phone technology.

“… Samsung has created a curved battery for the phone with a capacity of between 3,000mAh and 6,000mAh, while the phone itself could land in February 2019, possibly during MWC,” the report reads. “That’s a rumor that we’ve now heard more than once, though as with everything Galaxy X-related we’d take it with a huge helping of salt.”

In 2013, Samsung unveiled prototypes of its flexible OLED displays. One year later, the company implemented similar technology in its Galaxy Round, a curved-screen smartphone that was the world’s first to feature a flexible AMOLED display. Nearly ever year since, reports emerged that Samsung was close to releasing a foldable smartphone, though no product ever materialized. 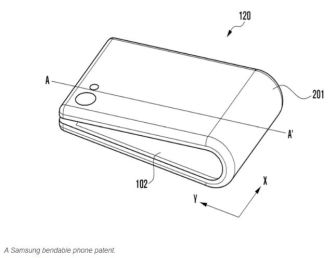 In 2017, smartphone sales declined for the first time in the industry’s history, and some estimates predict a similar slump for 2018. The creation of a new smartphone category could change that. Instead of the marginal improvements to software or screen size, the introduction of a bendable smartphone would give consumers a visible and touchable reason to upgrade.

However, the foldable phone’s (potential) $1,500 price tag could be a problem for consumers. It’s worth noting that, despite reports indicating Apple was disappointed with the sales performance of its latest smartphone, Apple’s iPhone X, which cost $1,000, was the company’s best-selling device for the first three months of 2018, according to Apple CEO Tim Cook.

Meanwhile, Samsung smartphone sales are under pressure. The company reported lower-than-expected sales for the second quarter of 2018, and its latest smartphone, the Galaxy S9, is projected to sell less units in its debut year than its predecessor did in 2017, according to Reuters.

“Functions (that) Samsung’s mobile phones have are not attractive enough for customers to spend more money on,” Song Myung-sup, analyst at HI Investment & Securities, told Reuters.

Samsung seems to be betting its new flexible technology will change that.