Each time one of our cells divides, there’s a good chance of a mutation occurring. Because the human genome is a dauntingly complex three billion letters long, and we’re made up of 37.2 trillion cells, scientists estimate we produce trillions of mutations every day. While most of these are benign, some aren’t, and cancer is one life-threatening result.

It makes sense that the more cells an organism has, the greater the likelihood cancer-causing mutations will arise — except that it doesn’t seem to be so. Gigantic elephants, for example, rarely get cancer — less than 5% of them as opposed to 11-25% of humans. The non-correlation between body size and cancer is called “Peto’s paradox,” and scientists want to understand it. After all, “Animals with 1,000 times more cells than humans do not exhibit an increased cancer risk, suggesting that natural mechanisms can suppress cancer 1,000 times more effectively than is done in human cells.”

A new study may have learned the pachyderm’s secret: It’s an unusual, re-born gene they possess. A zombie gene, if you will. 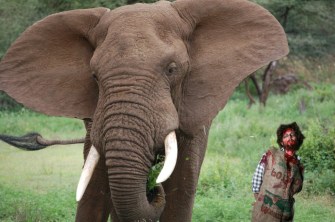 In 2015, a University of Chicago study led by geneticist Vincent Lynch discovered that elephants have an unusually large supply of tumor suppressor TP53 genes. We have one of these; elephants have 20. (Most mammals have two.) A second study done at the University of Utah found the same thing. The U of C study explains this abundance by saying it occurs “coincident with the evolution of large body sizes, the evolution of extreme sensitivity to genotoxic stress, and a hyperactive TP53 signaling pathway in the elephant (Proboscidean) lineage.”

TP53 can be found in cell nuclei, bound directly to DNA. Should that DNA become damaged, TP53 triggers chemicals that can address the problem, or if the damage is too severe, prevents it from duplicating it and instructs it to enter apoptosis, its death process.

With so many of these sentinel genes, elephants have an unusually vigilant early-warning system for cancer and an exceptionally low tolerance for dangerous cells. Lynch’s team verified this by introducing DNA-damaging carcinogens to tissue samples from elephants, manatees (cousins to elephants), and hyraxes. “The elephant cells just died; they were entirely intolerant of DNA damage in a way their relatives’ cells were not,” Lynch tells CIMEX. “Because the elephant cells died as soon as their DNA was damaged, there was no risk of them ever becoming cancerous.”

Lynch’s team continued to work through the mechanics of the elephants’ defense system. In looking at damaged cells, “We found that elephants and their relatives have many non-functioning copies of the LIF gene,” says Lynch. (The “dead” LIF genes lack a requisite DNA on/off switch.) His team was familiar with LIF since it plays a role in pregnancy, and because one of its proteins aids in tumor suppression. 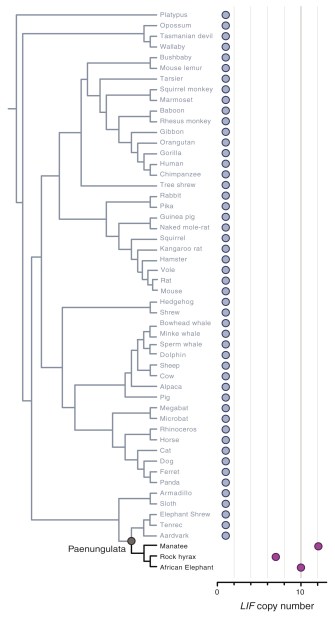 It’s not uncommon for organisms to have lots of dead genes, but “elephants themselves evolved a way to turn one of these copies, LIF6, back on.” Experiments proved the importance of this “upregulation.” When the geneticists exposed to carcinogens some elephant cells from which the zombie gene had been removed, the cells tolerated the damage and eventually became cancerous, just like non-elephant cells. Meanwhile, when they overexpressed LIF6 in other animals, exposed cells immediately self-destructed, just like elephants’ cells normally do.

It appears that TP532 and LIF6 work together as a cancer-sensing and -killing tag team. Says Lynch, “First some stress is introduced, like cancer-inducing DNA damage, that turns on the tumor-suppressor p53. This, in turn, activates the gene LIF6 that can then go to the mitochondria, cause its insides to leak out, and trigger apoptosis, or cell death.” 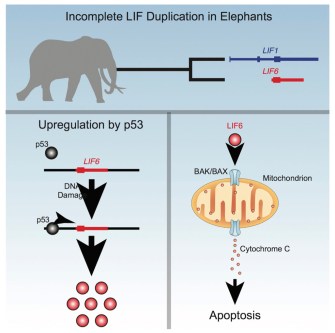 It seems the truth implied by Peto’s paradox is that when many-celled organisms face an increased threat such as cancerous mutations, natural selection may lead them to develop extraordinary defense mechanisms. Elephants certainly have risen to the challenge.

Meaningful pictures are assembled from meaningless noise.
Up Next
Mind & Brain

Is there a cure for pessimism?

Researchers at MIT believe they might have located the neural regions responsible for pessimism.