Earth and Mars will come closer on Tuesday, July 31 than they have in 15 years. Just 35.8 million miles (57.6 million kilometers) will separate the two.

(Fun little trivia item: At this distance, it will take 3 minutes and 18 seconds for radio signals to reach Mars.)

Mars is, on average, about 140 million miles from Earth, but the approach happening this month will be the nearest the planet has been to us since 2003, at a distance of about 35.8 million miles away from Earth, according to NASA. Mars will both be brighter and appear bigger than it has since 2003, when it was 34.6 million miles (55.7 million kilometers) away. That was the closest in 60,000 years, and that kind of range won’t happen again until the year 2287. 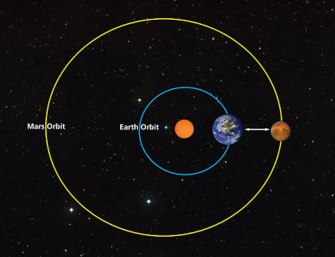 If you’re looking through binoculars or a telescope, you will not be able to see the detail you normally do on the planet’s surface; there’s a massive dust storm obscuring most planetary details right now. The silver (red?!) lining to that, however, is that the dust reflects sunlight, making it even brighter.

Widener University astronomer Harry Augensen couldn’t suppress his excitement. “It’s magnificent. It’s as bright as an airplane landing light. Not quite as bright as Venus, but still because of the reddish, orange-ish-red color, you really can’t miss it in the sky.” 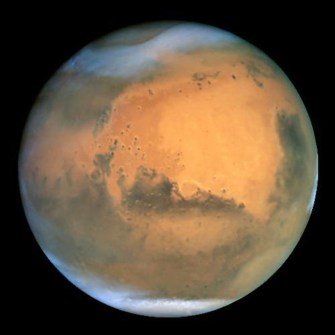 NASA’s Earth-orbiting Hubble Space Telescope took this picture June 26, 2003 of Mars. Mars was approximately 43 million miles (68 million km) from Earth, the closest Mars had been to Earth since 1988.(Photo by NASA/Getty Images)

If you missed the peak at 1:00 a.m. ET today, don’t worry; it will remain pretty close, providing great viewing opportunities until about the end of August. Look for it right after sunset, or about 9:30 p.m. It will keep climbing until about 2 a.m., when it will reach maximum elevation of about 20 degrees, which is roughly two outstretched fists above the southern horizon.

The live link is here—while the broadcast is now over the recording lives on and, of course, it lives on in the sky too—just look up.

Hear Carl Sagan as you’ve never heard him before.