I remember when I was young, a science teacher captivated our class one day with the idea that horseshoe crabs have blue blood, which is indeed harvested for medical purposes. Then we were told that we too sometimes have blue blood, in our veins, when our blood has delivered its supply of oxygen to our organs and tissues. It remains blue, we were told, until passing through the heart and past the lungs, where it acquires oxygen and turns red again. But is it true? After all, our veins do look blue.

Turns out, it’s a complete myth. Although veins do carry deoxygenated blood back to the heart, the blood merely looks a darker shade of red. It doesn’t turn blue at all. Still, the myth persists.

The reason blood is red is, it contains hemoglobin. This iron-rich protein carries oxygen throughout the bloodstream. Anything with a lot of iron gives off a red hue. Consider the red planet—Mars, which has an iron-rich dust covering its surface. And when iron rusts (iron oxide) it turns an orangey-red.

Oxygenated blood is bright red, while deoxygenated blood appears darker. Have you ever donated blood or had it taken for a blood test? You’ll notice they puncture a vein, usually in the arm, and still it comes out red. So why do veins look blue? This has to do with how light is reflected and scattered as it passes through your skin. 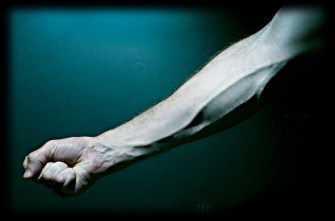 Why veins look blue has to do with the electromagnetic spectrum and how your skin reflects light. Credit: Colin Davis. Veins in my right arm. Flickr.

You might remember from studying the electromagnetic spectrum that blue and red light have different wavelengths. As light passes through your skin, some of it gets absorbed, some of it scattered, and some reflected back to you. Since blue light reflects back better than red, our veins below our skin look blue. If you previously believed the blue blood myth, don’t feel bad. A lot of well-educated people have.

Besides horseshoe crabs and octopi, lobsters and other crustaceans, and squid also have blue blood. That’s because instead of the respiratory protein hemoglobin, their blood uses hemocyanin to carry oxygen. Hemocyanin contains copper instead of iron. If you’ve ever seen a copper penny rust, you’ll notice it turns green. When mixed with oxygen however, it turns blue. There’s another, rarer color of blood in the animal kingdom.

The skink—a type of lizard, has green blood. This is due to the buildup of a substance called biliverdin, which is a byproduct of the processes of the liver. Humans have it too. But our bodies pass it through the intestines and out the digestive tract. Since it doesn’t pass through a skink, it builds up in their blood instead, turning it green.

For more debunked myths about the human body, click here:

Seven thought experiments that will make you question everything

Philosophers love to use thought experiments, here are seven of the most useful for making you reflect on everything around you.