“Parker,” named for Eugene Parker, the solar physicist who predicted solar wind and began referring to it as exactly that, launches Saturday around 3:30 a.m. ET. At its closest, it will be 4 million miles (6 million kilometers) from the surface of our sun. This actually means it will go through the “atmosphere” or corona. 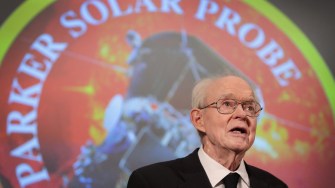 “The solar probe is going to a region of space that has never been explored before. It’s very exciting that we’ll finally get a look,” said Eugene Parker, who was on the UChicago faculty from 1955 to 1995. “One would like to have some more detailed measurements of what’s going on in the solar wind. I’m sure that there will be some surprises. There always are.”

Eugene Parker is 91 and will witness the launch—provided it actually comes off on Saturday, which appears likely.

The $1.5 billion project will be the first to study this closely what makes the sun “tick.” After making 24 orbits around the sun, including seven Jupiter fly-bys to create a sort of slingshot effect as well as overcome the inertia of launching from our own planet, it will reach a top speed of 430,000 miles per hour—the fastest human object ever. 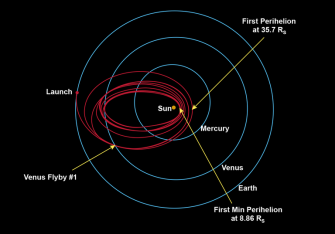 The 10-foot by 3-foot spacecraft will then head right for the solar corona, with an 8-foot, 4.5 inch (11.43 cm) thick heat shield protecting it from direct heat; instruments onboard Parker will remain a cool 85 degrees F, or 30 degrees C.

The four primary measurements and tools used will be:

1. A camera, called the Wide-Field Imager, to capture photographs of what the spacecraft is about to fly through. This will work in tandem with other instruments to be able to “see” things like solar flares as they are measured. However, once it gets at its closest point to the sun, there will be no possibility to capture any direct images due to the heat.

2) The FIELDS experiment will measure—and map—electric and magnetic fields within the sun’s atmosphere.

3) The Solar Winds Electrons Alphas and Protons will collect particles of the solar wind to measure speed and temperature.

4) The Integrated Science Investigation of the Sun will try to figure out how those same particles ended up moving so fast, at more than 1 million miles per hour (500 KM/sec). 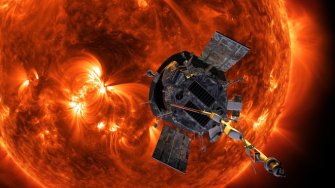 The solar wind and other phenomena such as solar flares and coronal mass ejections all make up what’s known as “space weather.” While normally benign, creating such beauties as the aurora borealis or northern lights, sometimes space weather can make communications equipment fail and navigation satellites go dark. At their strongest, they can even affect power grids on our own planet’s surface.

One primary goal of the mission over its 6+ year lifespan will be understanding these solar phenomena and the sun’s atmosphere to get a better idea of just how to protect such equipment from space weather, including how to predict it better. But another is to better understand why the sun’s corona is millions of degrees hotter than the surface.

Meanwhile, you can step outside and see the Perseid meteor shower, peaking early Monday morning.

Getting serious about plant intelligence