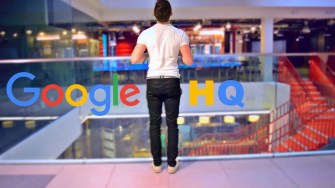 — Larry and Serge met when Serge was assigned to show Larry around the Stanford campus. They hit it off (in a geek way) and decided to work together. The first project they worked on was a webpage ranking system they initially called BackRub, due to the way they were getting their links. The more links a page had to it, the higher ranking it had on BackRub. It’s pretty similar to how Google still ranks their pages. The process has gotten more complicated over the years, but the way BackRub used to sort data is similar to how Google still does it today.

— Google is a play on “googol”, a mathematical term for a very (very) large number — 1 with 100 zeros after it. They came up with the name as it helped describe (in a geek way… notice a pattern?) how much data they were sorting through in order to come up with the right result.

— Want to see Larry and Serge’s awesomely ’90s early web-pages? They’re pretty incredible, and not only because they both contain passing mentions to arguably the biggest company of all time. Thanks to WebArchive you can see Larry’s page here and Sergey’s page here. 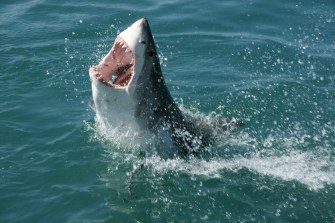 — Sharks predate dinosaurs. They haven’t, as a species, evolved a whole lot in 400 million years. Two-thirds a shark’s brain is dedicated to smell. Sharks can detect one part blood in a million parts water. A good way to visualize that is being able to easily taste a teaspoon of coca cola if it was in an Olympic-size swimming pool full of water.

— Since sharks have eyes on the sides of their head and they swim from side to side, they have a massive field of vision. It’s impossible to creep up behind one and surprise it; you can only “escape” a shark’s view if you’re directly behind its head or under its nose. Speaking of which, the best way to escape a shark is to punch it in its nose. Due to the number of olfactory lobes sharks use to smell, their schnozz is incredibly sensitive.

— Bull sharks can live in fresh water and salt water (the only shark able to do so) meaning they can swim up rivers. They have been found as far inland as Minnesota, albeit very rarely.

— Not my joke but it’s still true: if you watch the movie Jaws backward, it’s a movie about a shark that keeps throwing up people until they have to open a beach.

— Not to be all “college stoner”, but money itself isn’t worth anything more than what its printed on. A penny costs about 2.4¢ to make, and a $100 bill costs just 12.5¢ to make, as the value is assigned by the U.S. Treasury. The most expensive penny—a 1943 copper alloy penny of which only 40 were made—is technically still worth just 1¢, but last sold at auction for $1.7 million due to its rarity.

— The eagle on the back of a dollar? It was a real eagle named “Peter the Mint Eagle” and lived at the Philadelphia Mint itself from 1830 to 1836. They let him out and he’d apparently fly around the Mint, pretty happy to be there. He died in 1836 after a minor accident with a coin press made it unable for him to fly.

— Speaking of flying, the TSA collects about $2098 every day just in loose change left behind in airport security.

— 9 out of 10 pieces of American “paper” currency have trace amounts of cocaine on them. Paper money isn’t actually made of paper; U.S. paper money is 75% cloth and 25% linen.

Which religious adherents have the longest life expectancy?

The scales are not in favor for the most religious among us.