Exoplanets are hot right now. In the popularity sense. Thermally, they’re also cold and medium. But ever since the first one was discovered nearly 26 years ago — or 9,457 days as of this writing — we’ve been fascinated by them. Some people are intrigued by the potential any of them may hold for migration from Earth should it become inhabitable. Some wonder if other life on our level could be there. And then there’s their most undeniable value: science. If you’ve been having trouble keeping track of what we’ve found so far, the Planetary Habitability Laboratory (PHL) of the University of Puerto Rico at Arecibo has just published its Periodic Table of Exoplanets, which it’ll presumably keep up to date as more of them are found. It’s actually a set of three tables:

The PHL is in a great location for this kind of thing, being near one of the world’s most important celestial observatories, the Arecibo Telescope.

The exoplanets are far away, of course, and so we know little about them other than their sizes and distances from their stars. It’s with these two attributes that PHL is able to sort the exoplanets.

Each table’s column, or Y axis, contains the exoplanets of a particular size, going from the smallest — miniterrans — at the left, to the largest — Jovians — at the right.

Here’s an overview of how many exoplanets of each type there are so far: 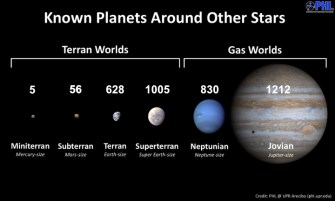 There’s also the issue of an exoplanet’s distance from its sun, which is shown along the X axis at the left edge of each table: 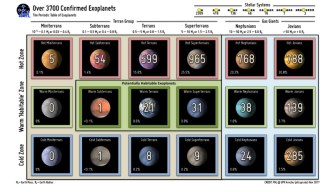 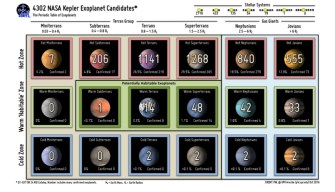 Planetary Bodies in Our Own Solar System 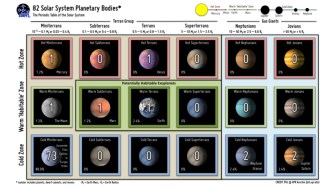 These counts are accurate as of November 15, 2017. Some of the candidates will probably be confirmed and others ruled out in time. Many more will no doubt be found eventually out there in this vast, vast universe that’s probably teeming with life. At least these bodies are places that life could be.

There may be 300 million habitable planets in our galaxy

A new study from NASA and the SETI Institute comes up with an exciting number of potentially life-supporting planets.
Hard Science

How the new economics of space exploration changes everything

“One small step for man” costs a lot of money. Who’s going to help pay the bill for the next bout of space exploration?
▸
with
Michio Kaku
Hard Science

Mining asteroids might seem like the stuff of science fiction, but there are companies and a few governments already working hard to make it real.
Up Next
Surprising Science

Why This Nobel Prize-Winning Economist Thinks Bitcoin Should Be “Outlawed”