Super Bowl LII is nearing its kickoff on February 4th at 6:30PM EST and football pundits—professional and armchair alike—are busy speculating whether the New England Patriots or the Philadelphia Eagles will rise victorious.

And given that football is an athletic competition, it’s hard not to notice the sheer size of some players, particularly offensive linemen charged with protecting any team’s greatest asset: the quarterback.

Over the years, offensive linemen have gotten bigger and bigger, and health sciences from neurology to nutrition have reached new vistas. Concerns for player health have permeated the National Football League as a result.

A league growing in girth

The heaviest player in Super Bowl I came in at 260 pounds. All offensive lines in modern NFL average players of over 300 pounds, with many being even bulkier, like the Raiders’ starting line which averaged 327 lbs per player in 2016.

While these players are clearly big and strong, are they potentially setting themselves up for health-related issues down the line?

The CDC defines “obesity” as having a Body Mass Index (BMI) of over 30. BMI, if you recall, is calculated by dividing the body’s mass by the square of the body height. How does obesity impact health? Often very negatively, leading to such illnesses as diabetes, high blood pressure, high cholesterol levels, heart attacks due to coronary heart disease, stroke, bone and joint problems, sleep apnea and some cancers. The host of potential problems associated with a high BMI calls the size of some modern football players into question. Are they risking ill health to keep up with the constantly increasing NFL player sizes? 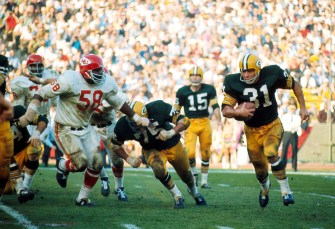 Let’s look at how the offensive lines of this year’s Super Bowl teams stack up. One can argue that the Philadelphia’s linemen have an advantage by combining superior size and speed.

As Robert Mays reports for The Ringer, the Philadelphia right tackle Lane Johnson has a physique “rarely seen for an offensive lineman.” He’s 6-foot-6 and weighs 303 pounds, which would give him the BMI of 35. While that’s technically “obese,” Johnson ran a 4.72 in the 40-yard dash (which puts him in the 99th percentile), has a 34-inch vertical leap (96th percentile), and pulled off a 118-inch broad jump (99th percentile). Mays says he’s arguably “the most athletic offensive line prospect this century.”

According to pre-draft workout data from Mockdraftable.com, Philadelphia’s center Jason Kelce, with a BMI of 36.9 (derived from his 6’3”, 295 pound frame), has the best 20-yard shuttle time (4.14 seconds) and the second-best three-cone drill time (7.22 seconds) in 18 years of data gathered by the site. 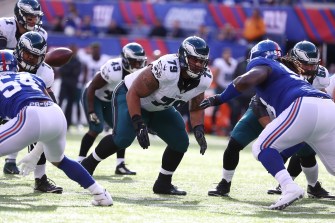 Brandon Brooks #79 of the Philadelphia Eagles in action against the New York Giants during their game at MetLife Stadium on November 6, 2016 in East Rutherford, New Jersey. (Photo by Al Bello/Getty Images)

The Patriots line by comparison

The New England offensive linemen include the right tackle Cameron Fleming (6’6”, 320 lbs, 37 BMI), who ran a 5.28s 40-yard dash. While he has the same height, he is heavier and slower than Philly’s Lane Johnson. 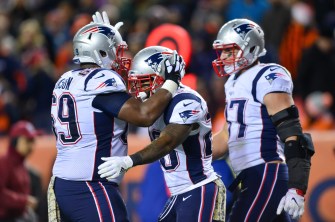 A glittering sculpture is now in orbit and astronomers are furious

A rocket company launches an orbiting artwork for all the world to see, whether they want to or not.