The SUNY College of Environmental Science and Forestry has compiled a list of the top 10 new species as discovered and described by science in the last 12 months.

They’re all pretty amazing, I think. See if you agree:

Ancoracysta twista is a single-celled organism that has both a flagella (a kind of whip tail for self-propulsion), and harpoon-ilke things, called ancoracysts, to impale and consume other creatures. It’s not been found in the wild yet; this was discovered living in a San Diego tropical aquarium, living on brain coral.

Etymology: The species name Ancoracysta twista refers to the twirling motion the protist makes while swimming. 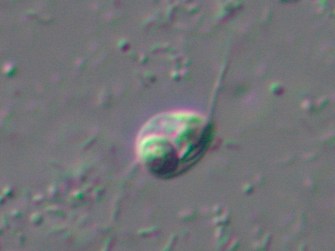 Dinizia jueirana-facao is a critically endangered tree in Brazil. Only 25 are known to exist. Each weighs 62 tons, and it features fruit that’s a foot long and is considered part of the legume family. These trees have long been known, but were wrapped up in mistaken identity: “The legume genus Dinizia was known, until now, from a single Amazonian tree species, D. excelsa, discovered nearly 100 years ago.”

Etymology: The species name refers to the local name for the tree, which is ‘jueirana-facão’. 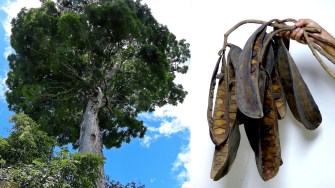 Epimeria quasimodo is a hunchback shrimp—but I’ll bet you guessed that from the name. Shown here are four different sub-species of the genus, which were discovered in the Southern Ocean off Antarctica. 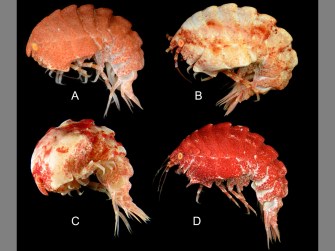 Nymphister kronaueri, a Costa Rican beetle that basically hitchhikes on army ants, as seen in the photo below. Nice work if you can get it, eh? The beetle is part of the myrmecophiles family—literally, ant lovers. “The beetle uses its mouthparts to grab the skinny portion of the host abdomen and hang on, letting the ant do the walking,” writes the ESF.

Etymology: This beetle is named in honor of Daniel Kronauer, the field biologist who discovered the species on the backs of army ants. 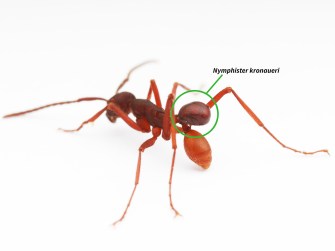 Pongo tapanuliensis, the Tapanuli Orangutan, is an endangered species. It was discovered in southern Sumatra, Indonesia and only 800 are known to exist. “Genomic evidence suggests that while the northern Sumatra and Borneo species separated about 674 thousand years ago, this southern Sumatra species diverged much earlier, about 3.38 million years ago.” 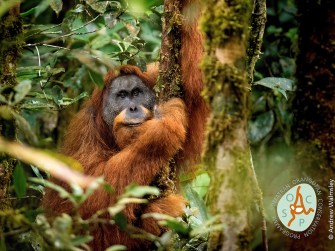 6) Pseudoliparis swirei, a.k.a Swire’s Snailfish was discovered in the Western Pacific Ocean, deep in the Mariana Trench. It lives around 25,000 feet deep—the deepest of all known fish. It’s about the size of a tadpole, and looks a bit like one, too.

Etymology: Named in honor of sailor Herbert Swire, one of the officers of the HMS Challenger mission that discovered the Mariana Trench in 1875.

Sciaphila sugimotoi, also known as the heterotrophic flower, was found on Ishigaki Island, Japan, and it lives by basically siphoning nutrition off the fungus it lives on but without causing it any harm. It’s quite endangered since it depends on a fragile ecosystem to survive; there are only about 40 known plants in existence.

Etymology: The species is named in honor of Takaomi Sugimoto who collected the first specimens. 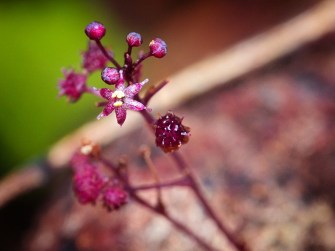 Thiolava veneris, a volcanic bacterium from the Canary Islands, is also known as Venus’ hair. After the underwater volcano Tagoro erupted in 2011 massive amounts of carbon dioxide, hydrogen sulfide, and a severe reduction in oxygen wiped out any possible life for several years. This new species of proteobacteria finally grew on what remained.

Etymology: The species name is in reference to Venus, ancient Roman goddess of beauty and love. 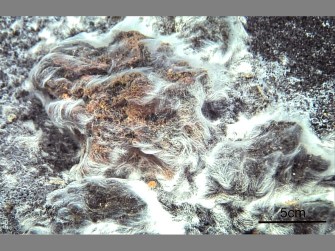 Wakaleo schouteni, the Marsupial Lion from Australia. It is actually from about 23 million years ago, but fossilized remains were found in 2017, which allowed scientists to identify this species. About the size of a Siberian husky, it was an omnivore and spent some time in trees.

Etymology: The new species was named in honor of paleoartist Peter Schouten. 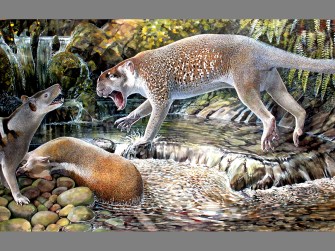 Xuedytes bellus, a cave beetle discovered in China. Different species of cave beetles often share similar characteristics, like a small body, spider-like legs, no wings, eyes or pigemntation—the result of living in permanent darkness. “Such troglobitic beetles are a prime example of convergent evolution, that is, unrelated species evolving similar attributes as adaptions to similar selection forces,” writes the ESF.

Etymology: The name bellus translates as beautiful which, as always, is in the eye of the beholder. 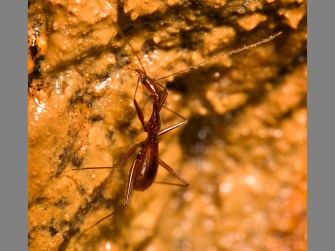 The changes humans bring to the environment, like pollution or pesticides, is spiking cancer rates in animals, according to a new study.