The longest lunar eclipse of the century will be an incredible sight for a good part of the world, and the penumbra and umbra (partial and total eclipse) will be cast to mostly the Middle East, south and eastern Africa, western and southeast Asia, and finally India.

It happens when Earth casts its shadow onto the lunar surface as it passes between the sun and moon.

Alas, none of it will be visible in North America. You can, however, watch it as it happens, online at several locations: TimeAndDate.com has one, as does the Virtual Telescope Project. 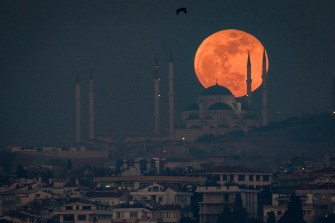 A Super Blue Blood Moon rises behind the Camlica Mosque on January 31, 2018 in Istanbul, Turkey. (Photo by Chris McGrath/Getty Images)

In total, the full lunar eclipse will last one hour and 42 minutes, the longest it will be this century. The moon will turn into a dark glowing red disc, which is from the sun’s rays passing through Earth’s atmosphere and being filtered by it. That color is where the term “blood moon” comes from.

Here’s an image captured in 2014 when that happened; if you have even decent photographic equipment, you can do the same. 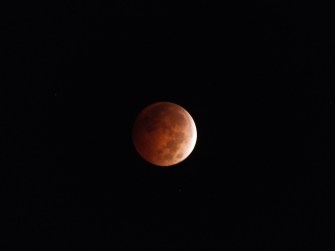 Noah Petro, a scientist at NASA’s Goddard Space Flight Center, gave some guidance to ABC News for those willing to travel to see it, including “… Either renting a boat and driving it to the middle of the Indian Ocean or visiting relatives in Ethiopia for the best seat in the house.”

The next shot at seeing a total lunar eclipse, though not as long as this one, will be January 21, 2019; it will be a super moon, just like this one, which is a full moon or new moon that is at its closest point to the Earth in its orbit.

There’s also a partial lunar eclipse in July of 2019 in the United States.

Street grids matter more to your commute than you might think