The Malaysian Palm Oil Board and Orion Genomics have developed a leaf-punch test that can tell whether a young oil palm plant will be defective when it matures. The process works like this: Subsistence farmers use the devices, which cost about $4, to punch samples from their plants. Then they mail the samples to laboratories. A few weeks later, farmers receive the molecular test results and use the information to invest only in good plants, while tossing the bad ones. It’s a shift that could drastically increase revenue and sustainability in the industry.

“Our work in this area has been driven in part by environmental concerns,” said Robert Martienssen, co-founder of Orion Genomics and a professor of plant genetics at Cold Spring Harbor Laboratory. “As we devise ways to reliably boost yields, we thereby lessen the economic motivation to spread oil palm holdings into sensitive rainforest areas that are important to preserve.” 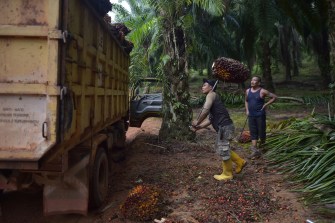 Palm oil is the most widely consumed vegetable oil on the planet, and it’s used in all types of products — shampoo, pizza, bio-diesel, lipstick, soap, and countless others. It’s also especially productive: One hectare of oil palm can produce 10 times more oil than an hectare of soybean. And for the thousands of subsistence farmers in Malaysia and Indonesia, where about 85 per cent of the world’s oil palm is produced, it’s a livelihood.

Still, the palm oil industry is often derided for its harmful impact on the environment and labor conditions. Raviga Sambanthamurthi, a biochemist and former director of the Malaysian Palm Oil Board’s Advanced Biotechnology and Breeding Centre, told Big Think that these criticisms miss the big picture.

“People really do not appreciate the fact that oil palm only occupies 5 per cent of the land that oil crops occupy, but it produces 50 per cent of the world’s oil,” Sambanthamurthi said. “You cannot run away from the fact that the world needs more oil in food. No other crop is going to give you that kind of yield. You have to clear so much more land if you’re going to produce some of the alternative oils.”

Although productive, there’s definitely room for improvement. Demand for oil palm is expected to triple from 2000 to 2050, and just a single percentage increase in yield could be worth hundreds of millions of dollars. But governments face the challenge of maintaining profits while protecting the environment. The solution seems to lie in improving quality over quantity.

“We don’t have much more land to open up, so we have no choice but to make oil palm more productive,” Sambanthamurthi said. 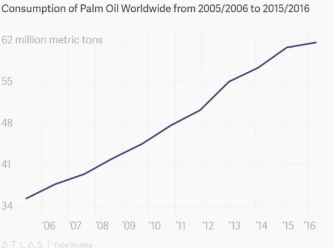 One way farmers have improved production has been to grow a specific type of plant. Farmers have long known that tenera plants — a hybrid of the two types of oil palm trees — produce the best fruit. In the 1970s, scientists tried to further improve production by cloning the highest-yielding tenera plants for mass reproduction.

“The clones are supposed to be identical to the parent, so you have the opportunity to choose the highest-yielding plants and clone them, so you can uniformly produce the best,” Sambanthamurthi said. “That was the thought, anyway.”

But something strange happened. Because of a mutant protein, some of the cloned plants started to produce abnormal (or “mantled”) fruit that was misshapen and lacking oil. This type of fruit is useless. The problem is farmers can’t tell which plants will produced mantled fruit until the plants mature, a process that takes three to four years. Worse, farmers can’t replace bad plants because the surrounding plants would shade out any new ones. So growing bad plants can be a decades-long bad investment.

This new leaf-punch device could eliminate that problem.

“If it only costs a couple bucks to know if it’s a good or bad plant, that’s a huge value,” said Nathan Lakey, a biochemist and executive at Orion, adding that a good plant produces about $750 to $800 worth of oil in its lifetime.

Lakey said this kind of genetic testing — or “molecular precision agriculture” — is a completely new concept. Researchers are already considering other ways to apply similar technology.

“Harvest traits like fruit color and plant height are major targets for introduction into oil palm by breeders,” Martienssen said. “The Malaysian Palm Oil Board and Orion have already identified the gene for fruit color, which should greatly accelerate breeding and provide plantation workers with simple but accurate visual cues for ripeness, further enhancing yield.”

Molecular precision agriculture technologies are in their early stages, and agricultural industries aren’t going to change overnight. Still, they might provide a new solution to an old problem: How do you increase profits while decreasing your environmental footprint?

“We really believe in sustainability, and we think technology is the way to go,” Sambanthamurthi said.

Texas snowstorms are due to rapid heating of the Arctic, say scientists

A warming Arctic Circle could be responsible for bursts of cold weather in the south.
The Past

Archaeologists discover a cave painting of a wild pig that is now the world’s oldest dated work of representational art.
The Present

Methane is 80 times more effective than carbon dioxide at trapping heat in the atmosphere.
The Present

Why generational pressure is the key to climate change policy

Change is coming, but not from the generation that currently holds positions of power.
▸
3 min
—
with
Daniel C. Esty
The Present

Why do the good guys have to beat the climate cheats?

There’s concrete tradeoff logic lurking beneath the numbers and market abstractions.
Up Next
Starts With A Bang

When we think about a long-term solution to our energy needs, none of today’s options are this good.“I would like nuclear fusion to become a practical power source. It would provide […]