Methane is the second most abundant greenhouse gas. Colorless, odorless, and lighter than air, methane (CH4) is some 80 times more effective at trapping the atmosphere’s heat than carbon dioxide. Scientists estimate it to be responsible for about 25 percent of current global warming. Since the Industrial Revolution, the amount of methane in the atmosphere has increased by at least 150 percent.

Still, it’s been hard to determine the primary emitters, and the extent to which natural processes are to blame.

Now, new research suggests that methane emissions from fossil fuels have been “vastly underestimated” by as much as 40 percent. The study focused on fossil methane, which is emitted through natural and anthropogenic sources like geologic seeps and the production of fossil fuels including natural gas. Biological methane is the gas’s other form, and it comes from natural sources like wetlands, and human activity like rice farming.

The findings, published in Nature, are based on analyses of pre-industrial ice samples obtained from glaciers in Greenland. Because these ice core samples show how much methane was in the atmosphere before the Industrial Revolution, the analyses can offer a more accurate estimate of the extent to which human activity has been responsible for the recent increases of atmospheric methane. 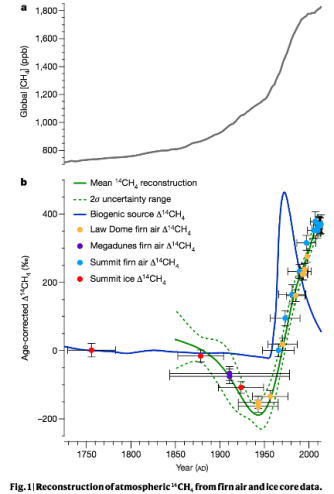 The results show that, prior to the Industrial Revolution, fossil methane emissions were about 1.6 to 5.4 teragrams. For context, the current estimate of total annual methane emissions is 172 to 195 teragrams. So, if the results are accurate, the implication is that human activity is almost entirely responsible for methane emissions, while natural contributors like gas seeps play a smaller role than previously thought. The results also suggest that the industry is likely underreporting the amount of methane leaks coming from various points in the supply chain, including processing, production, and transportation.

But that’s not all bad news to lead study author Benjamin Hmiel, a researcher at the University of Rochester. 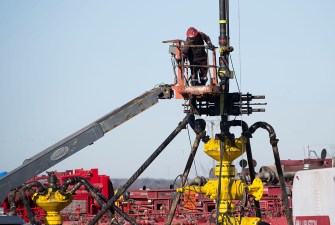 “I don’t want to get too hopeless on this because my data does have a positive implication: Most of the methane emissions are anthropogenic (human-caused), so we have more control,” Hmiel told USA Today. “If we can reduce our (methane) emissions, it’s going to have more of an impact. […] Placing stricter methane emission regulations on the fossil-fuel industry will have the potential to reduce future global warming to a larger extent than previously thought.”

Methane emissions come from all sectors of the fossil fuel industry. But natural gas seems to be an especially dirty contributor, mainly because of the large amounts of gas that’s lost during the production process. This leakage challenges the idea that natural gas is a relatively clean “bridge fuel” that society can burn as it develops more renewable energy sources. For example, a recent study found that the methane leakage rate in the U.S. natural gas supply chain was much higher than previous estimates from the Environmental Protection Agency. The implication: Natural gas comes with steep hidden costs.

The good news is that methane has a relatively short atmospheric lifespan. Unlike carbon dioxide, which can linger in the atmosphere for about 200 years, methane vanishes after about a decade. Its heat-trapping power, however, makes it a serious climate threat over the short term.

Although reducing methane leaks in the natural gas supply chain might be difficult, many experts argue that it’s one of the more inexpensive and straightforward ways to curb greenhouse gas emissions. Beyond tightening regulations regarding leak monitoring and equipment surveys, a 2018 study published in Science recommended several ways gas companies can reduce methane leaks:

Steven Hamburg, co-author of the study, said in a statement:
“Scientists have uncovered a huge problem, but also an enormous opportunity. Reducing methane emissions from the oil and gas sector is the fastest, most ­cost-effective way we have to slow the rate of warming today, even as the larger transition to ­lower-carbon energy continues.”
Tags
atmosphereclimate changeenvironmentglobal warmingmethaneoilpollution
In this article
atmosphereclimate changeenvironmentglobal warmingmethaneoilpollution
Related
Health

The story of “Lift Every Voice and Sing”

A song many consider the black national anthem rises again in the United States.