Investing in a cryptocurrency like Bitcoin is a very existential experience. You get incredible highs and dizzying lows. And a lot of questions in between. After hitting a record of nearly $20,000 in December 2017, Bitcoin’s price has been a roller coaster of late. It went up to $11,440 per coin in mid-February 2018, a welcome recovery from trading as low as $6,000 just several days earlier.

Other cryptocurrencies are also not having the steadiest of months. On February 2, over $100 billionwas wiped from the global cryptocurrency market, all in 24 hours. The sell-off was prompted by concerns that prices of digital currencies were artificially inflated as well as regulation talk in India and South Korea, one of the biggest cryptocurrency markets in the world.

Some analysts are not too concerned with such volatility, however, seeing in it a natural lifecycle of cryptocurrency stock. In fact, Tom Lee ofFundstrat Global Advisors predicts that by July 2018, Bitcoin will be back up to $20,000 and reach $25,000 by the end of the year. He finds that judging by historical performance, it takes Bitcoin about 85 days “to recover prior highs” after a period of bottoming out.

Vitalik Buterin, the founder of the cryptocurrency Ethereum is less bullish. He warned last week that such currencies are really not the best place to put your life’s savings since they are new and “hyper-volatile,” with the possibility to “drop to near-zero at any time.” Instead, “traditional assets are still your safest bet,” added Buterin.

This chart from Coinbase shows you the wild ride bitcoin has been on in the past year:

While big banks may be unfriendly to digital money, its prospects are likely to ebb and flow with the news cycle and other factors. How does the price of a cryptocurrency like Bitcoin get decided?

The price of bitcoin should be determined simply through supply and demand as is the case for usual stocks but, as Fortune magazine’s Jen Wiecznersays, bitcoin is also affected by hype. Other stocks aren’t generally so impacted by that.

What the hype does is suddenly attract crowds of investors, which makes the stock price of bitcoin go up rapidly, attracting ever more people until reaching a point where the price becomes overinflated and adjusts. Bitcoin trades in waves, following patterns of record growth and highs by downturns and valleys. Similarly to Tom Lee, Wieczner thinks that there are market adjustments where the price goes about 20% down after the cryptocurrency hits a new high. 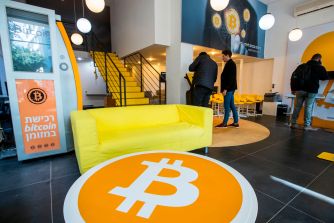 Another effect on the price comes from the fact that bitcoins are digitally mined. There is potentially a limitation on the number of bitcoins that can be mined. From the inception, about 16.5 million bitcoins have been produced. At some point, when the cap of 21 million will be reached, no more bitcoins will be available. This can create a scarcity of bitcoins, potentially driving its price even higher.

Speculating on whether a cryptocurrency’s price will go up is one attraction for the buyers. Another way to make (or lose) money on a digital currency is through ICOs.

An ICO or an Initial Coin Offering is a method of crowdfunding cryptocurrencies, providing capital for crypto startups. 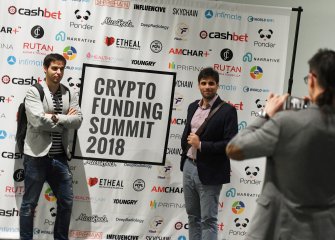 Unlike an IPO (initial public offering) when a company’s shares are sold to investors, in ICOs the investors buy the company’s “tokens”. These tokens can go up in value if the cryptocurrency or the venture being funded is successful. Once the ICO’s funding goal is met, the tokens are supposed to become functional units of currency.

Crypto companies like Ethereum raised money with a token sale.

An ICO can get the company money while bypassing costly compliance processes, banks, and venture capitalists. This is also the one big issue with ICOs that make them controversial: they are unregulated.

For investors, ICOs can be dangerous because of the lack of regulation. Startups are able to bypass a lot of the fundraising procedures required as part of IPOs and can determine the ICO value arbitrarily, explains EmptyBucket. This can lead to “high valuations and often overcapitalization” of the currency undergoing an ICO. Experts also warn that investors should have technical expertise and make sure to get sufficient information before investing into an ICO.

Why you can never truly be an ex-Catholic

The Vatican puts the number of Catholics in the world at 1.2 billion. But is that number accurate? And who do they count among their ranks?