James Longcroft, a Scottish inventor, has created a disposable water bottle that disintegrates into nothing in salt water in just three weeks. Essentially a paper bottle with a biodegradable, waterproof liner, it is being considered a major breakthrough in combating the trash problem that is plaguing our oceans. With trash-islands the size of Texas being discovered and monitored in the Pacific, James Longcroft’s invention couldn’t come at a better time.

Perhaps the oddest thing about the news, though, is the fact that the bottles will face quite a battle before they’re widely adopted. Plastic lobbying spending topped $54,000,000 in 2017, and Longcroft has been making the bottles more-or-less by hand in his kitchen in Edinburgh, Scotland. But while Longcroft’s bottles only take less than a month to fully disappear (and the caps that top the bottle dissolve in less than a year), a regular plastic water bottle lasts an astounding 450 years before going away. Which is pretty insane for something we use once and hold in our hands for less than two minutes. 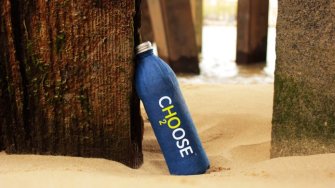 A prototype of the Choose bottle. (Photo: ch2oose.co.uk)

The bottles don’t cost much more to make—about 7¢ on average more than a regular plastic bottle—and could cut down on waste dramatically. An estimated 14 billion pounds of trash goes into our oceans each year, the majority of it plastic.

Longcroft is currently trying to find crowd-funding for his invention so he can make the bottles on a commercial level. He’s only asking for $34,000—less than the price of a new car. You can donate to the cause right here. Unless you’re a libertarian contrarian who cares more about plastic industry profits than the future of our planet, that’s good news for everybody.

Silicon Valley might just be missing the most important aspect of being human: the ability to feel.