Where does 99% of an atom’s mass come from? This is one of the most compelling mysteries in quantum mechanics today. Finding out however, is going to take an incredible amount of energy and resources, not to mention some really precise equipment. That’s where the Electron-Ion Collider (EIC) comes in. This facility, two actually—which are currently being constructed, are likely to deepen our understanding of the universe in ways that we can’t predict nor fathom. Moreover, the Electron-Ion Collider (EIC) is expected to birth technological capabilities heretofore unimagined.

Physicists involved with the project say it’s analogous to how a greater understanding of electricity birthed the modern world in the last century. Cars, the electric light, airplanes, and computers (even your smart phone) all came about as a result. But what might a greater understanding of the forces inside a proton or neutron reveal? Two such facilities will be upgraded to create EICs.

One is at the Jefferson Lab in Newport News, Virginia. The upgrade there will cost $1 billion and will be operated by 100 physicists from 20 labs and universities across the globe. The other will occur at the Brookhaven National Lab in Upton, New York. That’ll cost $1.5 billion.

Each site will contain newly designed and as of yet, untested equipment, developed by JLab, Brookhaven, and MIT scientists. The original plan was thought up by the Nuclear Science Advisory Committee (NSAC), a panel of experts who write plans decades in advance and submit them to the National Science Foundation and the US Department of Energy. 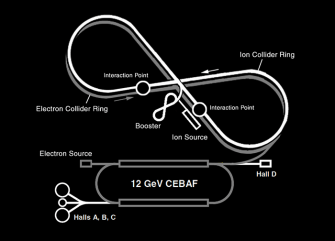 Nuclear physicist and chair of the NSAC Donald Geesaman, told Nature, “Until we have the EIC, there are huge areas of nuclear physics that we are not going to make progress in.” Each collider will contribute to the study of Quantum Chromodynamics (QCD). THis is the theory of how quarks and gluons comprise the nuclei of protons and neutrons. Gluons are the “glue” that hold quarks in place. What’s remarkable is that through this act, gluons then hold all of the visible matter of the universe together. Perplexingly, the force exerted by gluons only accounts for 1% of the total mass of any object.

Two of the main goals of the project include: precision imaging of quarks and gluons to find out their spin, “flavor,” and spatial structure, and “definitive study of the universal nature of strong gluon fields in nuclei.” Experiments at each EIC may also help explain the spin of protons, a quantum mechanical mystery three decades old. The essential question is, what accounts for two-thirds of a proton’s spin? Only a third can be explained by the quarks held within it.  Researchers will also investigate a rare state of matter containing only gluons.

The Brookhaven Lab currently has a Relativistic Heavy Ion Collider (RHIC), which investigates gluons and quarks, as does the Large Haldron Collider at CERN. In this way, scientists at each hope to recreate the energy conditions thought to have existed at the time of the early universe. These facilities do so by taking heavy ions or neutrons and crashing them into stationary material. The EIC would instead accelerate protons (ions) on one side and electrons on the other, each at nearly the speed of light, and slam them into one another with pinpoint accuracy. 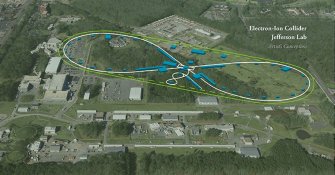 Location of the new EIC currently under construction at the Jefferson Lab. Image Credit: Jefferson Lab, US Dept. of Energy.

Engineers at the Jefferson Lab are taking advantage of the Continuous Electron Beam Accelerator Facility (CEBAF) already there, and building upon it. In use for 15 years, the CEBAF acts like an enormous microscope. It’s able to examine things a million times smaller than an atom. Here, scientists take electrons containing extra energy and slam them into stationary atomic nuclei at almost the speed of light. Physicists have run such experiments on hydrogen, helium, carbon, and lead atoms.

To make it into an EIC, another particle accelerator is being built, one that intersects the existing one. Here, high energy electron beams and intense proton beams (or heavy atomic nuclei) would be steered into head-on collisions at nearly the speed of light. At Brookhaven too, another electron ring will be added, but in a different configuration, to accomplish this same feat.

According to the JLab’s website, the difference between their old facility and the new one is like “…the difference between a car crashing into a wall (speeding electrons into a stationary target), vs. a car crashing head-on into another car (speeding electrons into speeding ions).” These collisions are not only at higher energy, but are also more precise, allowing scientists to be able to study the wreckage and so the constituent parts of each particle, in far greater detail.

19 online AI education classes that you can take right now

AI is the way of the future. And you can teach yourself how to master this incredible new technology from some of the top schools around the globe. In some cases, for free.