In the second phase of a years-long pilot project, Microsoft has installed an underwater data center in the North Sea near Scotland’s Orkney Islands.

Microsoft has been experimenting with its subsea data center technology, dubbed Project Natick, for two reasons: cooling efficiency and latency.

The 854 servers in the shipping container-sized data center are cooled by the cold waters found near the seafloor. Cooling is a major cost in any large-scale computing operation, so the ocean’s naturally low temperatures reduce the money and energy needed to maintain the servers that connect other computers to the internet.

“When I first heard about this I thought, “Water…electricity, why would you do that?’” said Ben Cutler, the project manager who led the team behind the experiment, in a story about the project on Microsoft’s new site. “But as you think more about it, it actually makes a lot of sense.”

Project Natick is currently in its second phase, in which the data center is still physically hooked up to an onshore, renewable power source. Currently, the centers are expected to run without maintenance for 5 years.

“Future Natick research will explore directly powering a Natick datacenter by a co-located ocean-based green power system, such as offshore wind or tide, with no grid connection,” reads an entry on the Microsoft website.

On the consumer side, subsea data centers could bring faster, smoother connection for internet users. That’s because having servers near your computer reduces latency, defined as the time it takes data to travel between its source and destination.

Microsoft notes that more than half of the world’s population lives within 120 miles of the coast, and submerging a prepackaged data center in the ocean would be easier than constructing a land-based facility. 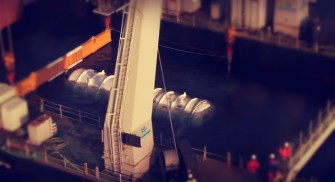 It’s not the first time a tech company has tried to leverage nature to offset costs. In 2011, Microsoft experimented with the ‘data furnace’ concept, which aims to heat homes using the heat generated by servers. In 2013, Facebook began utilizing the frigid temperatures of northern Sweden to cool its Luleå data center.

This week’s development comes 4 years after Project Natrick launched. Microsoft notes that its subsea technology isn’t close to replacing the land-based data centers that connect most of the world to the internet.

Still, the economic and environmental perks of subsea data centers could someday encourage companies to implement the technology on a large scale.

“We see this as an opportunity to field long-lived, resilient datacenters that operate ‘lights out’—nobody on site—with very high reliability for the entire life of the deployment, possibly as long as 10 years,” Microsoft said.

Technology entrepreneur and CEO of X Prize Foundation, Peter Diamandis, believes that the sweet spot of true innovation is found in the sharing of “crazy ideas.” While a company or […]