The future is a scary place. According to a 2017 survey, manyAmericans’ greatest fears—economic collapse, another world war, not having enough money for the future, etc.—are concerns over the state of tomorrow. (Although it is worth noting that their number one fear, corrupt government officials, is a clear and ever-present danger.)

Americans are hardly alone. People are primed to worry over their inability to control their future environment. Tomorrow’s unpredictability requires that our brains view it with suspicion, as a potential threat to our survival. Unfortunately for our survival-primed brains, technology’s influence is making our future ever more protean.

Today’s technological advancements occur exponentially, and the average person will have to adjust to changes that would have previously taken several generations. Many of these advancements will, no doubt, be beneficial. Others, however, could prove less than advantageous. 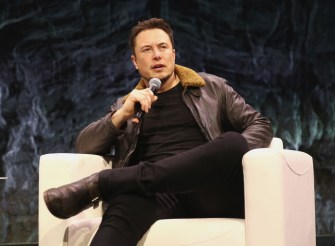 Elon Musk speaks onstage at SXSW 2018 in Austin, Texas. During the conversation, Musk shared his fears over the future of AI.

Imagine a paperclip company creates an artificial superintelligence and tasks it with the single goal of making as many paperclips as possible. The company’s stock soars, and humanity enters the golden age of the paperclip.

But something unexpected happens. The AI surveys the natural resources we need to survive and decides those could go a long way toward paperclip manufacturing. It consumes those resources in an effort to fulfill its prime directive, “make as many paperclips as possible,” and wipes out humanity in the process.

This thought experiment, devised byOxford professor Nick Bostrom, details just one potential danger in creating an artificial superintelligence—that being, we need to be very careful with our words.

“I’m very close to the cutting-edge of AI, and it scares the hell out of me,” Elon Musk, CEO of Tesla and SpaceX, said atSXSW 2018. “It is capable of vastly more than anyone knows, and the rate of improvement is exponential. […] We have to figure out some way to ensure that the advent of digital superintelligence is one which is symbiotic with humanity. I think that’s the single biggest exponential crisis that we face.”

Bostrom and Musk paint worst-case scenarios, but there are plenty of worries over artificial superintelligence that don’t end in human genocide.Experts have postulated that AI could automate terrorism, mass produce propaganda, and streamline hacking to devastating effects.

Americans have steadily been losing work to automation for decades, but the trend appears to be picking up speed. Self-driving cars, for example, could soondisplace 5 million workers nationwide.

But taxi drivers aren’t the only people who should be worried. A McKinsey Global Institute study suggests that nearly 70 million people couldlose their jobs to automation by 2030. U.S. workers in retail, agriculture, manufacturing, and food services may find their jobs on the automated chopping block.

No wonder Americans fear the incoming robo-revolution. APew Research report found that 72 percent of U.S. adults surveyed expressed worry over automation, compared with 33 percent who were enthusiastic. A majority were also hesitant to consider using automated services such as driverless cars or robotic caregivers.

We create robots to fight our wars for us, but they turn on their masters and bring ruin to our world. It’s a classic science fiction conceit, and one we’re much closer to than, say,first contact.Autonomous drones are already available, and it is only a matter of time before they make the leap from selfie-machine to combatant.

The Campaign to Stop Killer Robots worries about this future, but not about robotic warriors turning on their masters. Rather, the campaign believes that autonomous weapons will lead to an erosion of accountability in armed conflicts between states.

The use of fully autonomous weapons would create an accountability gap as there is no clarity on who would be legally responsible for a robot’s actions: the commander, programmer, manufacture, or robot itself? Without accountability, these parties would have less incentive to ensure robots did not endanger civilians and victims would be left unsatisfied that someone was punished for the harm they experienced.

Considering the difficulties already associated withprosecuting war crimes, the concern is worth consideration. 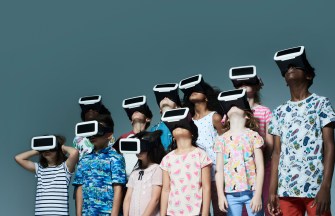 Virtual reality is here, and it looks way better than the ’80s led us to believe it would. But as with any new technology, trepidation has welled up over to how it will affect people’s wellbeing,especially children.

“The gap between ‘things that happen to my character’ and ‘things that happen to me’ is bridged,” Scott Stephen, a VR designer, toldThe New Yorker. “The way I process these scares is not through the eyes of a person using their critical media-viewing faculty but through eyes of I, the self, with all of the very human, systems-level, subconscious voodoo that comes along with that.”

Because the technology’s availability has been limited until recently,not many studies that have looked at VR’s effects on children, and the studies we have aren’t conclusive. One study showed that children were more likely to create a false memory under VR’s influence, but another study has shown its ability to reduce anxiety in children undergoing medical procedures.

In the coming years, we could cultivate biomaterials in labs to replace failing organs and splice genes in utero so children won’t suffer the debilitating inherited diseases of their forebearers. Biomedical technologies promise a future where we are all better, stronger, faster and at the fraction of the cost of one Steve Austin.

But a2016 Pew Research report suggests that Americans don’t see these medical advancements as incoming miracles. Of those surveyed, a majority said they were either somewhat or very worried about brain chips that make us smarter (69 percent), genetic editing to reduce babies’ risk of disease (68 percent), and synthetic blood to improve physical abilities (63 percent).

Their reasoning? Such enhancements “could exacerbate the divide between haves and have-nots” and be used as a measure of superiority by their recipients. The more religious a participant, the more likely they were to believe such technologies were “meddling with nature” and “crosses a line we should not cross.” Mostly though, we just loathe the idea of neighbors throwing a get-together to show off their fancy new brain chips. 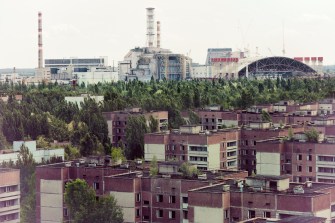 The ghost town of Pripyat, Ukraine, with the Chernobyl nuclear reactor in the background.

On Aug. 6, 1945, the United States dropped an atomic bomb on Hiroshima, Japan. Since then, nuclear weapons have been an existential threat to our species. As of Jan. 2018, the Bulletin of Atomic Scientists set the Doomsday Clock at a mere two minutes to midnight.

But weapons of mass destruction aren’t why nuclear made this list. It’s here because of people dread nuclear energy.

In a2016 Gallup poll, a majority of Americans surveyed (54 percent) were opposed to nuclear energy, the first time a majority opposed the prospect since 1994, when Gallup first started asking the question. Of course, it’s not hard to where the fear originates. When nuclear power plants fail, they fail with devastating consequences. Three Mile Island, Chernobyl, Fukushima, the list is longer than we’d like.

But some experts argue that we need nuclear energy to decarbonize quickly enough to avert major climate catastrophe. Not only does nuclear power produce immense amounts of energy, it also has a low-carbon footprint (lower than even solar).

“In most of the world, especially the rich world, they’re not talking about building new reactors. We’re actually talking about taking reactors down before their lifetimes are over,” Michael Shellenberger, president of Environmental Progress, said during hisTED talk. “[The United States] could lose half of our reactors over the next 15 years, which would wipe out 40 percent of the emissions reductions we’re supposed to get under the Clean Power Plan.”

So, is the future a technological murder mansion, a place where every dark corner hides a robotic horror waiting to kill all humans or, at the very least, take all our jobs? Maybe, but probably not.

People have a strong desire to predict the course of tomorrow, and whole social movements, from futurists to psychics to horoscopes, have sprung up to meet that demand. Such conjectures return to us a semblance of control with regards to our future environment.

Thing is,we are incredibly bad at predicting the future.

To pick a few well-known examples: In the late 18th century Thomas Malthus argued that unless family size was regulated, humanity would overpopulate the planet and create amisery of famine. In 1989 Francis Fukuyama foresaw the end of history. And in 1998 theY2K bug was predicted to wipe out computer networks across the world.

But Malthus couldn’t predict the technological advancements in agriculture that could feedbillions more people than existed in his day; Fukuyama could not foresee the political upheaval of events such as 9/11; and Y2K doomsayers, well, they were just wrong.

Even if these six fears come to pass — and some of them surely will — they aren’t guaranteed to be as bad as predicted. Automation could wipe out 70 million jobs, but new innovations could generate new jobs needing to be filled. Biomedical technologies could widen the expanding gap between classes, but if treat them as reconstructive procedures, rather than aesthetic ones, then everyone should have a right to benefit.

That makes you feel better about the future… right?

The new agency wants to push the boundaries of science and technology.
The Future

An average undergraduate student in physics is better than the AI.
Health

These dissolvable pills aren’t meant to be swallowed, though.
Up Next

All you Need to Know about Tinder Super Like?

What is Tinder Super Like? When looking at someone’s profile, swipe up or tap the blue star icon to let you let them know that they stand out from everyone […]