A new report predicts that 60 percent of the meat people eat in 2040 won’t come from dead animals, but rather from plant-based substitutes and cultured meat. “The large-scale livestock industry is viewed by many as an unnecessary evil,” the report states, adding later: “With the advantages of novel vegan meat replacements and cultured meat over conventionally produced meat, it is only a matter of time before they capture a substantial market share.”

The report — conducted by the consulting firm A.T. Kearney, and based on expert interviews — found that “classic vegan and vegetarian meat replacements as well as insect-based meat alternatives” probably won’t disrupt the $1,000 billion conventional meat industry. 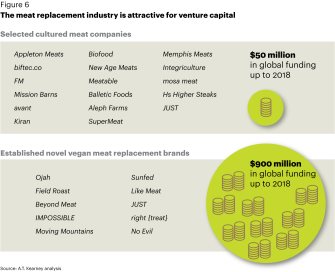 What could? The report identifies two candidates: novel vegan meat replacements, like the Impossible Burger, and cultured meat, which is grown in a lab and doesn’t require killing animals. These unconventional meat alternatives have market potential because they taste similar to conventional meat. What’s more, both are better for the environment than the conventional meat industry, whose supply chain — from feed production to methane emissions to meat processing — requires massive amounts of energy, and it’s unlikely to become any more efficient.

So, for carnivores concerned about the environment, cultured meat could be a way to finally enjoy guilt-free meat. Most consumers seem up for giving it a shot. “Novel vegan meat replacements are marketable due to the trend toward semi-vegetarianism and their sophisticated sensory profile,” the report states. 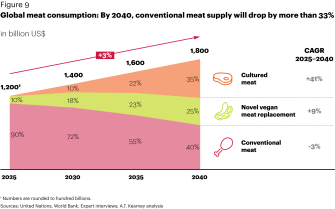 Cultured meat will likely hit markets by 2021, experts say. The meat alternative wields great potential because it requires relatively little arable land and water, and because the production process will only become more efficient as the industry grows in scale.

Meat alternatives offer hope for a looming problem: How are we going to feed the world’s growing population, which is expected to soar from 7.6 billion in 2018 to 10 billion in 2050? Whatever the answer, it’s clear that the inefficiency of the conventional meat industry is a major obstacle, considering more than half of global agricultural production is used to feed livestock, not people.

These dissolvable pills aren’t meant to be swallowed, though.
Up Next
Hard Science

What is the massive thing under the Moon’s surface?

A surprise on the far side of the Moon.