Today, if you want to know when the next solar eclipse is going to be, you turn to Google. If you lived in ancient Greece, though, you might have used a device now known as the Antikythera mechanism.

Considered the world’s first analog computer, this marvel of ancient engineering used dozens of bronze gears to predict the positions of the Moon, Sun, and five planets, as well as the timing of solar and lunar eclipses.

Divers discovered the Antikythera mechanism while exploring a Roman-era shipwreck in 1901, but the ancient computer was in far from pristine condition—only about a third of it had survived the 2,000 years underwater.

Researchers have been trying to understand how the Antikythera mechanism worked ever since—and now, a team from University College London (UCL) may have finally cracked its code.

Here’s what we knew about the Antikythera mechanism prior to this study.

It had at least 30 gears, housed in a wooden case about the size of a shoebox. On the front of the case was a large circular face with hands, similar to a clock. On its side was some sort of handle or knob that could be used to wind the ancient computer.

The device was found in one big chunk that was later broken into 82 fragments. In 2005, researchers took CT scans of the fragments, revealing text that hadn’t been read since before the device landed itself at the bottom of the Aegean Sea.

Using that text—and a Greek philosopher’s math theory—the UCL team created a computer model of the part of the Antikythera mechanism that depicts the cycles of the Sun, Moon, and planets.

“Ours is the first model that conforms to all the physical evidence and matches the descriptions in the scientific inscriptions engraved on the mechanism itself,” researcher Tony Freeth said in a press release.

“The Sun, Moon, and planets are displayed in an impressive tour de force of ancient Greek brilliance.”

To create this new model, the UCL team focused on two numbers on the front of the Antikythera mechanism: 462 and 442.

That’s how many Earth years it takes Venus and Saturn, respectively, to complete one cycle across the sky—but how the creators of the ancient computer knew that information was a mystery.

“The classic astronomy of the first millennium BC originated in Babylon,” researcher Aris Dacanalis said, “but nothing in this astronomy suggested how the ancient Greeks found the highly accurate 462-year cycle for Venus and 442-year cycle for Saturn.”

Re-creating the cycles of those planets (and others) using this one device was further complicated by the fact that the ancient Greeks assumed the Earth—and not the sun—was at the center of the solar system. 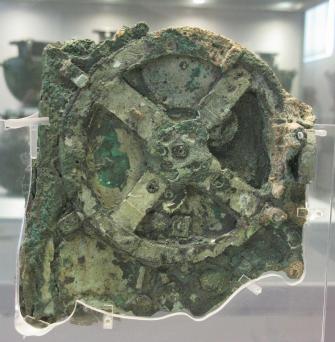 Using a mathematical method described by ancient Greek philosopher Parmenides as their guide, the UCL team devised an arrangement for the Antikythera mechanism’s gears that would cause it to display the correct information about the planets’ cycles.

Their solution also minimizes the number of gears needed for the computer to work, ensuring that they’d all be able to fit within the confines of its wooden case.

“Solving this complex 3D puzzle reveals a creation of genius—combining cycles from Babylonian astronomy, mathematics from Plato’s Academy, and ancient Greek astronomical theories,” the authors wrote in their study. 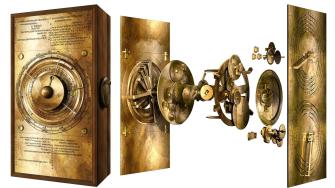 The researchers are confident that their re-creation of the Antikythera mechanism works in theory—but whether the ancient Greeks could have actually constructed the device isn’t so certain.

“The concentric tubes at the core of the planetarium are where my faith in Greek tech falters, and where the model might also falter,” researcher Adam Wojcik told The Guardian. “Lathes would be the way today, but we can’t assume they had those for metal.”

The researchers now plan to prove their model’s feasibility by attempting to re-create it using ancient techniques.

Even if they’re successful, though, other questions about the Antikythera mechanism will remain, including who made it, what did they use it for, and are there others still waiting to be discovered?

Reprinted with permission of Freethink. Read the original article.

The “first-of-its-kind” archeological find is being reburied despite the fact that researchers haven’t finished studying it.
The Well

Darwin, Descartes, and Maxwell all believed in these science ‘demons.’
▸
7 min
—
with
Jimena Canales
Up Next
Hard Science

Did Earth eat the protoplanet it crashed into long ago?

A new study makes a compelling case for the origin of unexplained masses of underground rock causing changes to the Earth’s magnetic field.