Your face is not yours alone — written there are traces of your parents, grandparents, and ancestors. Now a paper published in Nature Ecology and Evolution makes an even broader case. Your face, that so-familiar visage you see in the mirror each day, contains a living, breathing history in its features of humankind’s evolution from the earliest African hominids to, well, you. What’s revealed, its authors say, is that the ability to communicate and thus thrive in social contexts deserves to be given more credit as a key factor in the evolution of our appearance.

A gathering of face experts

The new paper is the work of eight of the world’s foremost experts in the evolution of the human face. At its heart is an attempt to answer a very basic question: Why do we look so different from other, extinct hominins, as well as our primate cousins such as chimpanzees and bonobos? Our faces have gotten smaller over time. The question is why? “We know that other factors such as diet, respiratory physiology, and climate have contributed to the shape of the modern human face,” saysPaul O’Higgins of the University of York, one of the experts involved, “but to interpret its evolution solely in terms of these factors would be an oversimplification.”

University of Arizona’s William Kimbell, also involved in the study, puts it this way: “We are a product of our past. Understanding the process by which we became human entitles us to look at our own anatomy with wonder and to ask what different parts of our anatomy tell us about the historical pathway to modernity.”

Our changing diet is thought to be the primary factor in the reduction in size of our jaws that began as we started cooking and cutting-up our foods about 10,000 years ago. We no longer needed such crushing mandibles to make our way through our omnivorous diet, and the benefit of strong chewing capabilities became less of a factor in natural selection. It’s likely no coincidence that the trend toward a smaller chin accelerated with advent of the beginning of the agriculture. 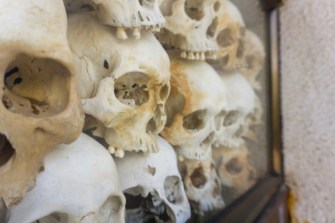 As far as other areas of the face, the story is even more interesting. It seems that our transition to community living mandated a greater ability to communicate well. While the scientists hypothesize that the strong brows of Homo erectus and the Neanderthals were effective for communicating aggression, strength, and domination — as we see in the great apes — these signals were no longer as beneficial to humans as we began to gather into communities.

“We can now use our faces to signal more than 20 different categories of emotion via the contraction or relaxation of muscles”, O’Higgins says. “It’s unlikely that our early human ancestors had the same facial dexterity, as the overall shape of the face and the positions of the muscles were different.”

The changes to our physiology have endowed us with the ability to communicate far more effectively in groups, and it’s easy to imagine how getting along with others led to a greater chance of reproducing. Before the arrival of language, in particular, the ability to facially communicate friendliness, sympathy, and other feelings was critical in gaining others’ acceptance. 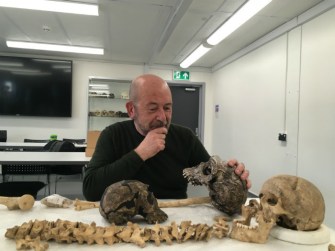 O’Higgins looks back, and forward. Image source: University of York

Are we there yet?

According to O’Higgins, most likely we’re not done evolving. “There are limits on how much the human face can change, however. For example, breathing requires a sufficiently large nasal cavity. However, within these limits, the evolution of the human face is likely to continue as long as our species survives, migrates and encounters new environmental, social and cultural conditions.”

So, that face. Your face. It’s part of a long, ongoing story starring your ancestors and their ancestors. It’s an interesting way to see that person looking back at you from the mirror.

The artifacts were often made from found objects – an Ivory dish-soap bottle transformed into an earthenware figure.
Health

Was our distant ancestor a biped or not – i.e., human or not human?
Up Next
Neuropsych

10 Krishnamurti quotes on the meaning of life

The Indian philosopher had a lot to say.