The origin of the roughly 35,000 ancient monuments that dot Europe and the British Isles has long been a haunting mystery. From the Ring of Bodnar in the Scottish Orkney Islands to Stonehenge in the English countryside, to the Carnac stones in France, these ancient monuments have fascinated people for as long as they’ve been known.

Remarkably, there’s never been a serious effort made to date all of these structures in order to establish a single credible prehistoric timeline. Now, however, Bettina Schulz Paulsson has done exactly that using radiocarbon dating, lining up the sequence in which 2,410 of these sites were constructed. Her research has just been published in Proceedings of the National Academy of Sciences on February 11.

As it turns out that it all started with single hunter-gatherer culture in an area now known as Brittany, France some 7,000 years ago. 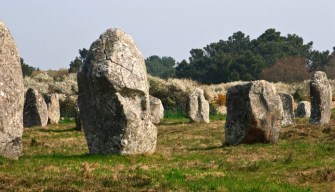 The timeline tells its story

Among the earliest of the European megaliths are apparently the Carnac stones in Brittany, which date to about 4,700 BCE. Even older are complex earthen tombs, dolmens, in the same region that go back about 5,000 years — Paulsson figures they were all built in a relatively brief 200- to 300-year period. From there, the timeline reveals, construction spread outward, with building styles evolving gradually over time. 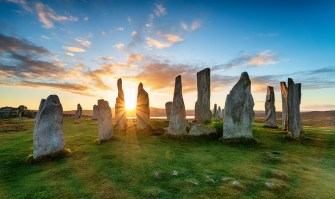 Callanish on the Isle of Lewis in Scotland. Photo credit: Helen Hotson via Shutterstock

Different and the same

Prior to her research, most experts thought megalith construction had begun in the Mediterranean or the Near East. Otherwise, theories centered on the idea that they had been developed independently across Europe. And yet they shared certain characteristics that suggested a link. The research cites “an orientation of the graves toward the east or southeast in the direction of the rising sun.”

In addition, the Brittany region is the only one with evidence of pre-megalithic building that could have led to the megaliths.

Chronology isn’t all that supports Paulsson’s conclusion. The original megaliths from Brittany are etched, surprisingly, with ocean imagery, including sperm whales and other ocean creatures. This suggests that their builders were part of seagoing culture, an activity not previous suspected.

One of the odd questions about megaliths has been why they’re so concentrated near coasts, and the revelation that the people who started it all were seafarers helps explain this. Paulsson was able, for example, to see in the chronology the emergence of certain monument styles at the coastlines which then spread inland.

By 4,300 BCE, monuments were appearing along the coasts of southern France, the Mediterranean, and the Atlantic side of the Iberian Peninsula. This happened, says Paulsson, in three waves.

The first wave occurred in the fifth millennium BCE, with megaliths unlike previous local structures appearing in “Catalonia, southern France, Corsica, Sardinia, and probably the western Iberian Peninsula and Italian mainland.” In the fourth millennium BCE, passage graves were constructed “along the Atlantic coast of the Iberian Peninsula, Ireland, England, Scotland, and France. “By the second half of that millennium, they’d reached Scandinavia and the Funnelbeaker areas. Stonehenge dates back to about 2,400 BCE.

Maritime diffusion demonstrated in Paullson’s research pins down the development of the megaliths, and also sheds new light on the seagoing nature of Brittany’s hunter-gatherers and those with whom they came in contact. As the paper says, “The megalithic movements must have been powerful to spread with such rapidity at the different phases, and the maritime skills, knowledge, and technology of these societies must have been much more developed than hitherto presumed.”

…and hopes for big benefits.