Before Alexander the Great established Alexandria around 331 BCE, one of Egypt’s primary ports on the Mediterranean Sea between the sixth and fourth centuries BCE was a place called Thônis-Heracleion.

Now researchers from the European Institute for Underwater Archaeology (IEASM), the same organization that first found the city in 2001, have announced the discovery of a couple of fascinating items from the city’s heyday. Pinned beneath fallen temple stones is a surprisingly intact Egyptian military vessel from the second century BCE, and researchers have excavated a large cemetery from the fourth century BCE. 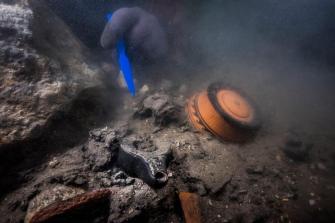 Thônis-Heracleion was one of the two primary access points to ancient Egypt from the Mediterranean. (The other, Canopus, was discovered in 1999.) For millennia, experts assumed Thônis-Heracleion were two different lost cities, but it’s now known that Thônis is simply the city’s Egyptian name, while Heracleion is its Greek name.

Thônis-Heracleion had been the stuff of legend before it was located, mentioned only in rare ancient texts and stone inscriptions. Herodotus seems to have been referring to Thônis-Heracleion’s temple of Amun as the place where Heracles first arrived in Egypt. He also described a visit there by Helen with her lover Paris just before the outbreak of the Trojan War. In addition, 400 years later, geographer Strabo wrote that Heraclion, containing the temple of Heracles, had been located opposite Canopus across a branch of the Nile. Today we know Thônis-Heracleion’s location as Egypt’s Abu Qir Bay. The sunken port is about 6.5 kilometers from the coast and lies beneath ten meters of water.

It was perhaps just as well, given that natural forces eventually destroyed Thônis-Heracleion. Located on the Mediterranean, the ground upon which it was built became saturated and eventually began to destabilize and liquefy. The temple of Amun probably collapsed around 140 BCE. A series of earthquakes sealed the cty’s’ fate around 800 CE, sending a 100 square-kilometer chunk of the Nile delta on which it was constructed under the waves. The Mediterranean’s rising sea level over the next couple thousand years completed the drowning of Thônis-Heracleion.

Researchers have recovered a large collection of Thônis-Heracleion’s treasures revealing an economically rich culture. Coins, bronze statuettes, and over 700 ancient ship anchors have been pulled from the waters. Divers have also identified over 70 shipwrecks. A giant statue of the Nile god Hapi took two and a half years to bring up.

An ancient vessel and a cemetery 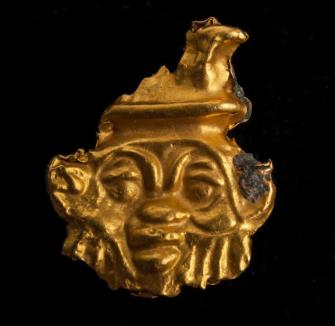 The newly discovered ship was found beneath 16 feet of hard clay, “thanks to cutting-edge prototype sub-bottom profiler electronic equipment,” says Ayman Ashmawy of the Egyptian Ministry of Tourism and Antiques.

The military vessel had been moored in Thônis-Heracleion when the temple of Amun collapsed. The temple’s enormous blocks fell onto the ship, sinking it. The boat is a rare find — only one other ship of its period has been found. As underwater archaeologist Franck Goddio, one of the scientists who found the city, puts it, “Finds of fast ships from this age are extremely rare.”

At 80 feet long, the boat is six times as long as it is wide. Like its dually-named city, it’s an amalgam of Greek and Egyptian ship-building techniques. According to expert Ehab Fahmy, head of the Central Department of Underwater Antiquities at IEASM, the boat has some classical construction features such as mortar and tenon joints. On the other hand, it was built to be rowed, and some of its wood was reused lumber, signature traits of Egyptian boat design. Its flat bottom suggests it was built for navigating the shallows of the Nile delta where the river flows into the Mediterranean.

Also found alongside the city’s submerged northeastern entrance canal was a large Greek cemetery. The funerary is adorned with opulent remembrances, including a mask made of gold, shown above. A statement by the Egyptian Ministry of Tourism and Antiques describes its significance, as reported by Reuters:

“This discovery beautifully illustrates the presence of the Greek merchants who lived in that city. They built their own sanctuaries close to the huge temple of Amun. Those were destroyed simultaneously and their remains are found mixed with those of the Egyptian temple.”

Excavation is ongoing, with more of Egypt’s ancient history no doubt waiting beneath the waves.

Successful forgers are remembered as great conmen, not artists. This is strange, considering their forgeries fooled even the most seasoned critics.
Up Next
The Future

We are likely to see the first humans walk on Mars this decade.