Though most of us value gender equality, men and women are seen as so radically different in our society, it’s a wonder they get along at all. Anyone who has been unlucky in love at some point, the lot of us, has decried these differences. Of course, the book Men are From Mars, Women are From Venus capitalizes on this notion.

But how much of it is nature and how much nurture, or the instilling of gender roles? After all, in our family, I do all the cooking, as my wife has no idea what the word means, outside of the use of our microwave. Meanwhile, when it comes time to put the new furniture together, I get out my toolbox and sheepishly exit the room.

It has been thought since the early days of medical science that men and women are vastly different, neurologically speaking. Case in point, if handed a brain without any information, biologists in the 19th century claimed to be able to identify the sex of the person it once belonged to. Men’s brains are 10% larger on average. But bigger does not mean smarter, as the differences between an elephant’s and a human’s brain clearly illustrates.

IQ tests have consistently shown that men’s and women’s intellect measure up pretty much the same, despite what my wife thinks. So are men’s and women’s brains so radically different? The advent of brain imaging technology had researchers racing to find out. They discovered that structural variance is slight and there is a lot of overlap. 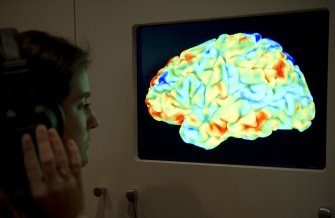 A 2015 study illustrates just how alike our brains are. Tel Aviv University researchers, led by Daphna Joel, took already existing MRI brain scans and measured the amount of gray and white matter within each. 1,400 scans were studied. Researchers examined 116 parts of the brain in each image. Gray matter is made up of neurons or brain cells, while white matter is the “wiring” or connects between them. Scientists also looked at long range connections between various regions.

The Israeli team found that structurally, the brains in men and women are more or less the same. There were a few, slight differences. Though women are thought to be the more emotional of the two, men have a larger amygdala—the area associated with emotions. The left hippocampus, responsible for memory formation, was also larger. Yet, with each region, researchers found substantial similarity and overlap. Some men had a smaller left hippocampus than the average woman’s, while some women had a larger one than most men.

Next, researchers decided to list those features thought typical in males and females. Then, they went searching for these structures in MRI images, scoring each individual region-by-region on whether they exhibited male or female traits. What they found was that for the most part, each brain was a hodge-podge and totally unique. Over 98% did not display typical gender-associated structure. Conversely, between zero and eight percent had structures fall strictly across gender lines. Dr. Joel concluded, “There is no one type of male brain or female brain.” 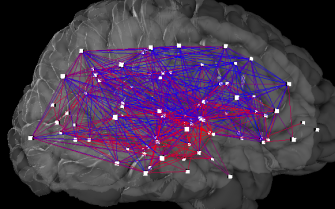 Computer model of the connections in the brain. Image by PIT Bioinformatics Group – Own work, CC BY-SA 4.0

Joel also tried to account for supposed male and female behavior, but could find no consistency there either. Researchers tested two large datasets for stereotypical behaviors. These included scrapbooking and talking on the phone for women, and playing video games and gambling for men. Only 0.1% of subjects took part in only stereotypical behaviors. “There is no sense in talking about male nature and female nature,” Dr. Joel said.

The nurture side of the argument may have won, if not for a 2015 study, conducted by Ragini Verma, PhD and her team at the University of Pennsylvania. They discovered that men and women have different brain circuitry. Researchers scanned the neural connections of 2,000 participants, while they performed certain mental tasks. These were young adults, teens, and children. Verma and colleagues found that gender differences originate in the connectome, or our “brain road maps.” They argue that these differences, though subtle are distinct. 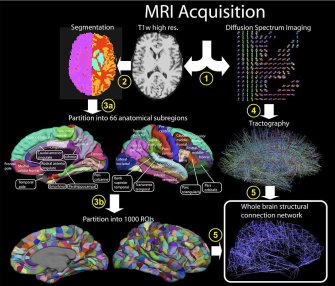 According to this research, males have more connections moving from the front to the back of the brain. This makes them more perceptive to what’s happening in the environment, and better able to alter it by employing motor skills—those which require hand-eye coordination. Women have more connections moving left to right. These meld the two hemispheres together, allowing women to pull information from a multitude of sources and draw conclusions.

This may be where “women’s intuition” comes from, a phenomenon which could be the putting together of emotional intelligence with logical thinking. Women also have slightly larger amounts of gray matter, particularly in the hippocampus, which plays a role in memory formation, which is why gentleman, your wife will never forget how badly you loused up that one time, six months ago or even six years ago.

This is also the area responsible for attention, social cognition, and empathy, which may be why women understand and respond better to other people’s emotions. These findings could help in the development of better treatments for certain psychiatric and behavioral disorders that are more common or develop more quickly in one sex over another. This study built upon a previous one which found subtle yet distinct differences between men’s and women’s connectome. Verma says that of course, as with anything to do with humans, there is tremendous overlap, as well as differentiation and variation to the extreme. 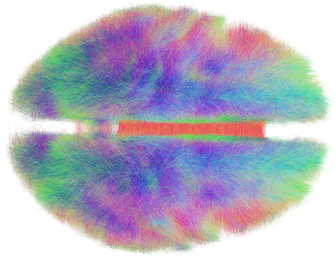 The human connectome. Image by Andreashorn – Own work, CC BY-SA 4.0

The Israeli study finds that family and culture play a large part in brain development, including sex differences. When the same thoughts, feelings or actions take place over and over again, these pathways in the brain become stronger and more pronounced. So in this view, male and female brains start out similar, but change over time due to how the person is treated, what expectations they live under, and the tasks they perform over and over again. These alter the connections inside the brain.

Otherwise, they might be inherent to sex. Before puberty, boys and girls brains look remarkably similar. So herein lies a paradox. What changes the brain connections over time, mere biological sex or is it how we are raised, and what experiences we have? So far, we’ve concluded that some few, subtle differences exist. Much more research will have to be conducted before we know whether gender differences in the connectome, however subtle, are due to nature or nurture.

To learn more about the differences between men’s and women’s brains click here:

Nikolaas Tinbergen’s concept of “supernormal stimulus” explains why humans are attracted to a heightened version of reality.
Videos

Reality is more distorted than we think.
▸
with
Big Think
The Future

The term ‘AI’ overpromises: Here’s how to make it work for humans instead

Is there actually anything deserving of the term AI?
The Past

The misguided history of female anatomy

A textbook pregnancy consists of three trimesters. The baby develops at a relatively predictable rate during this time, from pomegranate seed to avocado to watermelon. And mom’s body adapts accordingly […]
Up Next
Politics & Current Affairs

According to environmental activist and author Bill McKibben, the third world war is well underway: it is a battle between human beings and a changing climate, and the humans are losing. But there’s still hope.