In America, work hard, get good grades, and you’ll be well on your way to success. That’s the story, anyway. According to “Born to Win, Schooled to Lose,” a new study from Georgetown’s Center on Education and the Workforce (CEW), it’s little more than a fairy tale. These days, “To succeed in America, it’s better to be born rich than smart,” says CEW director Anthony P. Carnevale. The authors found that “people with talent that come from disadvantaged households don’t do as well as people with very little talent from advantaged households.”

“People tend to blame the schools, and they are at fault for not saving people who start out smart,” he tells CNBC. “But there are also a variety of factors that have to do with race and class and gender and everything from books in the home to how many words you know when you’re in the first grade, too. Disadvantage and advantage are very complex.” 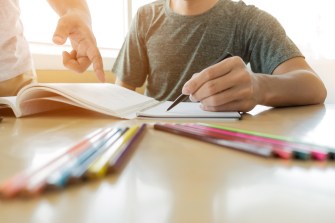 Even CEW’s modest standard for success — getting a college degree, and then an entry-level job — is difficult for many kids of lower socioeconomic status (SES) to achieve. The odds are even worse for Black and Latino kids. It will come as no surprise to families from a lower SES that their children have to work harder and simply be better to stand a chance of competing with kids handed educations and opportunities, not to mention money. The deck is stacked against them.

“Stunningly, a child from the bottom quartile of socioeconomic status who has high test scores in kindergarten has only a 3 in 10 chance of having a college education and a good entry-level job as a young adult, compared to a 7 in 10 chance for a child in the top quartile of socioeconomic status who has low test scores,” says the study.

Even for brighter children from poorer families who start out strong, “the chances of keeping those high scores are relatively slim.” Fortunately, the fact that a child’s test scores are likely to change over time suggests an upside: An opportunity for intervention with additional support. As Carnevale says, “When we follow these kids over all those years, grade by grade, what we find out is they all stumble. The difference is between who stumbles and gets back up again and who stumbles and doesn’t.” Children of wealthy families typically enjoy a softer landing when they fall, since any help they need is within their families’ economic reach. 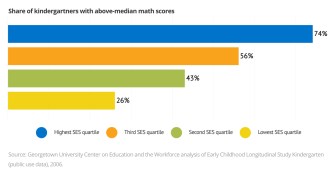 CEW’s research indicates that many non-wealthy children with good grades in kindergarten are no longer among the best-scoring students by the time they get to high school. Therefore, CEW tracks students across this period.

Even in kindergarten, disparities already exist between the tracked SES quartiles, and these ratios remain throughout the period studied. The lowest scores are always found with the lowest SES, and the opposite is also true. Still, an impressive 43 percent of children in the next group up, the second SES quartile, attain high scores. 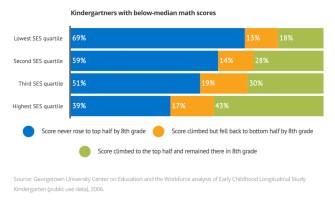 CEW’s data shows that by the time students are in junior high, a clear shift has occurred, and 43 percent of the best students now come from the upper SES quartile, with the previously promising second quartile’s high scores having dropped back to just 28 percent of its children. About 60 percent of that group never reaches the upper academic ranks at all, and others only briefly. 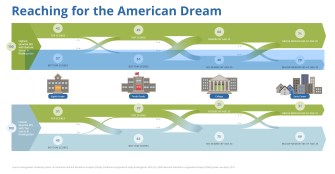 By high school the lifelong trend is pretty clear. By then the lowest quartile gets 63 percent of the bottom scores, and of the 37 percent who do maintain good grades, only 25 percent get a college degree by age 25, and just 31 percent wind up above the median SES level as adults. Of that same 37 percent, 75 percent don’t get a degree by 25.

For the well-off, however, this is all flipped: Their bottom scorers have a 60 percent of getting a degree, and 71 percent end up in the above-median SES.

What’s to be done

CEW has four recommendations for leveling the playing field and giving the non-advantaged a better shot at success.

You can view the full report here.

Much like energy and nutrients flow in a continuous cycle between the elements of a natural ecosystem, a free flow of knowledge fuels the growth of a learning ecosystem.
Up Next
Health

Medical science finally acknowledges what workers have known for years.